HOW MENTAL CLARITY CAN BENEFIT US 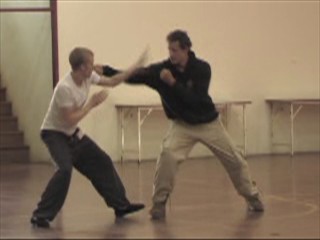 What many martial artists may not realize is that mental clarity is actually more important in martial arts than in scholarly pursues. Mental clarity is manifested here during a sparring session between Nick and George at the Sabah Intensive Shaolin Kungfu Course of March 2007


An important theme of this thread is mental clarity. We have to thank Baguamonk1 for that. Responding to his posts which show a lot of ignorance and untruths enables us to practice mental clarity.

Let us take some examples from Baguamonk1's previous post.

Without mental clarity, one may mistake Baguamonk1's advice as valuable. But with mental clarity we can easily tell that Baguamonk1's words above are hollow and meaningless, although they may sound grandiose. Baguamonk1 has a bad habit of giving grandiose advice which is often wrong, and he may not actually realize what he himself is saying.

Baguamonk1 guaranteed that it would get you far if you followed his advice. If you have mental clarity you would not be misled by him. You would ask, for example, what credentials he had to give such advice. You would think twice before listening to someone who cannot even make statements clearly and coherently. And most significantly, you wouldn't listen to advice by someone whose posts reveal so much ignorance and untruths. 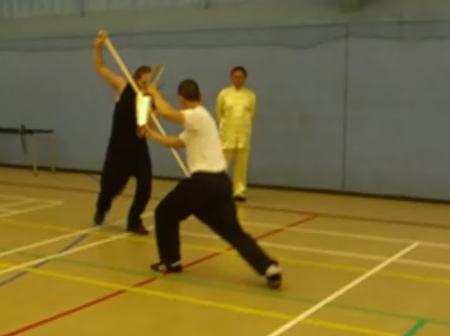 Mental clarity is even more important when sparring with weapons as shown here Martin using Butterfly Knives against David using a spear with Granmaster Wong looking on from behind during the UK Weapon Course of July 2007. The sparring here is not pre-arranged. A lack of mental clarity may lead to serious injury. The mental clarity derived from such training, of course, can be transferred to our daily life.

Let us take another example, and see how an exercise on mental clarity can benefit us.

The very nature of education is to let someone tell us what is right and what is wrong. Of course, this someone is not anyone. It is certainly not someone like Baguamonk1 whose posts show so much ignorance, untruth and lack of mental clarity.

When we were young, this someone is someone whom we trust and who has authority, like our parents. Later he (or she) is someone who has mental clarity and wisdom, like great teachers.

Yet, when we are sufficiently wise to make correct judgment, we do not accept the advice and teaching of this someone based on faith alone. We assess his advice or teaching to the best of our understanding and experience.

Baguamonk1 advised that you figured out what was right or wrong for yourself. His advice sounds grandiose but it is not good advice. Not only it may cause you to waste a lot of time, but also you will miss benefiting from the accumulated wisdom and experience of past masters.

Mark is wise. Instead of attempting to be smarter than masters and trying to figure out by himself, he listened to masters whom he can trust to tell him what is right and what is wrong. And he happily reported:

"I've practiced for a year and a half, and now I can feel internal force flowing inside of me. I was told it would happen, and it happened."

This thread has benefited and helped me greatly. I am sure many forum members have found this thread useful and beneficial too.

Don't you find it a big irony that Baguamonk1 tries to teach others how to think when his posts show that he himself cannot think clearly? For example his statements suggest his thinking is not clear enough to know that the various posts in this thread may help us to have mental clarity so that we can better think for ourselves. Baguamonk1 confuses this with relying on others to think for you, which is precisely the opposite of what these posts can help us achieve.