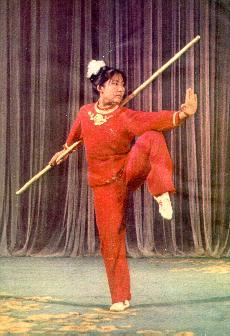 A beautiful wushu pose taken from a magazine

For some odd reasons, some people take objection to the mention of an art being elite. They want their art to be commonplace. That is their view, and we do not wish to argue with them. But for us, we are proud that we practice an elite art, and we are not afraid to admit it.

Unfortunately many practitioners today fall into this category of newer generations of people without the knowledge and actual experience of the past generations and heritage, and who often discard the old traditions and philosophies without even trying to understand them. For example, many lack the knowledge and experience of traditional Chinese martial arts, and discard them for modern sports like Kick-Boxing and Wrestling. To us, it is like discarding gems for stones.

Your comments confirm an important theme that we in Shaolin Wahnam often express, and that is the arts we practice in Shaolin Wahnam are elite and rare. For some odd reasons, some people take objection to the mention of an art being elite. They want their art to be commonplace. That is their view, and we do not wish to argue with them. But for us, we are proud that we practice an elite art, and we are not afraid to admit it.

In Shaolin Wahnam we do not merely study these arts and philosophies, or just talk about them. We practice their essence. In Shaolin Kung fu and Wahnam Tai Chi Chaun we apply picture-perfect Shaolin and Tai Chi Chaun techniques, including proper stances, for combat. In our chi kung we enjoy chi flow. In our daily life we are relaxed, happy and free, which are characteristics of Taoist teaching, and we are simple, direct and effective, which are the hallmarks of Zen.

I am glad of your statements here. They show similar views with what we hold in Shaolin Wahnam.

We would also like to thank you for your compliments that what we train is more authentic.

Yes, here we agree with you that these government-placed monks practice modernized wushu and not traditional kung fu.

We are also aware of the trick you described, but we prefer not to highlight it.

Of course, real kung fu practitioners do not need such tricks. In traditional kung fu circles, these tricks are known as "strongman shows". 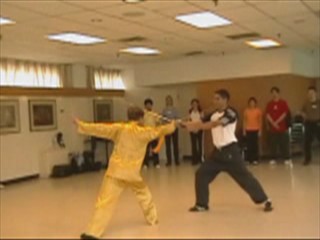 Please consider that if Sifu Jordan, or the members on this forum were really attacking you personally, they would have simply asked you to leave the forum.

But, because the objective is only to dispel ignorance and untruths , you will notice that the posts made by Sifu Jordan focus on pointing out areas of discrepancy in your own writing, as well as offering the Shaolin Wahnam perspective for juniors and students of this family.

Furthermore, Sifu Jordan has even thanked you for the areas in which your thoughts were expressed with clarity and precision. Please see below:

In fact, your comments were so strong and derogatory towards wushu exponents that Sifu Jordan had to temper your words and clarify (yet again) that wushu, though "vastly different" from traditional kung fu, is still a "magnificent" art.

This is not about making personal insults towards you or to other people like the wushu exponents. This is about the skillful presentation of truth. Though what you said about wushu may be true, it was unskillful, emotional and could easily be deemed as a personal attack towards all wushu exponents.

Shaolin training is rigorous, Baguamonk1. It is not a path for buttering up the ego, but rather a path for learning how to see and move beyond the ego.

Baguamonk1, from one warrior to another, let me ask you this:

How about learning to see and appreciate the areas of your writing that are clear, just as Sifu Jordan has done?
How about letting more of that same lucidity shine through your thoughts and words from now on?