DEFEAT YOU HAND TO YOUR OPPONENT; VICTORY YOU CREATE YOURSELF 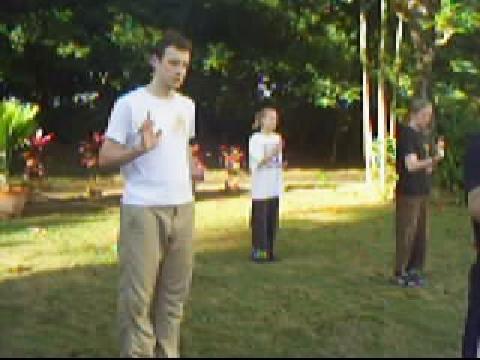 Course participants practicing One-Finger Shooting Zen. George is in the foreground, behind him are Nick and Molly.

This is going to have to be really short because we are now waiting for the bus to take us to the graduation dinner.

I just wanted to write about Sifu's teaching methodology in this post. For the senior Wahnam students, I am sure it is very obvious but even for a novice like myself, I can see how Sifu continually improves his teaching. I wrote yesterday about how Sifu applied Taijiquan training methods to the more difficult Shaolinquan techniques. It is nothing short of innovative, but more importantly, it highlights how Sifu always seeks out the best methods for his students. I know of masters who take an extremely partisan approach to their teaching, and refuse to budge from the traditional ways of teaching.

I must stress though that I am not saying that one should abandon the rich legacies of the past masters in a blind attempt to be creative. The training methods passed down by masters were perfected through centuries of trial and error and blood was shed for these methods. At the same time, though, martial arts is a living thing, and masters have evolved it for each generation of civilization.

I am still organizing my thoughts and will need to trawl them for the exact details but there is one thing that stuck in my mind. This morning, when teaching us the One-Finger Zen, Sifu said that we begin with the right hand. Then he said something seemingly innocuous that held great significance for me: “I am not sure of the effect if we begin with the left hand. I have not gone deep enough into this to know.” For some reason, that simple statement hit me like a thunderbolt. It was a statement of such humility, coming from a celebrated master who has practiced this art for 40 years and has mastered it. The statement was also an embodiment of the perfect student — to practice exactly as he was taught by his master. I found myself reflecting on the fact that Sifu had made so many revolutionary changes in the teaching of Shaolinquan but taught this art exactly the way it was passed down. A great master knows what to teach, what not to teach and of course, how to teach. Another statement that keeps echoing in my mind was this: “I teach this way because this was how my Sifu taught me.”

Just yesterday, Sifu reminded us that we should practice what the master instructed and not to try and be smarter than the master. All of us students have heard Sifu say this so often but he never fails to reiterate it. There is definitely something to it, and as Ronan said at the graduation dinner, don't spend years going in circles just to realise this truth. Just practising what Sifu told us to practise is going to take my whole lifetime. There is no time to waste in trying to be clever.

I will try and make this as coherent as possible, however my timing skills are off and it is gone 01:30.

So, this was it, the last day of the course.

We were taught the second part of One Finger Shooting Zen. Emphasis on total relaxation and no use of muscular force.

We also practiced forgiveness (yourself, or others) during the standing meditation part. A very joyful experience, but not one I have the skill to put into words.

Sifu gave an interesting talk on strategy, whether in mass, or personal combat.

We learned sequences 11 and 12 and combined 9-12 into the Happy Bird Hops on Branch set.

Practiced adding surprise kicks against the attacker in a sequence.

Sifu taught us and alternative 'soft' counter for the kick in sequence 12.

Learned sequences 13 and 15 and did some break-fall practice.

Then the usual self-choice practice. I'm afraid by this point it got a little too much for me. My brain shut down to the point that it was easier to do free sparring with patterns from 1-16 than to actually follow the rules Sifu set for the practice.

Sifu re-stated an important principle that was covered very early in the course, but one that I forgot when writing my notes: first make sure you do not give your opponent any advantages and only then seek to find advantages from yourself. In one way this is an extension of the "safety first" principle but it is more than that. Your defeat is handed to your opponent, but you must put in effort to gain victory. 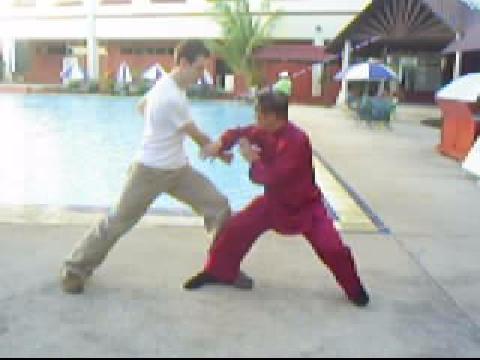 The great strategist, Sun Tze, says that defeat is what you hand to your opponent, whereas victory is what you have to create yourself. Here Grandmaster Wong demonstrates and explains how you would not hand out your defeat, then you create your victory.

Sifu Ronan gave a demonstration of the Tiger-Crane set.

By the time the morning class finished I was not feeling all that great mentally/emotionally. I sort of stumbled back to my room where I fell on the floor and cried lots, then wailed a bit and then cried some more. After about 15-20 minutes I finished with that, washed all of the gunk off my face and went and dived into the pool to get rid of the gunk on my body (sorry fellow pool users.) I then went to Tesco and discovered a cake shop. There I bought a slice of cake, with lots of cream and chocolate on it (the wrapping even had pink hearts on it,) which I took back to my room and ate in happy solitude with lots of green tea.

Training in the afternoon was easier. I felt much better.

We learned sequences 14 and 16 and combined 13-16 into the Felling Tree with Roots set.

Then we practiced sequences 1-16 from self-choice all the way to free sparring, using the methodology used by Sifu throughout. Thus Sifu's secret plan to get us to free spar without realising it was revealed.

Then, for most of the remaining session we practice applying Kungfu techniques against basic techniques of other martial systems: boxing, taekwondo, kick-boxing, a knee attack from Muay Thai and a wrestling frontal take-down. Many thanks to Sifus Mark and Ronan (who are also extensively trained in all these systems) for the demonstrations of real combat application.

The experience was humbling actually. Even though most of us imitated the techniques from these systems quite badly, it was not as easy countering as I thought it would be (with the exception of boxing, which was fairly straightforward.) The counters themselves are very easy and straightforward, but my level of skill is too low to execute most of them properly (mainly footwork and timing problems.) That said it worked brilliantly when Sifus Mark and Ronan were using them on each other (not to mention Sifu, who just slices straight through whatever technique is thrown at him,) so it is just a question of practicing the skills, which I would be doing in my normal practice anyway.

We practiced 3 levels of progression: avoidance, interception and counter-attack. In some cases a "coup de gra" attack was possible (e.g. kicks against a boxer.)

It was very weird (in an unpleasant way) using these non-Kungfu techniques. They feel empty, as if the energy has been turned off. It hurt so much more when sparring against Kungfu techniques. The attacker would also be short for breath after a few minutes, despite being able to spare vigorously for hours at a time in our Kungfu practice without this happening.

We finished the session with our own practice - whatever we felt like doing (naturally with a nice chi-flow at the end.)

In the evening we went to a lovely Chinese restaurant for our graduation meal, and ate fantastic genuine vegetarian food (no sea-chickens here!)

I'm not going to write about it - it was lovely. Apparently, we (as a course) surpassed Sifu's expectations.

This is it. Tomorrow I start my holiday.