THE PREVIOUS DAYS ARE ALL STARTING TO MERGE INTO ONE 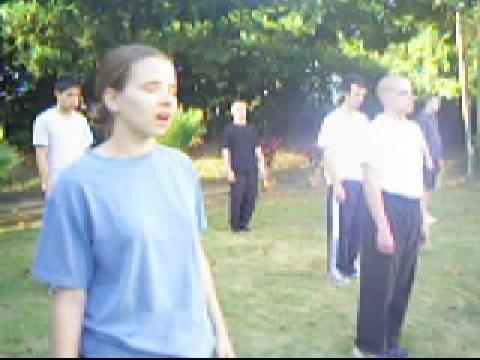 Another day, another post. Just in case anyone wondered, this is not just my personal thread - it would be really nice to hear from other people on the course. My perspective is limited by my own ability, so I am probably missing lots of interesting stuff out.

Today, our usual stance practice was done with the appropriate hand-forms.

During the chi-flow stage after, a few of the people had a spiritual expansion' experience. Sifu talked about these in more detail, but I will not attempt to summarise.

Lohan Asks The Way set was next, this time with emphasis on the breathing. We practiced performing the set in 8 breaths, then in 4. Each breath was in 4 stages: in, follow, explode and swallow.

In the afternoon we had a very tasty lunch at yet another Chinese restaurant. We then visited the Kek Lok Si Padoga complex. It was nice, if a little crowded by people trying to sell you touristy junk. Lots of new constructions, but I felt the site of bits of reinforced concrete all around, spoiled it a little.

In the afternoon Sifu produced an instantly classic phrase, while lamenting the lack of force in our sequence practice: "This is Shaolin Kungfu, not opium smoking!"

Working with sequences 1-4 we progressed to self-choice, modification (e.g. sequence 3 4 on the fly,) moving in with a surprise attack and then a mix of all of it.

Learned sequences 5 and 6. Pressing attacks were introduced and beautifully demonstrated by Sifu.

Practiced sequences 1-6 with self-choice and continuation. With this we practiced attacking with 2 sequences one after the other and then dropping any one of the patterns in the first attacking set.

Now for a little personal perspective. During the second session I hit the point of no longer being able to keep up with the skills transmitted. The brain overflow is usual for me, except I expected it to happen much sooner than this. What is amazingly different about this time, is that despite the overflow the new information kept going in. Usually, once I reach this point I simply stop absorbing information, nothing will go in (this happened a lot during my time at university.) Yet Sifu managed to keep transmitting more and more skills. I know that I have learned them (although I am not sure how I know this,) it is just that my body can not yet keep up.

The previous days are all starting to merge into one, but again, whereas I would usually start forgetting the things I learned (again e.g. university lectures,) in this case I am merely forgetting when I learned them. The information itself is clinging to my brain with remarkable determination. I could be due to my notes and these posts here, but I have a feeling that alone would still not be enough, as I haven't re-read them yet. Very strange (in the nicest possible way.)

First I would like to thank you for sharing your experiences at the Intensive Shaolin Kungfu Course. Your openness is much appreciated and admired especially when doing so in a public forum.

After reading your posts, I found myself thinking back to my past courses with Sifu. They have been fun, inspiring, and uplifting, yet, at times, very challenging. It is interesting that I usually find when the Shaolin training becomes more and more challenging, it is a sign of breaking through or emerging to the next level. I have also observed this interesting pattern in my fellow classmates.

The funny thing is the person who is experiencing this transformation may think he/she is not doing well and may become frustrated. On the contrary, he/she is doing very well and is about to have a breakthrough. In my opinion, all that person needs to do is march along the best way that he/she can. At any rate, it's inspiring to be a witness of this change in a fellow Shaolin warrior.

It is always interesting and inspiring to hear of personal success stories from Sifu's courses. Thank you for sharing yours.

Great to hear from you George, I only saw you a few weeks ago in England at the 3 Nations Gathering, now look at you !!!

What you are sharing with us excellent stuff, please continue to share your experiences with us, and anyone else who is also taking Sifu's Intensive Kung Fu course.

Click here to view a thread which shows how one may prepare for a course in Malaysia with Sifu, methods which George himself has followed to help him get ready.

George very kindly allowed me to write this post even though he was first in the queue. I know I said I would not post until I got home, but there are two reasons why I just had to.

First, Sifu encouraged us to contribute our experiences, and second, I am just too inspired by SIfu's teaching today to go to bed without recording it.

I will let George post his excellent account of what we learnt today. I will share how Sifu introduced a teaching methodology that I am 100% certain has never been seen before. He told us to practice our Combat Sequences 5 to 8 as if they were Taijiquan patterns. Immediately, that changed everything for me, and it is not just because I am a Yang Taijiquan student.

Suddenly, it became crystal clear what he meant by flowing movements. The way Sifu explained it is so brilliant that I have difficulty putting this in words. He said that if our movements are flowing, our very attack or defence merges with the cosmos, and even our breathing is attuned to the flow of the universe.

I will have to continue this tomorrow, as I am taking longer than expected. Over to you, George. 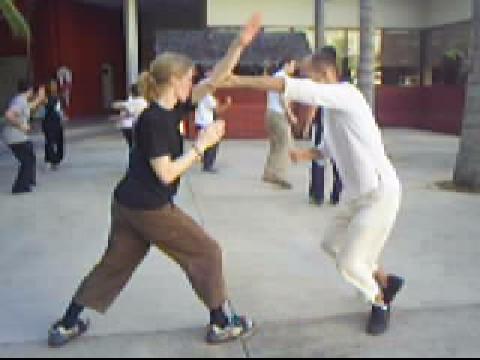