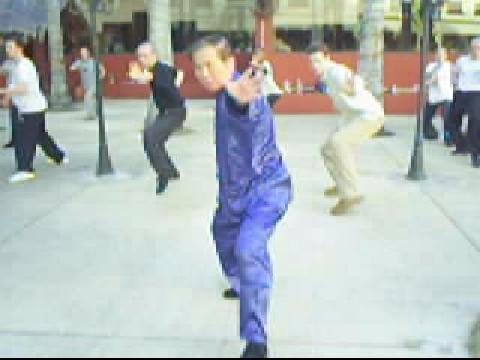 Arrgh - I lost 3 whole pages after spending an hour here typing my post waiting for George to turn up. I am not trusting this terminal from now on. I will post when I am back home. 3 pages..sob sob.

Poor Wuji. I was looking forward to reading what he had to say.

So, day 2. Just as Sifu Andrew said, it got a little harder. Not physically, mind you, which is a little strange. Despite my extreme laziness in my personal practice I seem to somehow have picked up enough force to keep going (only goes to highlight the quality of the Art itself.) The difficulty was mental. Some of the material covered today I was previously only vaguely aware of in theory, so I got pushed out of my comfort zone. Even had a little low point in the afternoon, although I felt better towards the end.

The morning started with Lifting the Sky (I have come to love Jordan's chi-flows, although there was no singing today from anyone) and stance training.

The rest of the day was spent on strikes and their combat application.

We moved from striking a few inches away, to striking through. I'm sorry to say my control is quite bad, as a few people found out - sorry guys, I will get better.

Sifu discussed in much detail the 4 modes of preparation and the 3 arrivals, as well as spending quite some time on applying these principles to our daily lives outside Kungfu (this is one of the very special advantages of Wahnam training.)

Between training sessions we were driven to lunch in Georgetown and then for a trip to the Butterfly Farm. There was lots of (you guessed it) pretty butterflies flying all around us, but also ducks, big fishies, lizards, hairy spiders in jars (alive,) very zoned-out squirrels, cute turtles with pig snouts and more stuff. The cartoon warnings about what not to do with butterflies were also quite amusing.

I think the trip made the afternoon training more difficult, as it changed my frame of mind. However, instead of avoiding such trips in future to get rest, I personally would rather learn to handle both. This may take some time though...

Back in class, we covered the progression from form -> flow -> force in training. Self-choice was introduced, gradually increasing the range of attacks. We also covered feint attacks, and spontaneous modification of defence patterns to respond to these faints and also to incorrect choice of defence pattern in the first place.

Sifu also pointed out that we lacked the 'threat' level in our attacks. Introducing this immediately made the training much more focused, intense and real. Only the intention of avoiding hitting your training partner if they did not counter correctly prevented these attacks from being fully realistic (another benefit of the Wahnam training method).

We returned to the Lohan Asks The Way set and Sifu demonstrated the basic breathing for the set, so that with each strike we actually obtain and store energy, rather than just expending it. It will take a fair bit of practice to get used to it, though.

Sifu also pointed out that the set can be performed with different aims in mind to provide training 'multi-tool' - seemingly obvious, but I never thought of it like that before.

Finished by covering and practicing the first 3 combat sequences, also with self choice and with form, force and flow.

Sifu spent some time explaining that if there is a problem, e.g. with the form, then one needs to go back a step, or more in the progression chain until the problematic component is located. For example if form suffers in the sequence then drop the force and flow, if not enough go back to footwork. This important principles applies to all problems in the training. The structured training method makes it very easy to back-track a few steps, even within a particular sequence, to locate the problem and work on it specifically.

Right, that's it for tonight. Sifu Mark is eager to check his emails and he has a lot more internal force than I do. (Smile) 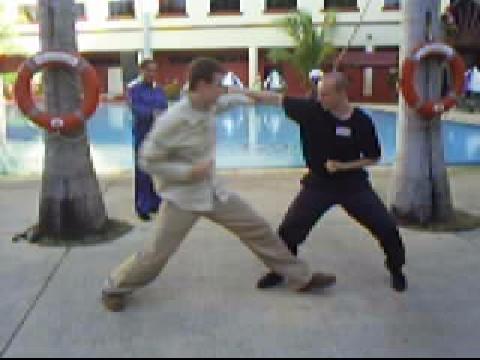