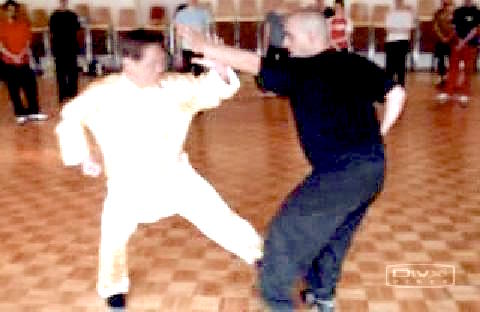 How the combat sequences were taught at the Switzerland Regional Shaolin Kungfu Course of August 2006?

The secret of the sparring methodology in our school, Shaolin Wahnam, lies in the 16 basic combat sequences, which are taught in the Intensive Shaolin Kungfu Course. But as the Switzerland Regional Shaolin Kungfu Course covered only three days of training, there was insufficient time to practice all the 12 sequences.

Hence, a simplified set of 8 combat sequences were derived from these 16 basic sequences to be taught at this regional course. These 8 combat sequences are complete by themselves, covering all the four categories of attacks and defence, namely striking, kicking, felling and gripping. In other words, without the need to borrow from any other martial arts but by using these 8 combat sequences, a practitioner can adequately defend himself from any forms of attack. Of course he must have the necessary combat skills.

As usual, the videos were recorded at random and are released here without editing. Unfortunately, we missed recording the first 2 sequences. The video series start with the third sequence. The first sequence (not shown here) deals with middle, top and bottom strikes, whereas the second sequence (also not shown here) deals with a side strike. These patterns in solo practice are shown in another video series here, and in picture series here.

When performing various patterns in a sequence, the movements must be fluid and not staccato. The various patterns are linked together smoothly and performed as if they were one long, continuous pattern. Should variations be made in a sequence, like when a sparring partner intentionally or mistakenly goes out of the pre-arranged order, they should be fluid and spontaneous too. Of course, at the beginning you may be hesitant and haphazard, but with this principle in mind you can attain fluidity and spontaneity with due practice.

Indeed, this is the reason why some kungfu sets are called “Long Fists” (“Zhang Quan” in Chinese). “Long” here refers to the “Long River”, the name the Chinese people call Yangtze Kiang, the longest river in China. The kungfu patterns are like waves in the Long River, flowing continuously and overwhelming the opponent irrespective of what moves he makes.

To help you remember the 8 simplified combat sequences easily, they are linked into a set called "Single Tiger Emerges from Cave". A video clip showing this set can be found here.

We would like to thank Sifu Andrew Barnett for recording the videos.
Please click on the images below to view the videos
You can view all the videos below here