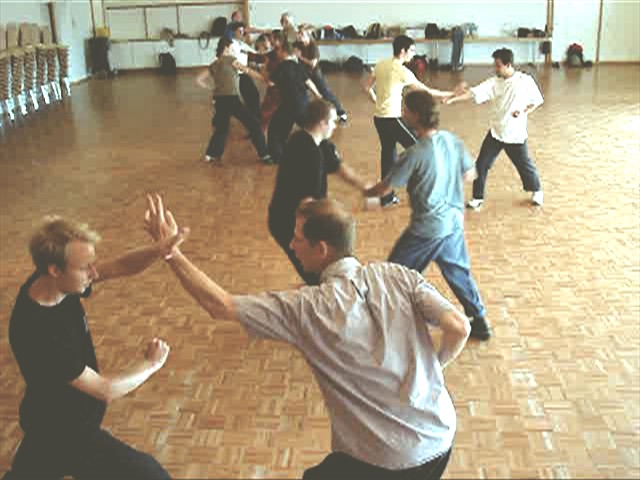 Would you believe that participants at the Switzerland Regional Shaolin Kungfu Course, including fresh beginners, learn to use and be able to apply typical kungfu patterns in free sparring in just three days?

Considering that most kungfu practitioners today cannot use their kungfu patterns to free spar, it is understandable that most people would find it hard to believe. Some may think that once again we in Shaolin Wahnam are making outlandish claims. But it is true, and the video clips below show how these participants, ranging from beginners to advanced practitioners, free sparred at the Switzerland Shaolin Kungfu Regional Kungfu Course taught by Grandmaster Wong in August 2006. Sifu Andrew Barnett translated the course from English into German.

The video clips are presented here for four main purposes:

The difference in skill levels among the course participants is obvious to the initiated, and it is heartening to note the more advanced helping the beginners. One can also notice the marked improvement of skills, especially amongst beginners, as the training progressed.

It is also significant to note that no one is injured in the sparring, that they all have fun, and are not tired or panting for breath after a few hours of training.

Similar regional courses were also held in Andorra and Finland in August and September 2006, and the participants could spar effectively too using typical kungfu skills and techniques after three days of training.

What secrets did the course participants, including beginners, use to learn free sparringc in just three days? You may find the answer here.

You may not be able to use kungfu techniques to spar after just three days, but the video clips may give you some indications how you may learn to spar using kungfu techniques after three months, or even three years.

You should also note that using kungfu to spar does not necessarily make you victorious in fighting. A more skillful opponent using another martial style may beat a kungfu exponent, but it gives you meaning and satisfaction that you could use what you practice for combat. It helps you to avoid injury in sparring, and if you learn from a good teacher, kungfu sparring contributes to your health and vitality as well as spiritual development.