SELECTION OF QUESTIONS AND ANSWERS
MAY 2015 PART 2 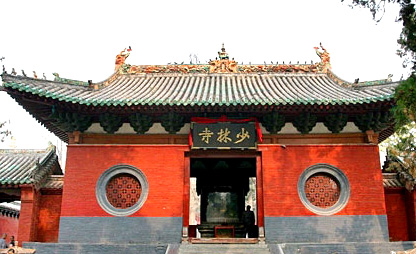 I have read your book, "The Art of Shaolin Kung Fu", numerous times, reading parts of it before attending a Shaolin wushu academy in China and rereading the whole book numerous times while I stayed there.

Many people have kindly commented that my book, "The Art of Shaolin Kung Ku", greatly inspired them in their practice. The book will show you, amongst other benefits, the philosophy and purpose of practicing Shaolin Kungfu, but you need to learn from competent teachers the skills of applying the techniques mentioned in the book to get desirable results.

Your observation is exact. The three suggestions I gave -- namely, not getting angry easily, using kungfu techniques in sparring, applying forms and not just performing them -- provide an excellent way to tell whether an instructor is teaching genuine Shaolin Kungfu. 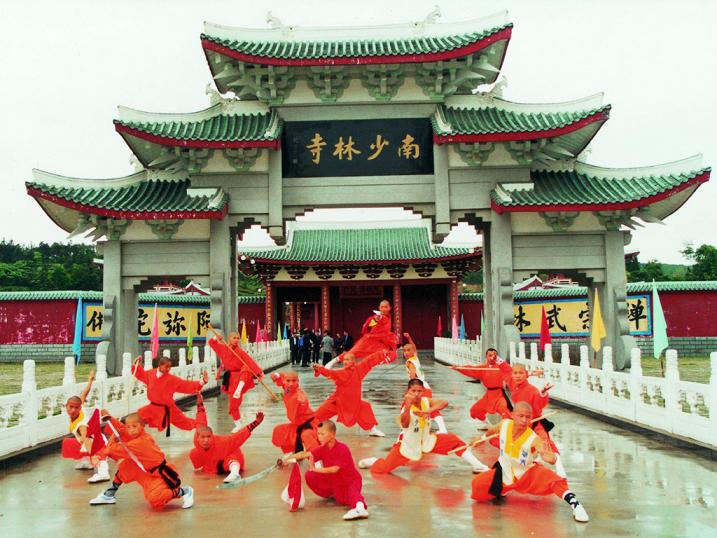 My first thoughts were whether they were really Shaolin monks?

Honestly, I don't like to state it publicly, but despite my dislike, when faced with a sincere seeker asking me for an answer, I choose to tell the truth. Many of the so-called Shaolin "monks" were accomplished wushu practitioners recruited by a clever German entrepreneur to act as Shaolin monks by shaving their hair and putting on a monk's robe to tour the West to demonstrate wushu as Shaolin Kungfu. Many of these "monks" remained in the West to teach wushu as Shaolin Kungfu.

The Qing emperor, Yong Cheng, who infiltrated into the Temple as a monk, ordered the burning of the Shaolin Temple at Quanzhou with the help of Lama experts from Tibet with their infamous flying guillotines.

Then I proceeded to learn fitness exercises and always asked when were we going to learn to use the moves we learned in forms?

Wushu practitioners pay much attention to fitness exercises similar to Western gymnastic exercises. This is quite different from traditional Shaolin training which pay attention to energy exercises based on chi or energy flow. 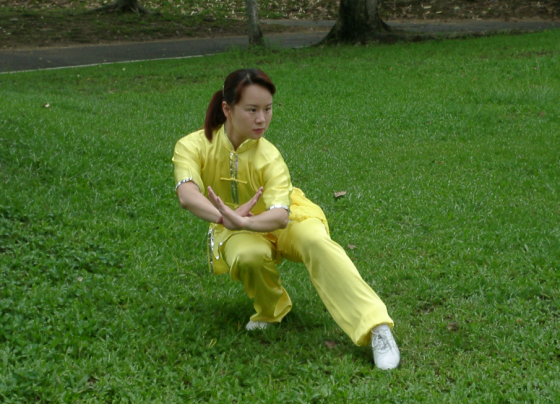 A wushu demonstration taken from http://wushuadventures.com/want-to-train-wushu-in-hong-kong/

Communication with my teacher there was next to impossible. With or without a translator, I could not discuss my training with him.

To tell you the truth, I feel very wronged that I spent a year in China and my teacher has probably never been taught how to kung fu spar himself, and therefore he could not teach me. I was naive and thought that if they are from the Shaolin Temple then they know Kung Fu comprehensively.

Lack of communication is actually a norm, even with genuine masters. Not only there is a language problem, they also believe in a doctrine of no questions. Students only practice what they are told to. We in Shaolin Wahnam is a rare exception.

While I was there, I made the most of it. Your book inspired me to train Ma Bu. When I arrived the students did three minutes of Ma Bu twice per week. I thought that was a joke. And you say in your book five minutes is the minimum. So drawing inspiration from your book when I did not get any from the teacher, I trained Ma Bu all year, and could hold it for 80 minutes at the end. I still train it

Mabu, or stance training, is the foundation of kungfu, expecially building internal force.

But it is not easy to practice stance training correctly. Many people practice it as an endurance exercise, which is a big mistake. Its secret, which I discovered after more than 30 years, is relaxation.

Remaining at a stance for 80 minutes, regardless of whether you have practiced it correctly or wrongly, is a remarkable achievement. Even if you had practiced wrongly, it is a testimony to your diligence and endurance. If you have practiced correctly, though not necessarily perfectly, you would have developed tremendous internal force. 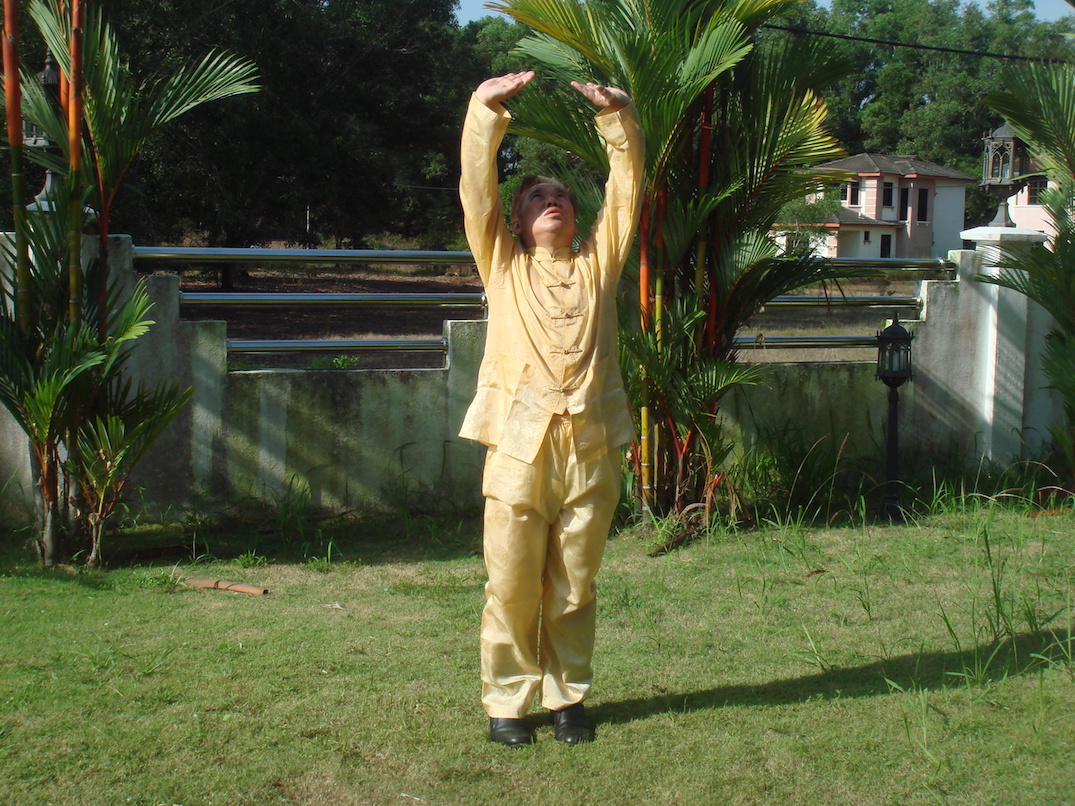 You book discussed the spiritual aspects of Shaolin Kung Fu; I was very attracted to that, but after spending time amongst these supposedly temple-trained monks, I got less spiritual. I felt more dull training with gloves. The students at the school grow more and more troublesome, angry, and stupid instead of less as your book suggested proper training should do.

It is worthwhile to note that "spiritual" is not the same as "religious". Shaolin Kungfu and any kungfu are spiritual, but not religious. Practitioners develop their spirit besides their physical body, i.e. they become peaceful, happy and mentally fresh besides being healthy and full of vitality. You are right: becoming troublesome, angry and dull are certainly becoming less spiritual.


Editorial Note: Namir's other questions will be continued at May 2015 Part 3 issue of the Question-Answer Series.

Recently I started practicing the pushing sky qigong exercise from your book and have gotten good results. Thank you very much for sharing these wonderful arts.

Although I practiced qigong for several years, the chi sensations were more localized in certain parts of my body. The pushing sky exercise produces soothing chi sensations that lasts throughout the day and is more spread out on the entire body.

I have applied for and will be attending your Intensive Chi Kung exercise in December to properly learn the skills.

Meanwhile, I do have a question and seek you advice:

Currently I am training for a fitness test, one of which requires me to run 2.4 km in a certain amount of time (13 minutes is the passing mark for my age group)

Although I had been able to pass the running test in past years, it had always been very straining. As i get older, it has become harder and always at the risk of injuries or becoming sick due to over-training.

I realize that this is not the way to train long-term, but am at a loss on how to approach it. When I try to run within comfortable limits, the timing is often not fast enough to pass the test. I wonder if you could advise on how to systematically train to run faster with endurance, without over-exerting myself?

Congratulations for having good results with "Lifting the Sky". I am glad you will attend the Intensive Chi Kung Course in December. Many people are amazed at the wonderful results of the course though it is only for a few days.

Applying chi kung for running or any activity without panting for breath and without feeling tired will be one of these benefits. But meanwhile you can try the following exercise.

Performing "Lifting the Sky" about 20 to 30 times. Then stand upright and be relaxed. If the chi starts to flow, relax and enjoy the flow. If there is no chi flow, it does not matter. After a short period (about 3 to 5 minutes) of enjoying your chi flow or standing still, start running, first slowly then quite fast. Do not tense your muscles in you running, but let your chi flow, which may or may not manifested outwardly, do the running for you. You don't have to know how your chi flow do the running, but just have a gentle thought that it does the running for you.

Do not worry about your breathing, just breathe normally. In case your breathing starts to become fast, breathe out gently and keep your breathing slow. In this way you will find that you can complete your fitness test quick easily.