FROM GUIDED SPARRING TO FREE SPARRING IN WAHNAM TAIJIQUAN 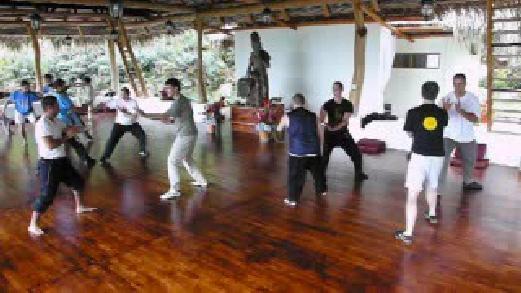 From Guided to Free Sparring
It was a great credit to the participants at the regional Taijiquan course on the Blue Mountain in Costa Rica in January 2007 that all of them could apply Taijiquan techniques and skills in free sparring after just five days of systematic training. While there were masters, like Sifu Jeffrey, Sifu Robin, Sifu Pitit and Sifu Jose Antonio, amongst the participants, some were fresh beginners, like Priya and Walter from Holland and Pablo from Venezuela.

How could the participants, especially the beginners, use Taijiquan patterns to free spar? It was through intensive and systematic training. Beginners had a five-day preliminary course of two hours per day on stances and footwork under Assistant Instructor Simon of Shaolin Wahnam Costa Rica. The Taijiquan course covered five days with four hours in the morning each day, and two hours in the evening for revision and correction.

The video clips below were taken on the last day of the training, and they show the participants using Taijiquan skills and techniques in sparring. The first part of the sparring is guided, i.e. participants were given guidelines on what to do, like starting with Sequence 5, followed with any one sequence, and adding a kick in the second sequence.

This method helped the participants overcome two major difficulties in combat, namely what patterns to use next in attack, and how to respond spontaneously. Control was gradually and systematically released until they eventually sparred freely. Sifu Joko Riyanto of Shaolin Wahnam Indonesia succinctly commented on the effectiveness of this methodology in our discussion forum when he said that students were guided to use kungfu skills and techniques in free sparring without their conscious knowing. Had they been told at the beginning to free spar, they would probably be bouncing about and punching and kicking wildly.

The progress from guided sparring to free sparring was so gradual that it was not easy to define at what point they started free sparring. Nevertheless, participants were free sparring spontaneously in the last few video clips. It was indeed a beautiful and inspiring sight to watch.

What was more inspiring was that not only no one was hurt or showed any anger at his sparring partners, all the participants had much fun, showed much tolerance and care towards one another, built up much comradeship, and were not tired or panting even after sparring for more than an hour.

From Guided Sparring to Free Sparring in Wahnam Taijiquan from Wong Kiew Kit on Vimeo.