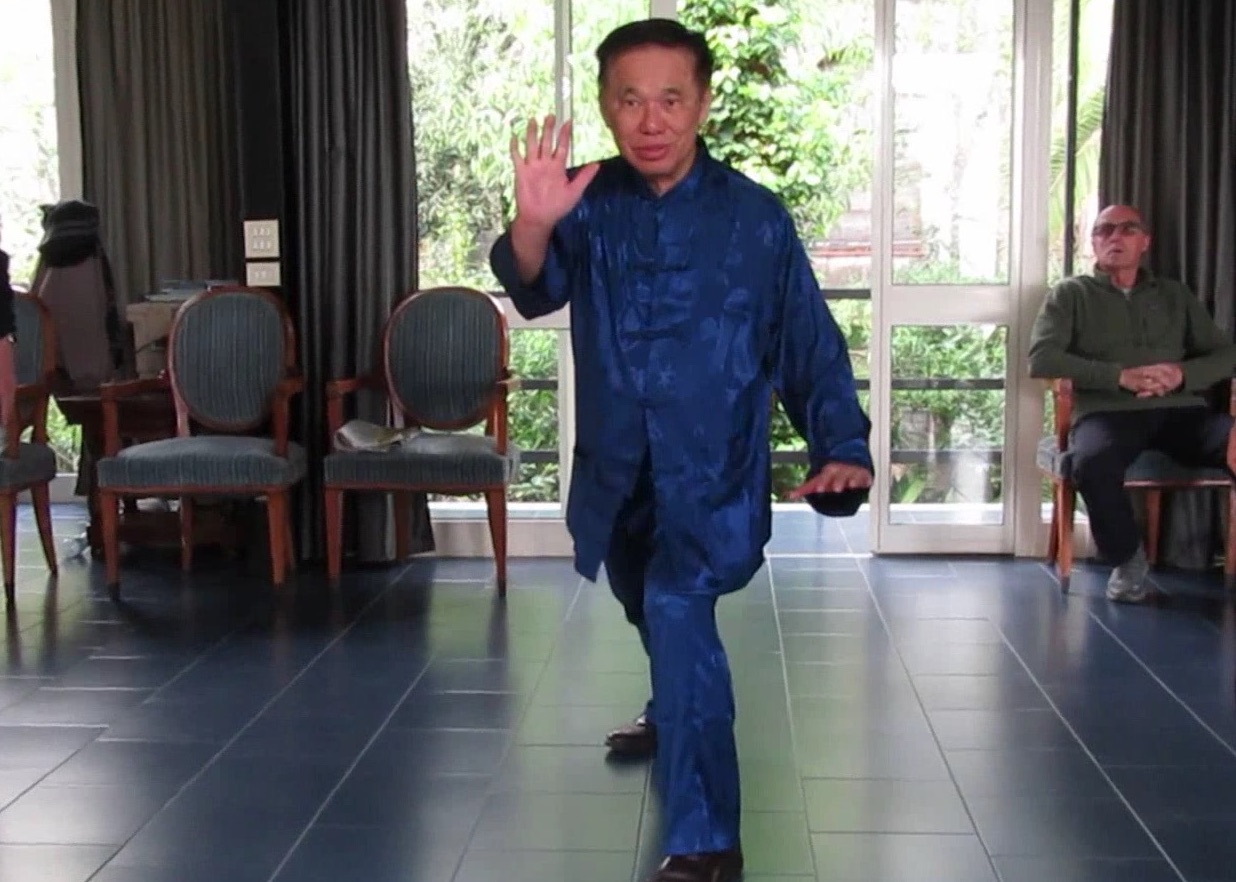 Yes, there is some difference. For this question we can leave aside other aspects of the difference, and focus on picture-perfect form.

When teaching chi kung, my main concern is to help students to generate an energy flow. It is the energy flow, not the techniques where picture-perfect form is important, that gives chi kung benefits like good health, vitality and longevity.

When students focus too much on attaining picture-perfect form, they tend to perform gentle physical exercise rather than chi kung, which is energy exercise. This is especially so in other schools. I need to clarify that what and how other schools practice is their right, but it is good that students in our school know this fact. Indeed, in other schools students perform the form of their chi kung techniques beautifully and in synchronization.

In our school one way to prevent or overcome over-training is to focus on form. When a student focuses on the form of the chi kung technique he is performing, he does not pay so much attention to energy and mind, hence the benefits he gets from his practice are less. On the other hand, if all other things were equal, by improving his form a practitioner would get more benefit.

Quantification can clear the confusion over this matter of form decreasing or increasing benefits. Any chi kung exercise has three components, namely form, energy and mind. Suppose a practitioner performs at level 5 for all the three components, i.e. 5 for form, 5 for energy and 5 for mind.

If all other things were equal, the practitioner does not lower his level for energy and mind to 4, but he raise his level of form to 6. He now performs his chi kung exercise at 6 for form, 5 for energy and 5 for mind. He will then have more benefits.

Here we are talking about genuine chi kung. Most other schools, however, perform gentle physical exercise and not chi kung although they use chi kung techniques. They do not generate energy flow and do not enter into a chi kung state of mind. Even if they raise the level of form to 10, the maximum, they only perform beautiful form using chi kung techniques, without any benefits of energy and mind.

Energy and mind are also important in kungfu, but it is form that makes kungfu an art of attack and defence. A kungfu practitioner can apply kungfu without energy and mind if he just knows only form. If someone punches or kicks him, he can defend himself. But if he has force and is calm and relaxed, his kungfu will be better. Developing force and being calm and relax are aspects of energy and mind.

Hence, when teaching Taijiquan and other styles of kungfu, I pay much attention to picture-perfect form.

However, just learning the form without learning skills for combat is not kungfu. At best it is just kungfu form. Unfortunately that is what more than 90% of kungfu practitioners all over the world are doing today. They can perform kungfu forms beautifully, but they cannot fight. Kungfu is meant for fighting, though good kungfu fighters may not want to fight.

When people practice Taijiquan today, often shortened to Taiji, they only practice form. They do not have the skills to use their kungfu form for combat or to develop internal force. If they practice other styles of kungfu, they also only practice form. When they have to spar, they borrow techniques from other martial systems and generously exchange blows.

How do we know we have over-trained?

Pain and tiredness are two very common symptoms of over-training.

Correct chi kung practice will make a practitioner pain-free and fresh, but instead he feels painful and tired. This usually occurs after a period of feeling very well; then pain and tiredness happen. He feels sleepy, nocuous and very discomfortable. 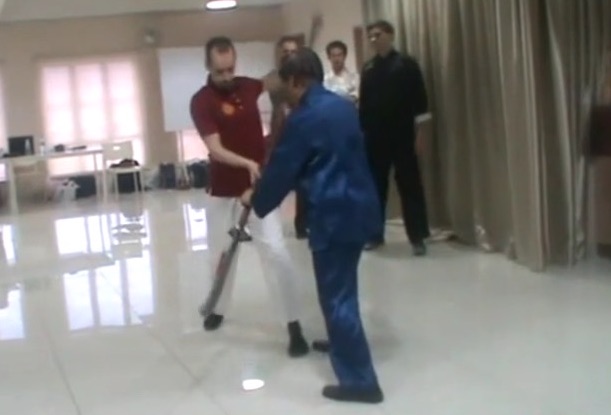 Capturing an opponent's weapon is taught in the "Practitioner" course

For those of us who wish to attend the course "Becoming A Shaolin Wahnam Kungfu Practitioner", how should we best prepare for it?

This will give you the skills and techniques to spar with other course participants. This preparation, while being the best, is optional. In other words, you need not be familiar with the basic combat sequences and practice Golden Bridge if you don't want to.

Editorial Note: The course on "Becoming a Shaolin Wahnam Kungfu Practitioner" was held in December 2018, but this question is only released now.

As for the multiple opponents training, are there any sets/routines that I should be learning or practicing beforehand?

You should be familiar with the three sets, which are Ho Family Flowing Water Staff, Shaolin Plum Flower Sabre and either Shaolin Traveling Dragon Sword or Wudang Sword. These sets are not compulsory, but being familiar with them will help you much when you learn their applications.

Learning the weapon sets from my videos will be a great help. It is better if you can learn from a living instructor.

There are no special sets for single unarmed against multiple unarmed and multiple armed. The applications are alive, i.e. depending on the existing conditions. Some general principles will be taught, and these principles are very useful.

One can attend the course without preparation. But being familiar with the relevant kungfu sets will be very helpful. 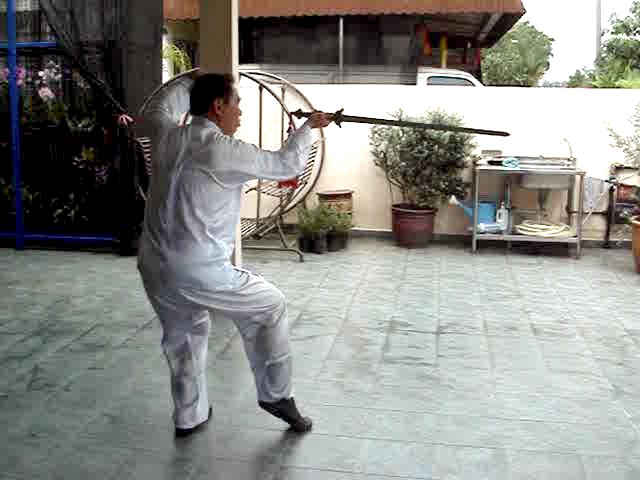 Yes, there is a difference. Choosing building exercises strengthens the person, like strengthening his courage, whereas choosing cleansing exercises clears blockage, like making him less fearful.

If an advanced Wahnam practitioner is very healthy but sometimes still afraid, what would be the difference in outcome if the said person focuses on exercises to increase his courage to overcome his fear?

If a person, irrespective of whether he is or is not a Shaolin Wahnam practitioner, is still afraid, he cannot be said to be healthy. A healthy person should not be afraid.

The difference in outcome is that when a person who is physical healthy but is sometimes emotionally afraid, focuses on increasing his courage, he becomes more courageous but he may still be afraid sometimes, bearing in mind that he may be courageous and afraid on different things. 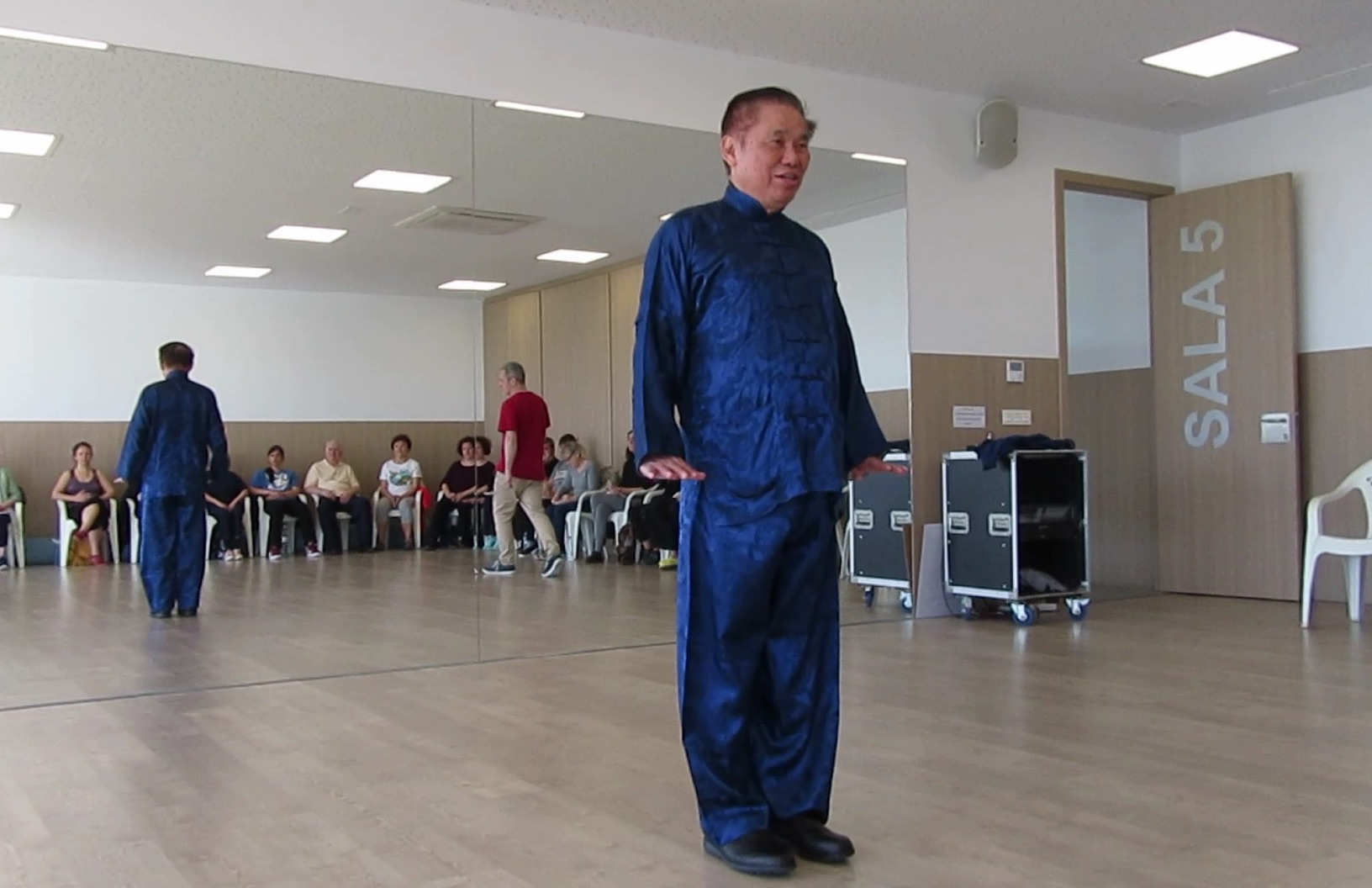 Does it make a difference if an advanced Wahnam practitioner wishes to get rid of some deep emotional blockage or a beginner wishing to do the same in choosing what to practice?

Yes, it makes a big difference between an advanced Shaolin Wahnam practitioner and a beginner performing their exercises.

His main concern, however, is that he does not over-train. If he over-trains, the harm may even be worse than performing the exercises wrongly.

An advanced Shaolin Wahnam practitioner has more techniques to choose from, and he has more skills. For example, if he wants to overcome fear, he may start with Nourishing Kidneys from the 18 Lohan Hands. When he finds that this exercise is insufficient to overcome his fear, he may attempts Bone Marrow Cleansing at the organ level, or at the bone-marrow level if he suspects that his fear was caused in a past live. A beginning student does not have this range of choices.

But he has to guard against over-training, even at a low level compared to an advanced practitioner. Compared to most other students, his level is high. Over-training can sometimes bring more harm than correct practice.

I imagine the beginner chooses exercises from 18 Jewels and 18 Lohan Hands and practises at a low level. But for the advanced practitioner, would it be more efficient to choose more advanced exercises mentioned above?

If all other things were equal, 18 Jewels and 18 Lohan Hands, as well as 5-Animal Play are low-level exercises in our school. They generate the least energy and are therefore suitable for beginners.

An advanced practitioner can choose more advanced exercises like Golden Dragon Taps on Ground and Bone Marrow Cleansing at the Muscle Level. But he has to guard against over-training.