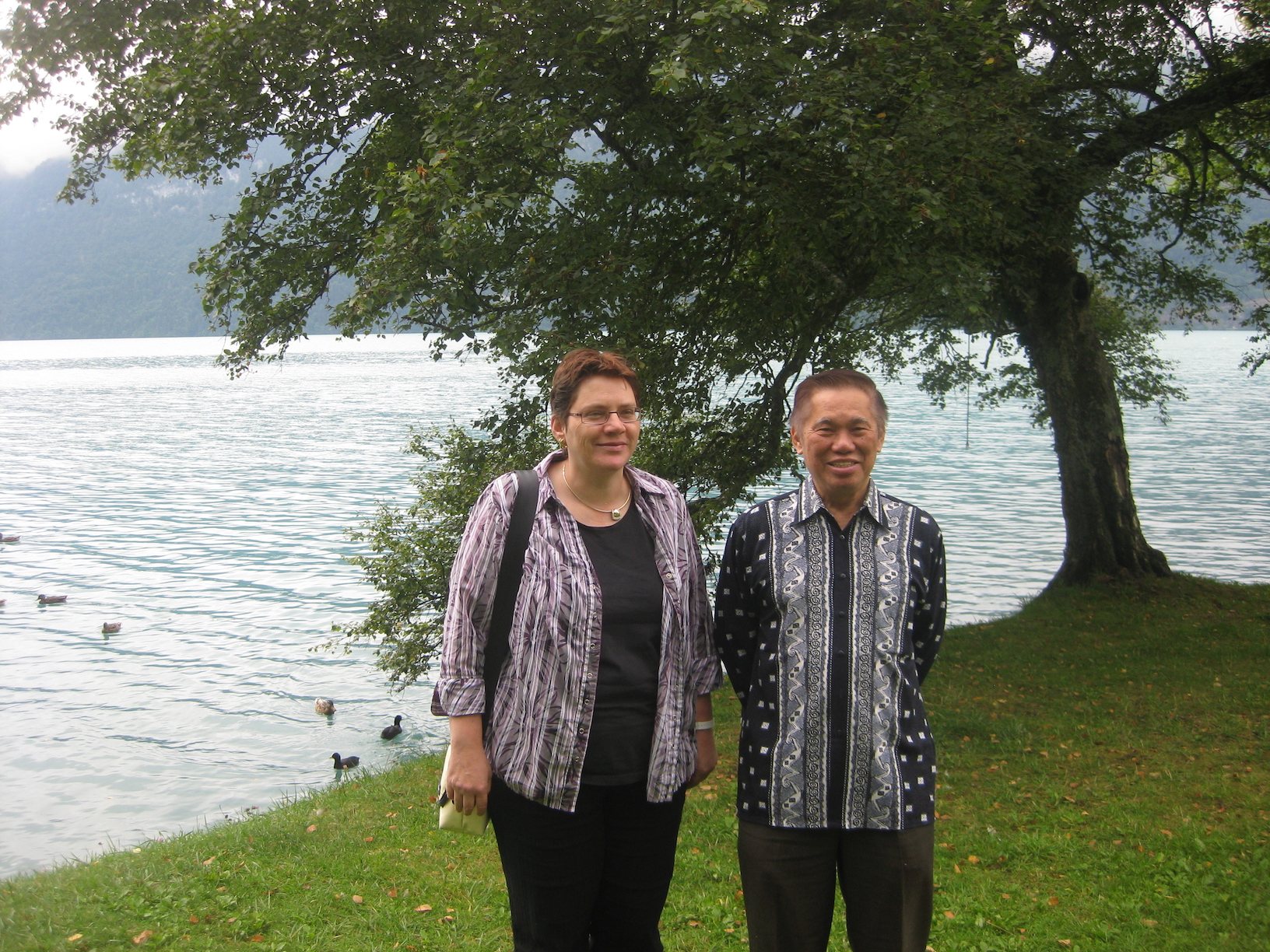 Being joyful is a characteristic of our Shaolin Wahnam training

Sifu, you explained that a person still felt pain at his back even when the blockage had been cleared because he still carried the memory of the pain. Is this the same as karmic memory?

Suppose in the present life a person hurt his back which resulted in a blockage. After practicing chi kung, the blockage is cleared, but he still remembers the pain. He may still feel the pain physically though the blockage which initially caused the pain is no longer there. He has a mental blockage.

A karmic blockage was due to a traumatic event in one of his past lives. Suppose in a past life he had a terrible fall and broke his spine. This terrible event caused an imprint in his consciousness. This was not a mental blockage nor a physical blockage, but a spiritual one. In this present life, there may not be any blockage at his back or any blockage in his mind. He may not be consciously aware of the event in his past life.

If this karmic or spiritual blockage is cleared, his pain will disappear. An excellent way to clear karmic blockage is to lead him back into his relevant past life, which must be performed by a master. Karmic blockage may also be cleared by Bone Marrow Cleansing.

Just now during Cosmic Breathing I noticed that I was not breathing in and out through my nose and mouth. Is this alright?

This is not only alright, it is excellent.

"Breathing" in Cosmic Breathing is not the same as everyday breathing through the nose and mouth. Many people, including some masters, may be unaware of this fact.

This explains why yogis can be buried underground and still remain alive. They do not need to breath through their nose and mouth, they get energy directly from the Cosmos. This also explains why our students can spar vigorously for a few hours and are not out of breath. Breathing in the ordinary sense becomes irrelevant because they exchange energy with the Cosmos.

How do I know that some masters may not be aware of the difference between breathing in the classic sense in the context of chi kung, and breathing in the modern sense? It is from what they say. For example, some masters say that Abdominal Breathing is the same as diaphragmic breathing, because in both cases the abdomen rises when one breathes in. 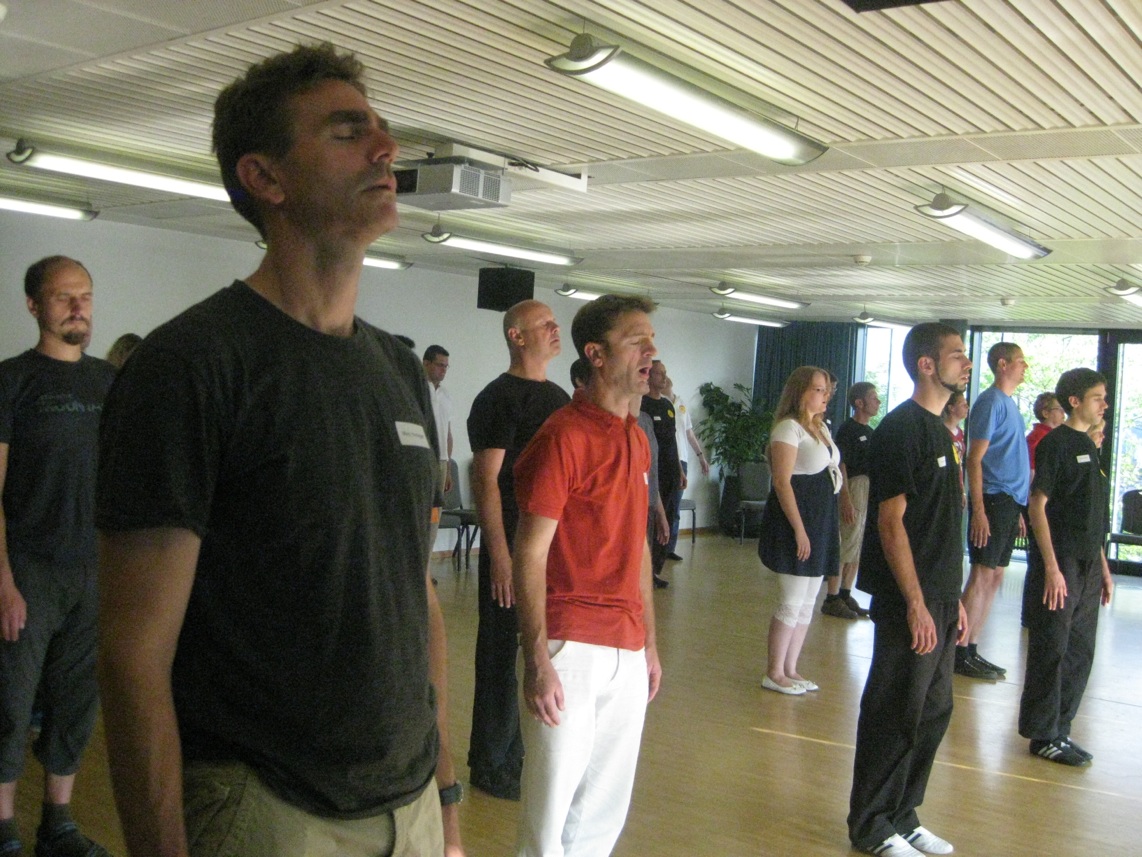 As the fee of the other chi kung course is quite cheap, and I really do not expect any extraordinary thing, I went to the course with a mindset "let me see what you got to let students clear Du meridian within such a short period". I expected chi transmission by an instructor. I informed them that I have chi kung experience and from Wahnam.

To my surprise, it is actually a meditation course. Students are asked to meditate by thinking at Dantian for 45 minutes per session and 3 sessions per day. Posture is sitting on a chair.


Editorial Note : Jason's other questions can be accessed at October 2014 Part 1 issue of the Question-Answer Series.

I am glad that you have mentioned that you have learned from Shaolin Wahnam. We are proud of our school, irrespective of what others may think or say.

Many people do not realize that meditation is very advanced. It is not just sitting in a lotus position or sitting upright on a chair. That is just the posture. Meditation is a training of mind or spirit.

My comment here is not directed at the school in question. It is a general comment. For beginners, meditating by thinking at the dan tian for 45 minutes per session may cause serious side effects. The mildest side effect is to become dull, instead of bright as meditation practice should result.

I was bored but as respecting the two old instructors I did it.

We were also told to control diet, sports activities and sexual activities which I didn't.

I am proud of you for respecting your instructors, especially when they are elderly. Respecting our teachers is the first of the Ten Shaolin Laws.

The teaching of this school, which is similar to that in most chi kung schools today, is in contrast with our school's teaching. To us practicing chi kung will enable practitioners to enjoy their food, have better results in sports, and have better performance and enjoyment in sexual activities. 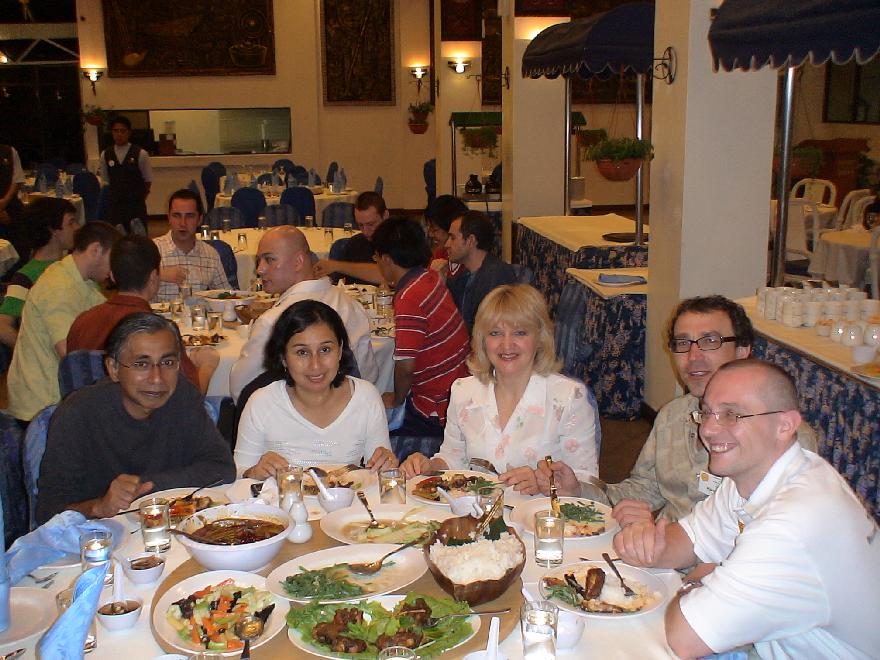 Enjoying food is a bonus of our chi kung practice

On the first day, I saw a flash of light for only a second. I was the first to have this, although I did not report it as I thought it was nothing impressive.

On the second day, I suddenly felt a pleasant feeling like floating in the air and it lasted for 5 minutes. I was the first to report such feeling, and the instructor said my du mai was cleared.

I was only attending the course just out of respect for the instructor, and I tried to sit still as best as I could, and enjoy the intermittent humorous talk by the instructor.

I am not sure whether your feeling of floating in the air was connected with the clearing of your du mai.

Having a sense of humour is a sure sign of good emotional health.

But on the fifth day, with eyes closed and dim light, I saw flashes of mild white light. The light then became stable and open wide, like somebody turned on bright light. I felt warmth in my forehead. But the most impressive thing was I felt a sense of disappearing, or felt like being lifted, just like the second day.

It was comfortable and it was extremely joyful. The joyfulness lasted even after the practice session. In the subsequent session, I saw flashes of mild white light again. This time, it flashed brightly like sunlight that I was a bit shocked. Again it was very joyful.

I was the first, and by the end of course the only one, to report this, and the instructor said this was "empty chamber creates light", which was a good achievement.

As this was new to me, I felt great, but what really impressed me was the happiness or joy, or even to use the word bliss. The instructor seemed strange that I told him I was very happy.

These are interesting symptoms that you are progressing. Many people cling onto these symptoms, considering them as signs of advanced practice.

But you should not cling onto these sensations, though they are pleasant. Enjoy them as they occur, but don't worry or intellectualize on them. It is more important and meaningful to have practical benefits like being free from pain and illness, and having much vitality.

This does not mean that your seeing light is not a good sign. It is. It opens some psychic points and spreads to open your heart making you feel happy 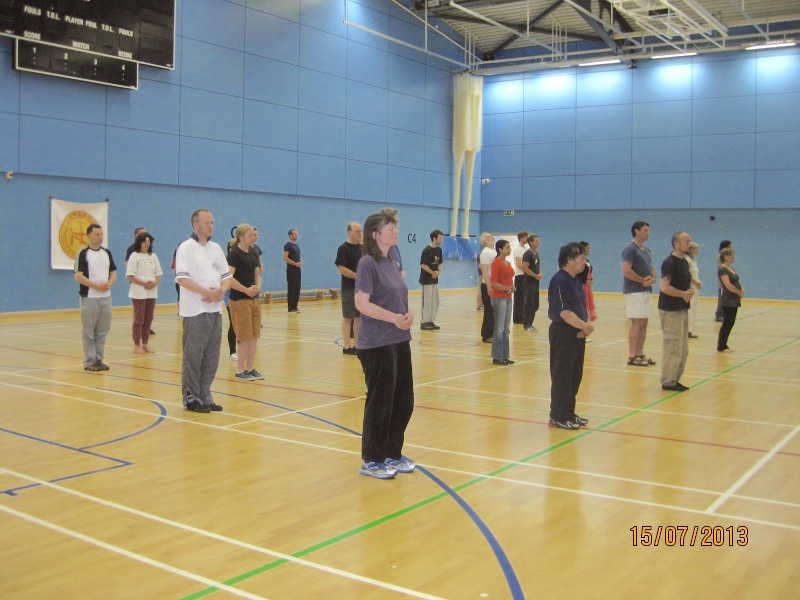 I was told to not putting attention to the light. I asked more about the light and I couldn't get any clear-cut answers, like the way you normally told Wahnam students on what it was, like was it really good or harmful, depleting or enriching, how to handle it.

Sometimes, I felt heaviness and dizziness. I was told to think of the dan tian to solve this problem but I couldn't. Later I found that touching the tongue a bit inner to the upper jaw solved this problem.

What we do in our courses is actually not the norm in most other schools. Many instructors, despite having taught for many years, may not understand the philosophy behind their practice, and hence may be unable to answer students' questions adequately.

The light you saw was energy. The energy was there in all people's head but they could not see it because their psychic points were not opened. Moreover, the amount of energy in them is less than that in you.

The experience was good. It indicated progress. But intellectualizing on it, especially when answers were not available, would be harmful because it would make a practitioner stressful and dull.

The experience was enriching, but clinging onto it or intellectualizing on it would be depleting.

A good way to handle the experience is to enjoy it and then let it go.

The heaviness and dizziness could be due to more karmic blockage being cleared.

During experience sharing at the end of the course, some students said they experiencd cleansing or pain, some didn't feel any chi, some said chi was blocked at the back, some saw flashes of light but obviously not quite impressed by them, some said pleasant feeling like floating in the air. There were reports that in other sessions students cured themselves of "incurable disease".

I said I found bliss, and had a whole new experience of chi kung, and also commented that this technique although simple was actually best to be appreciated by intermediate and advanced practitioner.

But I found that they didn't quite understand what I said. Nevertheless, I expressed gratitude to the two husband and wife instructors with their sincere teaching and humorous talk though some of the teaching was not in line with our school.

Different students had different experiences although they practiced the same exercise because of their different constitution and needs. It is beneficial to share experiences.

Not many people understand our experiences or our explanation. Some of them even think we are lying or boasting. For them our benefits are too good o be true.

They are actually insulting, though they may not realize it. They imply that we are not good enough to have such good results. But we do not want to waste our time on them. Whether they believe or not is their business.

We are only concerned that their criticism, without bothering to find out whether our claims are true despite that we have so many testimonials verifying our claims, affects those who could benefit from our teaching or healing. Many people suffer from so-called incurable diseases. They have a good chance of overcoming these diseases and relieving themselves of the suffering if they seek our help.

Again it is up to them who need our help to seek us. We don't want to waste our time to persuade them. It is their life, or their suffering.

Some people may question whether we are unkind. For some odd reasons they seem to think that a true master must cure those who are sick, or teach those who want to learn, preferably for free as well as housing and feeding the patients and students. This is not true.

Indeed we are already very kind and generous. We teach secrets that many masters will keep only for their inner-chamber disciples.