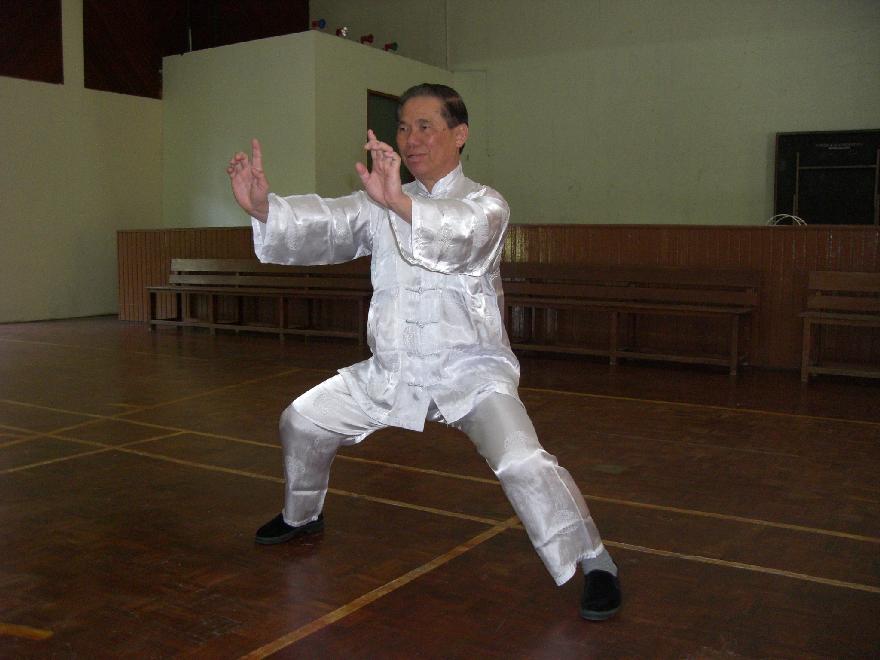 Thank you for recommending the internal force training program. After 3 months of Horse Riding Stance I have been training Golden Bridge once a day for about 6 months now. After the Intensive courses I am going to switch to One Finger Shooting Zen which I haven't learnt formally and therefore did not practice yet.

I can feel that my internal force has increased tremendously. I started to feel my Dantian regularly during and after the practice, which was hardly the case in the years before.

Sometimes I can feel some kind of gentle wind around my arms and upper body.

This is a good sign. It shows that internal force is building up in your dan tian. Congratulations.

Feeling of gentle wind is a sign of you expanding energy. It is both pleasant and beneficial. 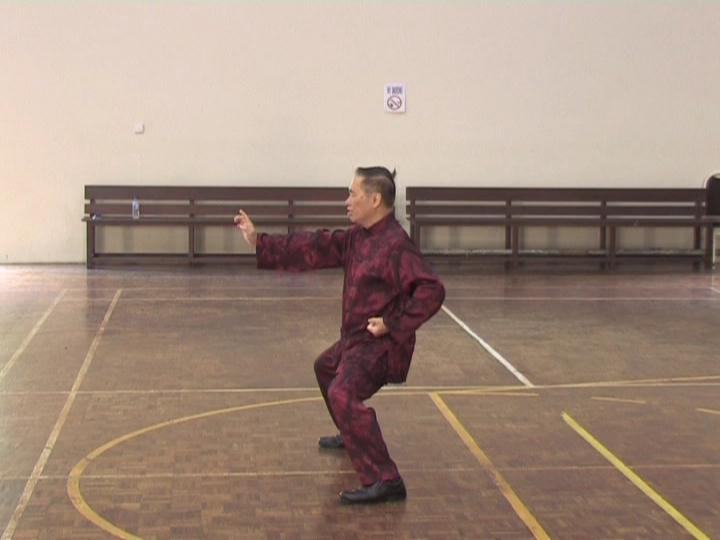 As soon as I get into the position of Golden Bridge my arms start to rotate similar to Cloud Hands. Sometimes in small circles, sometimes in big ones. As I enjoy this flow, I let go and let it happen, but after some minutes my shoulders start to tense due to the vigorous movement and shaking. Should I focus my chi at my dan tian so that my arms do not start to move so heavily or can I keep on letting go?

This is another very good sign, indicating you are progressing to an advanced level. Not may people, including masters, have reached this level.

Your shoulders start to tense because you tense them, probably subconsciously. If you relax, the circulating movement can go on for quite a long time, and can be very fast and powerful.

When you wish to stop the circulating movement, you can think of your dan tian.

You asked me to remind you that you would like to show me how to develop internal force using the techniques of my Hokkian style. I developed a combat sequence based on your first Abridged Combat Sequence using our basic techniques. I would be grateful if you found a few minutes to correct and comment.

It will be a pleasure to help you develop internal force using your Hokkien style techniques as well as to see your composition.

I am glad that your effort will surely contribute to the blossoming of your style. Yours is a great style. We all want to see it prosper.


Editorial Note : Sifu Leo's questions will be continued at February 2013 Part 2 issue of the Question-answer Series. 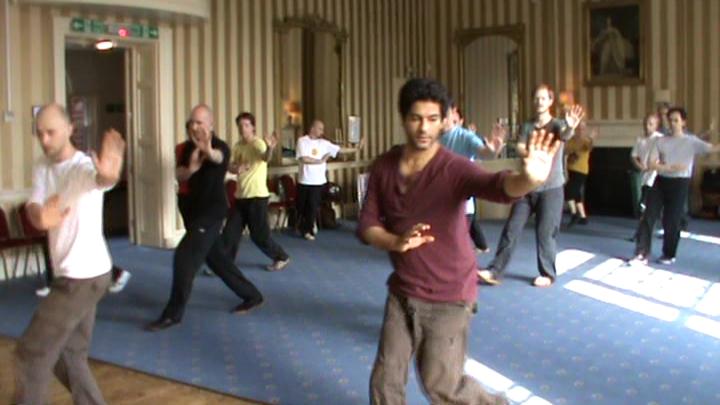 Thank you again so very much for teaching Baguazhang at the UK Summer Camp (2012). I have been enjoying my training immensely. Though I live quite a distance from Sifu and other members of Shaolin Wahnam, I truly feel my practice is bearing wonderful fruits in both my daily life and my kung fu practice. The fact that a relative beginner like me can use kung fu for spiritual cultivation is truly humbling.

I am glad that your Baguazhang training not only enhances your kungfu performance but more importantly it enhances your daily life.

Could you perhaps explain the differences and similarities in the nature and character of force training arts such as Lifting Sun and Moon, Golden Bridge, Three Circle Stance, Lifting Water, Two Finger Shooting Zen, and Baguazhang Eight Mother Palms Stance-and-Walk?

Holistically, all the exercises you have mentioned develop internal force and mental clarity.

Thematically, there may be some differences as follows.

Lifting Sun and Moon sets energy flowing up and down the body or in a small universal flow.

Golden Bridge develops a lot of internal force, especially at the arms.

Relatively the force developed in Three Circle Stance is less powerful than in Golden Bridge, but is more flowing.

Lifting Water generate energy flow to the arms, and them spreads all over the body.

Two Finger Shooting Zen focuses energy at the two fingers, but particularly at the middle finger, and is frequently used for Dim Mark.

Baguazhang Eight Mother Palms stance-and-walk is an excellent combination of building and circulating energy, resulting in a practitioner being both powerful and agile. 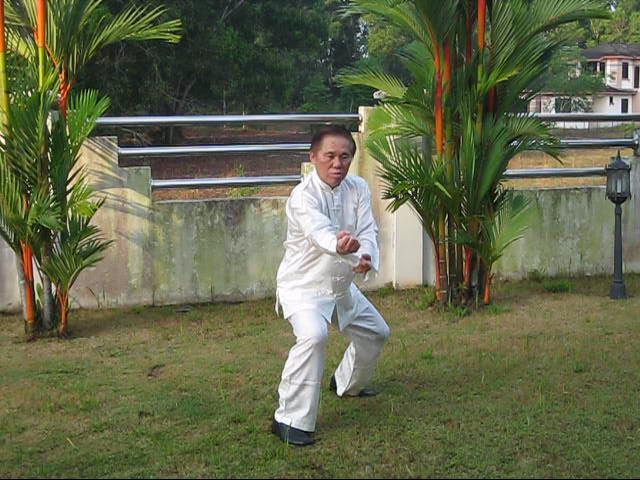 Wuzuquan is a complement of Baguazhang

I usually feel most stable and solid when practicing Golden Bridge (and I feel it is the most physically demanding of the force exercises I know) and I feel the most powerful overall from practicing the Baguazhang Stance-and-Walk technique from the Summer Camp.

Regardless of the art I practice, I always feel wonderful, happy, and powerful, which is probably far more important than intellectually knowing the fine differences between the arts.

You are right. Feeling wonderful, happy, and powerful is certainly far more important than intellectually knowing the fine differences between the arts.

Enjoying the benefits of spread and depth even in otherwise opposite arts like Taijiquan and Triple Stretch is very special for us in Shaolin Wahnam. I believe it is unprecedented in the whole history of kungfu, though kungfu super-greats like Zhang San Feng and Ng Mui had these benefits as individuals but no schools as an institution had these before.

After learning Baguazhang from you at the UK Summer Camp, I also became more curious about other sets and styles. Many members of the Discussion Forum have remarked on the complementary nature (because of the emphasis on chi flow and fundamental skills in Shaolin Wahnam) of many seemingly "opposite" sets and styles such as the "softer" Wudang Taijiquan and the "harder" Triple Stretch Set.

Your results in practicing Golden Bridge and Baguazahg stance training and walking correspond exactly to what these exercises are meant to produce. Congratulations

Xingyiquan is at present not in our syllabus, but due to popular request I shall teach it at the UK Summer Camp next year (2013).

Apart from Xingyquan, another art that is an excellent complementary to Baguazhang is Wuzuquan. Wuzuquan is normally hard and solid, but the Wuzuquan that I learned from Sifu Chee Kim Thong, regarded as a living treasure of China in his lifetime, is soft. I shall teach Wuzuquan as a special course in Penang in December (2012).

From another perspective, the Shaolin Flowing Water Staff is also an excellent weapon set that complements Baguazhang. But the reasons for their complementary nature are different. The Wudang Sword is soft and flowing like Baguazhang, whereas the Shaolin staff is hard and direct which is the opposite of Baguazhang.