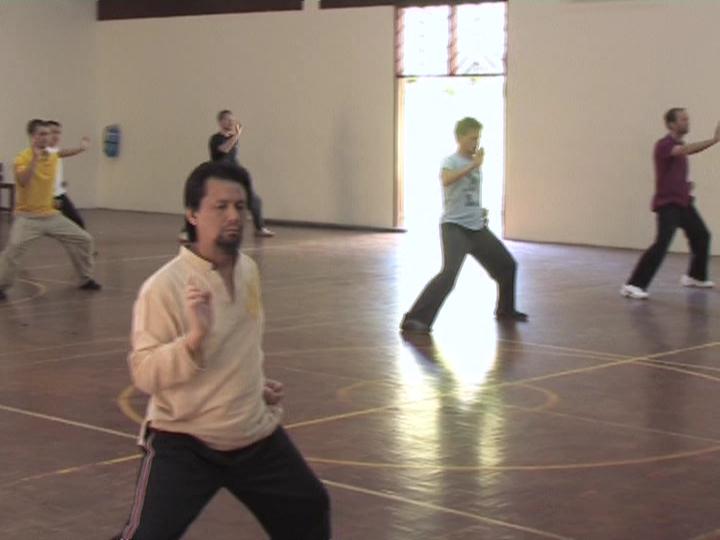 I have gotten wonderful results with One Finger Shooting Zen in many areas: force, focus, relaxation while sparring, improved flow in my personal life, etc. These results have been dramatically accelerated after the amazing course you taught in November, as well as after the Wing Choon Course.

I have been practicing it every day and this coming January is the 3-year mark of my daily One Finger Shooting Zen practice. As I approach this milestone, it brings to mind the kung fu saying "Three years, small success, ten years, big success." It is exciting to be close to the base level of training that would traditionally be considered a small success (albeit it with far less total time spent practicing).

As your sifu has rightly said, One-Finger Shooting Zen is a treasure of Shaolin Wahnam. I clearly remember that when I first learned from my sifu, Sifu Ho Fatt Nam, he said to me, "One-Finger Zen and Tiger-Claw are two of the most profound arts in Shaolin. Both are found in One-Finger Shooting Zen., which we teach right at the start so that students have time to practice it. Practice it everyday."

I have benefited tremendously from my daily practice of One-Finger Shooting Zen too. The first time I was amazed at the internal force derived from its daily practice was when I could break a brick. Prior to that I had trained Iron Palm for about two years, but still could not break a brick. Then, after training One-Finger Shooting Zen for a few months, I tried breaking a brick for fun. To my surprise, it broke. I tried again and again, and the bricks broke.

Another occasion that confirmed for me the tremendous force of One-Finger Shooting Zen was an encounter with another Shaolin master, though surprisingly I did not look at it with amazement. I regarded it as an ordinary matter.

That master was belittling Taijiquan, saying that in Shaolin Kungfu we trained hard but one merely moved about gently in Taijiquan. To impress me he hit his arms against a pillar supporting a porch beneath which we were talking. The porch literally shook. But I was not impressed, and he was visibly annoyed.

He asked me to do three-star knocking arms with him. He swung his arm real hard against my arm, probably wanting to break mine. But little did he know that the harder he swung his arm against mine, the harder my arm would bounce his arm back. Exactly after two hits, he walked away.

But the real wonderful benefits my daily training of One-Finger Shooting Zen has give me are good health and vitality, and as I am almost seventy now, I can rightly say longevity. I have employed the internal force derived from One-Finger Shooting Zen practice to help many people relieve pain and overcome illness as well as to save lives.

One of my long term goals is to train the art of One Finger Zen to a very high level and eventually be able to dot vital points from a distance. I am aware that other training methods exist in addition to One Finger Shooting Zen for training this skill, but I do not know much about them.

Dotting vital points from a distance is the signature art of One-Finger Zen, and One-Finger Shooting Zen is the training method. There are, of course, hidden secrets in the method.

It is not appropriate to write down the secrets. But even if the secrets are written down, and people know about them, they will still be unable to apply the secrets successfully. The secrets need to be transmitted from heart to heart. When the opportunity arises, remind me of the secrets and I shall transmit them to you. 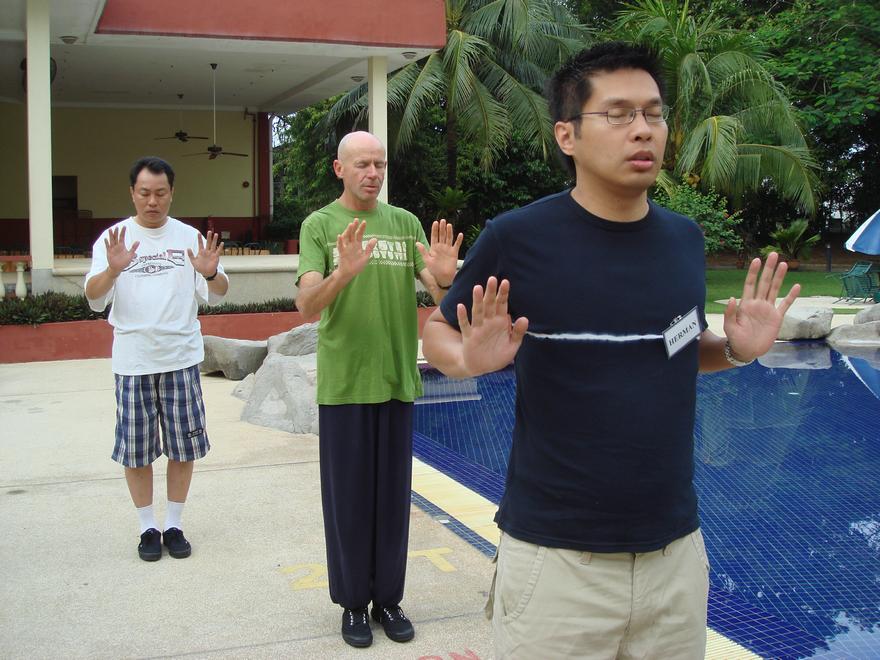 Sifu has mentioned putting out candles, which he is currently practicing. I saw videos of it from the healing course, and I casually have done this for fun once in awhile but have not focused on it.

This is an important supplementary method. Later you could put out candles behind a paper shield or a glass pane. Many years ago I gave an impromptu private demonstration of this art in Lisbon, not with candles but with live people.

I lined up seven people and from a distance shot chi through them to hit the sixth person, throwing him many feet away. I think it was your sisook, Luis. He described the experience like a sharp knife thrust into his heart. Your sipak, Riccardo Salvatore, probably remembers this demonstration more clearly.

I also read in a book about a method of pushing a hanging hammer with one finger and gradually increasing the size of the hammer, then later pushing the hammer without touching it. After a search of the Q&A, I believe you call this "One Finger Gold."

In my early years before I started travelling overseas to teach, some inner-chamber disciples came to my house in Sungai Petani for training. I taught your sipaks, Goh Kok Hin Golden Bell, Wong Yin Tat Iron Short, and Ong Kong Beng One-Finger Gold.

Goh Kok Hin and Wong Yin Tat succeeded in their training of Golden Bell and Iron Shirt, but for some personal reasons Ong Kong Beng did not continue the training. Thus we did not have a chance to test the effect of One-Finger Gold, like poking an index finger through some buffalo hide. 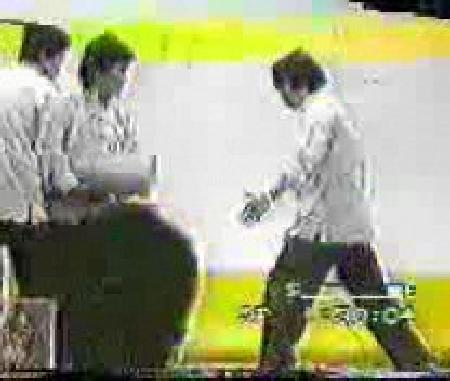 Sifu also mentioned something about striking a gong from a distance with One Finger Zen. Would you be willing to comment on the benefits, procedure, or skills acquired from these or other methods for developing the art of One Finger Zen?

Sounding a gong or a bell from a distance is one of the tests of One-Finger Zen as well as Strike-Across-Space Palm. The benefits are not just for combat but also for health, vitality, longevity and healing. Basically the training is of energy and mind, though some specific techniques are used.

I have also noticed that most of the advanced kung fu skills have basic training to build the underlying force followed by more specialized training. Cosmos Palm starts with Pushing Mountains, Marvellous Fist starts with 30 Punches, and One Finger Zen starts with One Finger Shooting Zen.

This brought up a question that Sifu said I should direct to you regarding the concept of Small Success and Large Success as it relates to specialized arts. Traditionally, would the Large Success in various arts come simply from continuing to deepen and lengthen the basic training, or would it include additional methods? In our modern era, do the same definitions hold true?

Traditionally as well as in our modern era Large Success and even Small Success require specific techniques as well as "sam fatt" or "pei khuit". "Sam fatt" ("xin fa" in Mandarin) literally means "heart-method", and "pei khuit" ("bi jue") literally means "secret formula". Though there is some difference between them, both may be conveniently translated as "secrets". These secrets are usually not taught or explained, but transmitted from heart to heart. The uninitiated would find this hard to believe or even to understand.

There are a lot of examples in our schools, although those involved may not be aware of it. Many of our instructors and some of our advanced students already have the basic force for many of these specialized arts, but because they lack the "secrets" they may not be able to manifest the feats generally associated with these arts.

This lacking of transmission of secrets is not because I want to keep the secrets, but because nowadays I pay little importance to these feats as I pay more importance to real benefits like good health, vitality, longevity, cost-efficiency and happiness that the occasions for such transmissions seldom occur.

In one of the earliest Intensive Shaolin Kungfu courses at Cinta Sayang in Sungai Petani, we found some bricks left over from renovation as we arrived at our training ground. I told the course participants to break some bricks for fun. None of the participants, I believe, did any hard-conditioning or brick-breaking training before, but I knew they had sufficient force derived from our fundamental training like One-Finger Shooting Zen and zhan zhuang.

Initially they couldn't break any bricks! Then I transmitted the "secret" to them, and demonstrated how to break a brick. Actually it was more than 20 years since the last time I broke one. After this transmission and demonstration, they could break the bricks easily. Your sipak, Ronan, even broke a lower brick without breaking the one on top. He did not have any prior training. I just transmitted the "secret" to him.

Sometimes the heart to heart transmission may not even be face to face. In the first Chi Kung Healing course we also broke many bricks for fun, including breaking the bottom bricks. Your sisook, Piti, was very powerful. He could break bricks easily, but at first he could not break the bottom brick.

Sifu, we would like to tap your expertise about a troubling situation. Despite good chi kung practice, a few students still suffer from fibroids. We are concerned because for some reason chi kung is not having a positive effect on them. I don't know what is missing but this is an obstacle and I am hoping that you may be able to explain a change that can help them all.

In practice I am quite at loss at why chi kung could not overcome fibroids.

I would fall back on theory for an explanation. According to chi kung philosophy, there is no such a thing as an incurable disease. At the most basic level, all illness is caused by energy blockage. Hence if a patient can clear the blockage, he (or she) can restore good health.

In other words, if he is still sick, it means he has failed to clear the energy blockage.

Here are a few possible reasons why one may not clear his energy blockage despite practicing chi kung:

As all those you have mentioned have practiced high-level chi kung correctly, it leases only the third and the fourth reason possible. Personally I believe the fourth reason is more likely, and a probable cause is excessive worry.

Applying the interplay of the Five Elemental Processes, worry can be overcome by fear. If a skilful healer can make a worried patient to be very afraid, the patient may overcome his worry.

Of hand, I can think of a recent example. An elderly lady broke her leg, but the fracture was excellently treated by Western surgeons. However, the doctors and nurses were too kind to her. They pampered her and asked her not to move at all. In time she just stayed in bed, and was worried that if she moved she might fall again.

In came a slave-driver, i.e me. Subtly I instilled fear in her that if she did not move she would be confined to her bed for life, which was true. Instantly she sat up. I taught her how to walk. I helped her by opening her relevant energy points, and channel some chi into her legs. Within a week she was back to normal life.