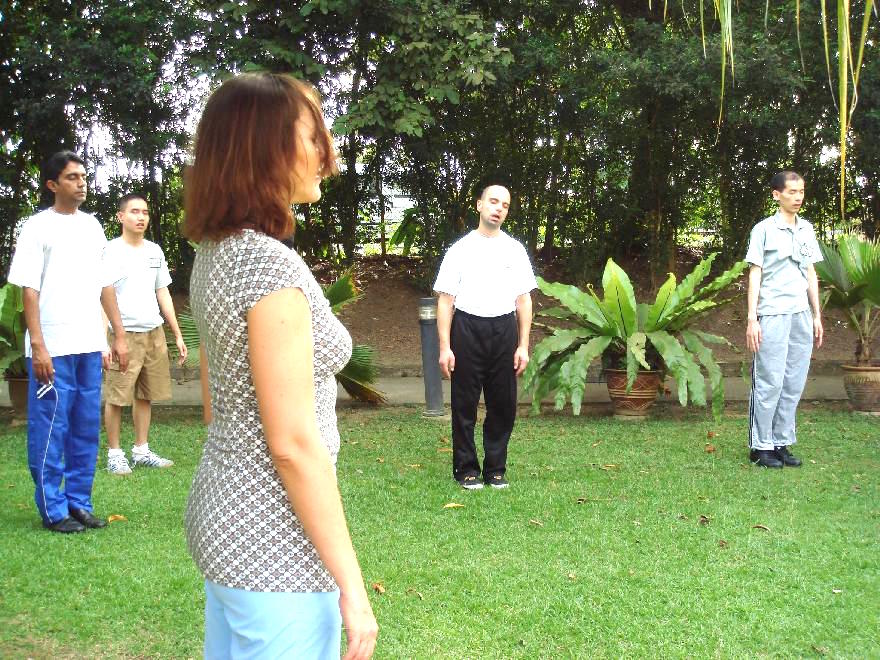 "Entering a chi kung state of mind" is a modern term. The classical term is "ru jing" which means "entering silence", or entering a higher state of consciousness.

To those who think that Bruce Lee's training was just physical, I have some interesting quotes from Sifu Lee. "To perform the right technique in gung fu, physical loosening must be continued in a mental and spiritual loosening, so as to make the mind not only agile but free. In order to accomplish this, a gung fu man has to remain quiet and calm and to master the principle of no-mindedness (wu hsin).

"No-mindedness is not a blank mind that excludes all emotions; nor is it simply calmness and quietness of the mind. Although quietude and calmness are important, it is the 'non-graspiness' of the mind that mainly constitutes the principle of no-mindedness. A gung fu man employs his mind as a mirror - it grasps nothing and it refuses nothing; it receives but does not keep."

Thank you for the interesting information about Bruce Lee's training philosophy.

But this philosophy does not indicate that his training was not physical. To put his training philosophy into just a few words, what Bruce lee said was to be relaxed and not intellectualize when performing kungfu techniques.

While this mental state is essential for internal art training, it is also employed by external martial artists and other external athletes and performers if they want good results. A karate exponent, a weight-lifter, a violinist, for example, would not let his mind grasp at any thoughts when he produces good results in his performance.

Sifu Wong, if I understand you correctly, in order to perform chi-kung properly one ought to have a "chi-kung frame of mind". Is this the same as wu hsin?

A chi kung state of mind may or may not be wu-xin (wu hsin).

A "chi kung state of mind" is a modern term. In classical times it was called "entering Zen", "entering Tao" or "entering Silence". The Western equivalent term is a "heightened level of consciousness".

At still higher levels a chi kung state of mind may lead to a satori or spiritual awakening where reality is perceived and experienced transcendentally. For example, a practitioner at this very high level of a chi kung state of mind or spiritual awakening may find that he does not have a physical body or he may find himself far above observing his body and his classmates practicing below. I would like to say that these are not just empty words. Some of our students have had such experiences.

Wu-xin literally means "no heart", but actually means "no-mind". It refers to a mental state where thoughts do not arise.

Wu-xin can be at various levels too. At the basic level the practitioner's mind is clear and relaxed. At higher levels the practitioner experiences transcendental reality. He may be able to see across time and space. He may, for example, see what happened in the past or what will happen in future, or he may see what is happening at some distant places. At the highest level he merges with the Great Void, known as attaining Enlightenment in Buddhism or returning to God the Holy Spirit in Western terms. 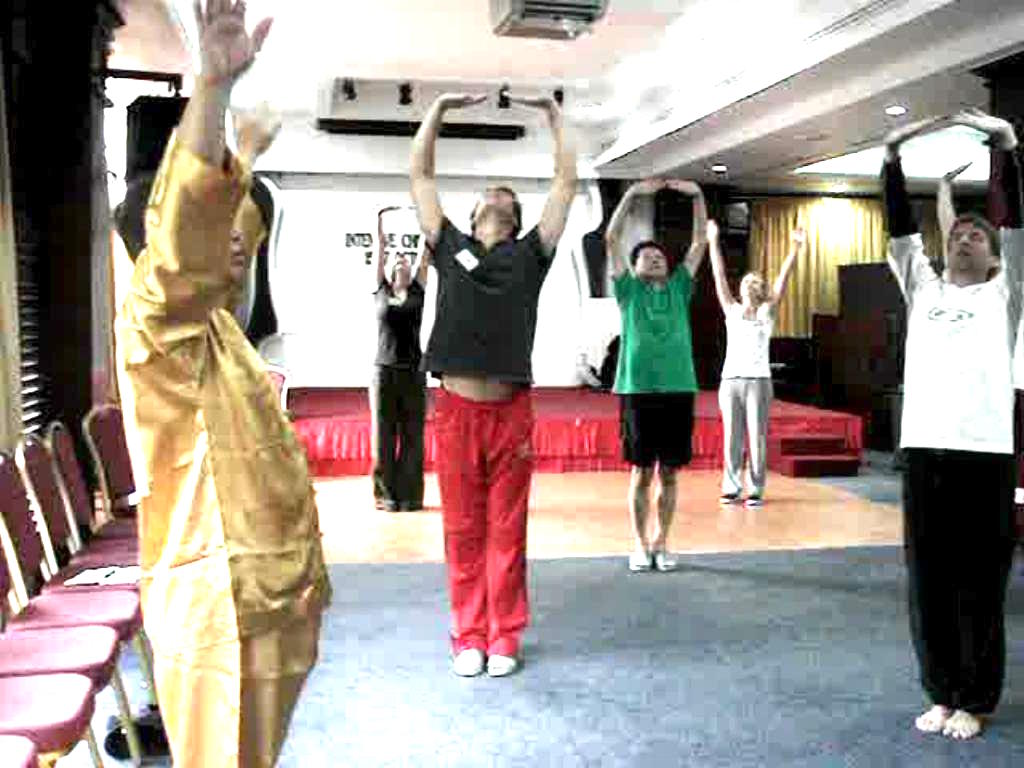 "Lifting the Sky" can bring many benefits

After reading your question-answer section, I have completely abandoned practicing Small Universe Circulation. I now understand how stupid it is to think that one could learn advanced chi-kung from a book. I now only practice "Lifting the Sky" (with far better results) and the other exercises from your book, "The Complete Book of Zen".

It is wise of you not to attempt the Small Universe without learning personally from a competent teacher. Yes, "Lifting the Sky" can bring many wonderful benefits.

I read an interesting article on Sifu Yap of the Five-Ancestor Style. He engaged a high ranking karate-ka in arm banging, resulting in the karate-ka's arms being black and blue but Sifu Yaps arms remained normal. As I have trained in karate before, I know how tough their arms are so this indeed proves the greatness of the Chinese arts.

Sifu Yap Cheng Hai is my siheng, or senior classmate, in my lineage from Sifu Chee Kim Thong, the Patriarch of Wuzu or Five-Ancestor Kungfu. I did not have the opportunity to train with him while I was learning Wuzu Kungfu because I learned from my Sifu's eldest son, Sifu Chee Boon Leong in Dungun (Malaysia) which was my Sifu's hometown, while Sifu Yap Cheng Hai helped my Sifu teaching in Kuala Lumpur. However, years later I met him in the Malaysian Federation of Chinese Martial Arts where he was the Chief Judge for competitions.

Sifu Yap Cheng Hai is well-known for his internal force. He can leisurely hold out his arms and two able-bodied adults can swing on them. Despite being highly accomplished in kungfu, he is a soft-spoken gentleman. He is also an accomplished feng shui master and successful banker.

Sifu Yap Cheng Hai of Wuzu Kungfu is well-known for his internal force. This picture is taken from http://www.ychacademy.com/htdocs/about-ych.shtml .

What I find strange is that when karate practitioners are defeated they never ask "why"?

Many of them realize the damage they have done to themselves in their training and turn to Taijiquan hoping it may relieve them of their injuries. Unfortunately they often end up learning Taiji dance instead of genuine Taijiquan.

I am very much interested in learning Kung Fu. I would like to know whether there is any age limit, and do you conduct any lessons in Kuala Lumpur.

There is no age limit in practicing kungfu.

Understandably, those who are too young (like babies), too weak or too old are not suitable. Nevertheless, my oldest student was 87 when he started learning Shaolin Kungfu from me. 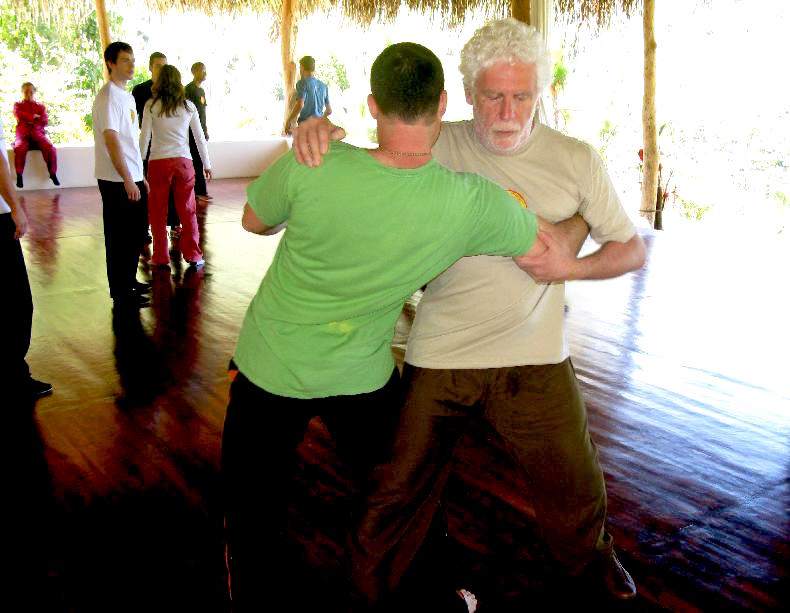 I took a course with Sifu Rama. It was the first time I felt chi flow,

Sifu Rama is an excellent teacher, so your good result is expected.

I had a strange feeling, and a calling to continue doing this. I really want to have some guidance in this matter.

It is quite normal that the first time you experience a chi flow, you may feel strange. Different people may have differenct sensations of chi flow. Some common sensations are a feeling of warmth or some tingling effects, especially at the finger tips. Some may feel as if insects crawling on their skin. Others may feel as if warm water or some mild electric current is flowing though them. Often their body may be swayed by the chi flow.

Whatever the sensation is, just let go and enjoy the chi flow.

Sifu Jose Antonio is our resident instructor in Ecuador. His e-mail address is jat@wahnam.e and his telephone numbers are 2894-895 / 2895 415. After learning from Sifu Rama in a course, it is highly advisable to continue your practice with Sifu Jose Antonio in a regular class

If Sifu Rama is your first teacher in Shaolin Wahnam, you should address him as your "Sifu", address Sifu Jose Antonio as your "Siheng" even if you later learn from him, and address me as your "Sigung".