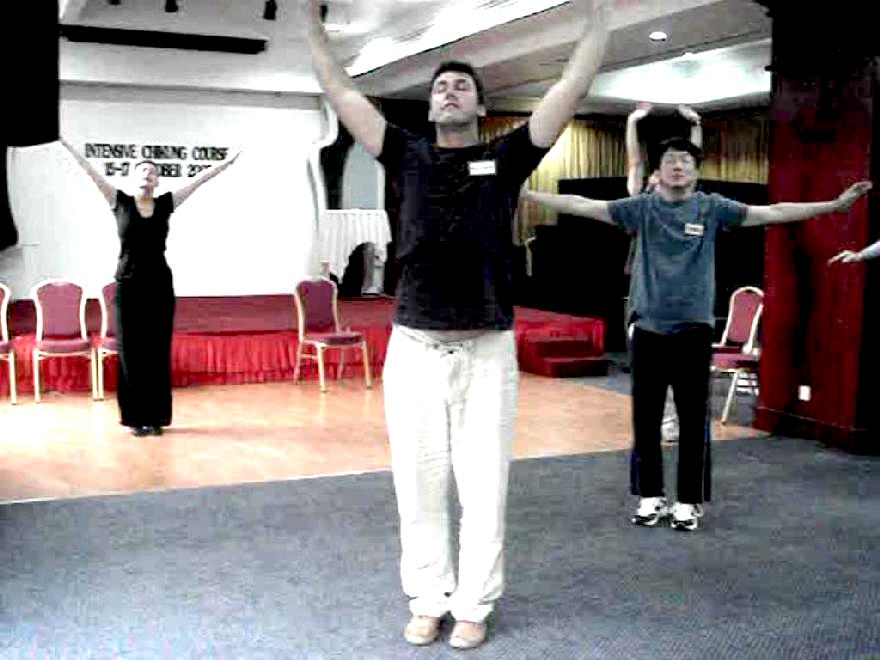 I was reading the question-answer section and you say multiple times that external exercise like pushups, jogging, and sit-ups are unhealthy. Your argument is that these external exercises overwork internal organs so, overall, they are a detriment to one's health.

What I mean is that doing external exercises excessively, as many people do without realizing, is harmful. It over-works the internal organs.

Depending on the activities he is doing, a person breathes between 10 to 30 times per minute. If he forces himself to breath 60 or more times per minute, it is harmful to his lungs.

When he is young, he may be able to withstand the harm, often called punishment by many people who exercise vigorously. But the damage is done, and when he gets to middle age, the harm may manifest as health problems.

The situation is different with a chi kung practitioner. He never over-trains himself, while he gradually strenghten his internal organs. Suppose his lungs can take 30 units of work at the start of his training. After a few days of daily training, he improves his work capacity to 32 units.

How does this happen? It is due to two factors. First he clears his internal organs of blockage. Secondly he strenghtens them. Suppose his lungs are choked to 70%; he uses only 30% of his lung capabilities. This, in fact, happens to most ordinary people. They only operate at about 30% of their potential.

As the chi kung practitioner practices his chi kung, his chi flow clears some blockage. Let us say that after a few days, his chi flow clears just 1% of his blockage. This means now he has a blockage of 69% instead of his previous 70%. Hence, now he has improved the work capacity of his lungs from 30% to 31%. In reality the improvement relationship between blocage and work capacity may not be a one-to-one basic as other factors are also involved, as we shall see presently, but we uses this one-to-one relationship here for easy understanding.

Besides clearing blockage, chi flow also massages and nourishes the lungs. In other words, besides clearing away toxic waste that has been deposited in the lungs, chi flow also makes the lungs more resilent, and brings nutrients to them to make them stronger. Let us say that this improves the work capacity of the lungs by another 1%. Therefore, by practicing chi kung daily, the practitioners has improved his lung capactity from 30 to 32 units. Over a period of daily practice, the practitioner would improve his work capacity of his lungs many times.

Scientists have found out that the average intake of air by an ordinary person in one breath is about 500 cc. But the air intake of a typical chi kung practitioner is about 1500 cc, whereas that of a chi kung master about 3000 cc.

All other organs are also improved as a result of practicing chi kung daily. Hence his work capacity is increased to a level ordinary people often do not imagine possible. Students at my Intensive Chi Kung Course, for example, could run round a football field without panting or feeling tired after just a few days of training in the course.

You also say that the damage to internal organs only shows up at about middle age. If this is true, then how come people like Jack Lalanne are still going strong. On his website he says that he started doing exercises at 15 years old. To this day, he still exercises 1.5 hours in the weight room and 0.5 hour swimming. He's about 95 years old I don't think he has any damage to his internal organs or he wouldn't be living at 95 years of age.

I am very happy that Jack Lalanne is fit and healthy even at 95. This is a great achievement indeed.

Jack Lalanne is an outstanding exception. Many people who underwent aggressive physical training in their young days, including top-class athletes, became sick and weak when they reached middle age. 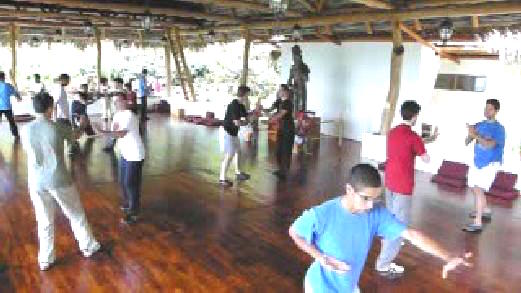 While we places much importance on combat efficiency in our Shaolin and Taijiquan training, we place greater importance on health, vitality and longevity

In fact, I think he is older than what most chi kung/martial arts masters live to. Who knows, he could even live for another 10-15 years.

We certainly wish him to live for many, many more years.

On the other hand, you may be surprised that it was a pity some internal art masters did not live to very old age! The patriarchs of Yang Style Taijiquan were some notorious examples. This could be due to their channeling their energy for combat instead of for health and longevity.

In regards to running, it has been scientifically proven to extend your life. Researchers in Rotterdam concluded that people who run about 30 minutes per day, five days per week extend their lives by 3.5 to 3.7 years.

I have not done a detailed study or research in this area, but I believe some other scientific research shows that regular running is detrimental to health.

Friom the chi kung perspective, regular running is unhealthy. The continual clashing of the feet with the ground produces shock waves along meridians up the legs and body that could harm internal organs. The constant bouncing of internal organs in the body is also unhealthy. Worse, the internal organs are over-worked, and toxic waste is not disposed off in time.

Humans are made for walking, not running. Running may occur in emergencies, but should not happen on a prolonged, regular basis. 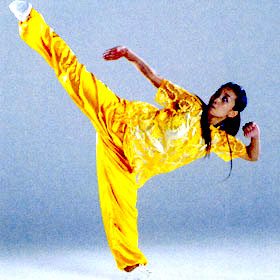 I hope I didn't come off as rude, I am just curious as to why you think external exercise is bad, even with all the evidence to the contrary. I don't have access to Shaolin kung fu or chi kung teachers, so I rely on external exercises to keep me healthy. If you think that I am harming myself by doing pushups and the like, please tell me why. Thank you very much.

You are not rude. In fact you are respectful in your questions. It is wise to seek different opinions.

I believe some research has shown that demanding physical exercise like long distance running and weight lifting is detrimental to health. Many of our students underwent such demanding training before and became very unhealthy. Practicing chi kung restore their good health.

Not all Shaolin or martial art training today is healthy. Shaolin or martial art training where students are constantly pushed to their physical limits or where injuries from free sparring are not attended to, is detrimental to health. On the other hand, chi kung and Taijiquan, even when they are practiced as physical exercise, are generally healthy.

I am interested in learning Shaolin Kung Fu. My main goal is to train in China, but the big question is where do I start?

First of all you need to know that what is popularly taught in China today is modern wushu and not traditional Shaolin Kungfu.

The difference lies in their training method and application. Generally modern wushu training is external like gymnastics, and is mainly used for demonstration. Much of genuine traditional Shaolin Kungfu training is internal involving energy and mind, and is meant for combat efficiency, good health and spiritual cultivation.

There are many schools in China teaching excellent modern wushu. You can find them through the internet.

Schools teaching traditional Shaolin Kungfu are rare in China today, but there are many outside China. You can also find them through the internet. However, not many of these schools pay much attention to internal training and spiritual cultivation.

I have a question for Sifu Wong to see how advanced is his knowledge about Chi Kung. I would like to ask if he knows how to fuse yang and yin energy in dan tian.

Firstly, I shall answer your question directly. Yes, I know how to fuse yin and yang energy in the dan tian.

Now, I would like to elaborate on the answer, which may be very different from what you want.

Different masters and different people may use the terms "yin" and "yang" differently. We in Shaolin Wahnam use the terms in the same way as Chinese philosophers and masters in the past used them, though their meaning and significance are actually little understood by many people, including many Chinese, today.

Tin and yang are symbols referring to two opposite yet complementary aspects of the universe. They are not absolute references for any particular things or concepts. Hence, yin and yang may have different meanings in different context.

In other words, you cannot point to a certain thing like a table, or a concept like wisdom, as yin or yang. For example, you cannot say the table is yin, or wisdom is yang.

Let us take an easier example. We usually refer to a man as yang. This is because we compare him with a woman. Although the woman is not mentioned, it is understood. Suppose there were no women (which would make the world rather uninteresting), then men could neither be yin nor yang.

I can circulate my energy in my dan tian in a small universal flow, which means yin energy at the lower part of the dan tian can be fused with yang energy at the upper part. I can also use the energy that brings nourishment to my cells to protect my body, and vice versa, meaning I can fuse the yin energy with the yang energy. 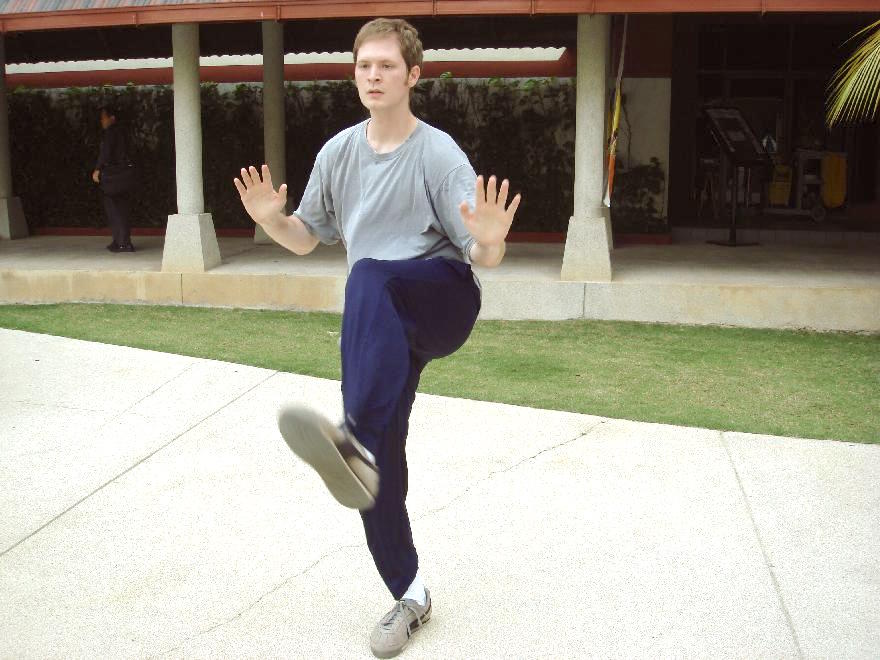 Chris of Shaolin Wahnam USA demonstrating a kungfu kick, which is very different from a wushu kick

What do you think it needs to make a real hard strike with the hand?

You can make a real hard strike using external strenght or internal force.

If you prefer external strength, an effective method is to practice hitting a sand-bag a few hundred times every day for a year. A strike by your hand can cause serious damage to ordinary people.

When you are more advanced, your strike needs not even be hard. You may give an opponent a seemingly gentle tap, yet the damage can be more serious than a hard strike.

When you have practiced "Lifting Water" or any internal force training daily for a year, the internal force can be used for many benefits besides making a hard, or a soft, strike on opponents. It will, for example, strengthen your internal organs, give you more stamina, and enable you to enjoy your work and play. The external strength derive from hitting a sand-bag is quite limited to only striking opponents.