TO ME IT IS ALMOST A MIRACLE 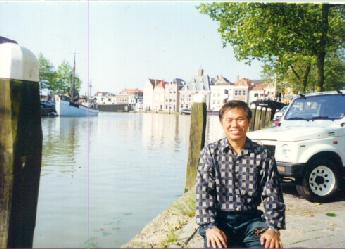 Sifu Wong in Holland
To Me it is Almost a Miracle

My daughter had an accident on April 21st, 1999. She was overrun by a truck. One of the back wheels rode over her buttocks. Three hours after the accident she was still conscious and was able to communicate with me. She went through multiple surgeries and the prognosis was uncertain.

I was worrying about the fixation of the fractures, but the nurses and doctors told me to wait and see if she could survive the first few days when it was very critical. I called Sifu Wong to help her. He was in Toronto, Canada at that time and he wasn't able to come to Holland. He proposed to send chi from long distance. He did send the chi and said to me that he cleaned out the infection from the wound.

From then on the prognosis looked better, but you never know if that came from the surgery or the chi or both of them. The most striking evidence I saw was when my daughter got severe abdominal/stomach pain several weeks after the accident when she was still in hospital. She threw up and had diarrhea for the whole night and the morning after. When I came I immediately called Sifu Wong to overcome the condition. He was in Calgary, Canada at that time. I was worried my daughter would get dehydration. I came back to her room and held her hands. After about half an hour she fell asleep and from then on the pain was less and less. Later on I asked Sifu when he did send the chi. (I didn't tell him what had happened to my daughter.) He answered right away that he sent the chi immediately after I had called him.

The third time was when he visited my daughter and give chi right away. She felt dizzy when she received the chi, and the next day she felt she had one of the best days of her life, although she didn't realize it was because of the chi she had received. From then on she progressed rapidly.

Now she does chi kung regularly every day. It has been almost three months since the accident occured. She can now walk for approximately one hour without crutches. My feeling about chi kung is that it doesn't work in a dramatic manner from one second to another second; but it works in a more subtle and consistent way that sometimes is difficult to appreciate. To me it is almost a miracle. From this relatively short experience I can conclude that chi kung has some place both in health and medicine and that "long distance" chi kung is not a far-fetched story.