Could you please show a Shaolin Kung Fu pattern to counter the attacks shown on the pictures attached? (Please see the pictures above)

I threw the question to my students at the Shaolin Kungfu course I recently conducted in Toronto in October 2005. They responded with numerous Shaolin patterns to counter the attacks shown in your photographs. You may view their responses in video clips with links shown below.

“Teisho-uchi” in Karate is similar to “Devil King Waves Fan” in Shaolin Kungfu. Two counters are as follows. Gordon chops at Michael's neck using a pattern called “Carp Skims through Water”, which is similar to “Devil King Waves Fan”, except that in the “Carp” pattern the attack is a palm chop whereas in the “Devil King” pattern it is a palm slap. Michael wards off the attack, immobilizes Gordon's attacking arm and throws him over the hip using the Shaolin pattern “Cross Hands Lock Arm”.

You can view a video clip of this movement here. Gordon is a Shaolin Wahnam kungfu instructor in Canada and Michael is a former international wushu champion.

A simple, direct and effective counter is demonstrated by Anton Skafar. As Eugene attacks with a palm chop, Anton responds with “Single Leg Flying Crane”, warding of the attacker's two hands and simultaneously kicking his groin.

“Tora-guchi” in Karate is similar to the Shaolin pattern “Monkey Steals Peach”. Michael intercepts Emiko's attack, and fells her to the ground using the Shaolin pattern “Golden Thread Suspends Gourd”. Emiko is a Shaolin Wahnam kungfu instructor in Canada. Both Emiko and Michael are former international wushu champions. You can view a video clip of the counter here.

A simple, direct and effective counter against an attack at the groin with the pattern “Monkey Steals Peach” is shown by Alex. As Joe attacks Alex with “Monkey Steals Peach”, Alex “sinks” back to avoid the attack and counters with “Reverse Hanging of Golden Lotus”. A video clip showing the movement can be viewed here.

The Karate attack known as “Shuto-ashi-hara” is similar to the Shaolin pattern “Horizontally Sweeping Thousand Soldiers”. David Ko attacks Michael Chow with “Horizontally Sweeping Thousand Solders” Michael retreats his leg backward to reverse David's advantage of leverage, and responds with “Han Emperor Chops Snake” to fell David to the ground. Both David and Michael are former international wushu champions. A video clip showing the movement can be viewed here .

In another example, Anton sweeps at Emiko's neck with “Horizontally Sweeping Thousand Soldiers”. Emiko moves a leg backward to reverse Anton's leverage advantage and presses him down with “Lohan Tames Tiger”. You can view the movement here .

The Karate attack known as “Kubiwa” is similar to the Shaolin pattern “Double Dragon Plays with Pearl”. Eugene attacks Anton with this pattern. Following Eugene's momentum, Anton turns his head accordingly and counters with “Hungry Tiger Snatches Goat”. The counter can be viewed here .

Here is another counter against the head lock from behind. David attacks Emiko with “Double Dragons Play with Pearl”. Emiko retreats her leg to neutralize David's advantage, then throws David over the shoulder using “Farmer Hoes Field”. Emiko's beautiful throw and David's skilful break-fall are shown here

Take note that both the attack and the counter patterns shown here are deadly. The head lock may result in breaking the opponent's neck. The shoulder throw may result in breaking the opponent's spine. Either technique can kill or maim an opponent. These techniques must not be attempted by untrained persons. Here Emiko and David are not hurt because they are both well trained. Both of them are also former international wushu champions.

All martial arts should be combat arts, but interestingly today this is not so. In fact most martial arts today have lost their combat function, and have degraded into demonstrative forms or gymnastic exercises.

Taekwondo was my first which I believe is a great starting art. I have now “transitioned” to the practice of Chinese arts from Japanese arts, which is one big transition at that!

Taekwondo is actually a Korean art. Karate is Japanese, and Kungfu is Chinese. But today most kungfu styles have lost their combative aspects, whereas most styles of Taekwondo and Karate are still combative. 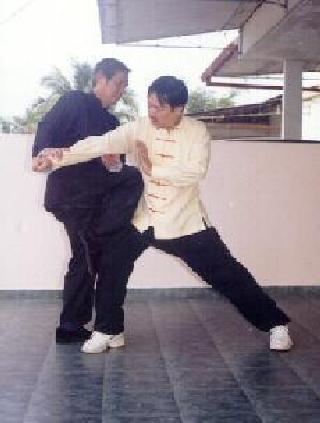 All martial arts, including Taijiquan, are combat arts. The photograph above shows Sifu Wong applying a Wahnam Taijiquan pattern “Throw Knee at Chest” at an opponent.

I never was and still am not a huge fan of “muscles” or external arts. Now my attention is with internal styles.

Most other kungfu styles as well as most non-Chinese martial arts, like Taekwondo, Karate and Kick-Boxing, are external styles.

My friends are enormous practitioners of martial arts and I can't stand to see them say they've mastered the “one inch punch” technique simply by applying raw force through a small distance. I know there's more to the martial arts in general, and that this power is the essence of internal styles. (But who am I talking to a grandmaster like I hold all this knowledge.) Any advice on this would be greatly appreciated.

Although the “one-inch punch” is usually internal, your friends are not wrong if they can apply force within a small distance even though the force is raw or mechanical.

You are right. There is much more to martial arts than the one-inch punch. Nevertheless, because internal styles are so wide as well as deep, different schools and different masters may refer to different things as their essence.

I do need to start setting my priorities straight.

This is a wise statement. At 13 of age, your top priority is not to excel in martial art (though this is a noble objective to aim at) but to be a good son whom your parents can be very proud of. 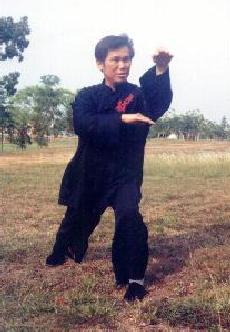 A Snake pattern from Shaolin Kungfu

My full interest is with Snake Style Kung Fu at the moment. Any advice on this style would be greatly appreciated.

While many schools of kungfu have snake patterns in their repertoire, there is no one established school of kungfu that uses the Snake exclusively enough to call itself the Snake Style.

I'm a philosopher in the raw, and a fighter in the bare. Please give me somewhere to start and last.

As a philosopher, you would not like to hurt yourself in your martial art training. Hence, a martial art where free sparring means punching and kicking one another randomly is not for you. As a good fighter, you would not want to be weak in spirit. Hence, studies which involve route learning and memorizing, which would make your spirit dull, are not for you.