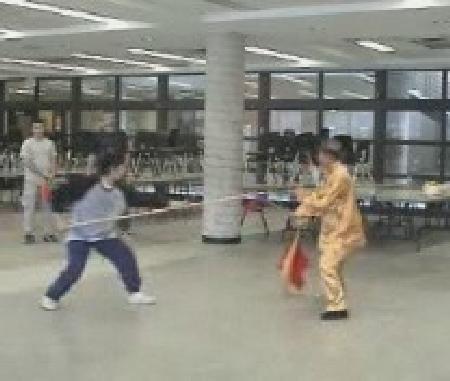 Application of Single Knife against Spear (1)

The spear is considered as the king of weapons because it is technically most difficult to defend against a spear thrust. The video clip here taken at random during a Special Shaolin Kungfu Course in Toronto in 2003 shows Sifu Wong demonstrating a Single Knife technique a Spear thrust. The knife pattern is known as “Throw Water Up a Rice Field“ using the upward slash technique. The knife exponent must maintain close range with the spear exponent to gain a technical advantage. 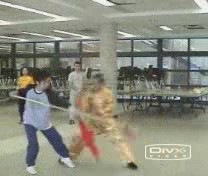 The upward slash and the reversed slash are two of the most formidable techniques of the Single Knife (often called a Broadsword in some literature). This video clip, taken randomly during the Special Shaolin Kungfu Course in Toronto in 2003, shows Sifu Wong demonstrating these two Single Knife techniques using the patterns “Bail Moon from Sea” and “Reversed Hitting of Purple Bell”. After Michael Chow has avoided the first upward slash, Sifu Wong continues instantly with the second reversed slash of the Single Knife. It is important to control the spear while transiting from the upward slash to the reversed slash. 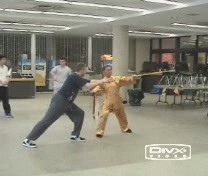 The horizontal sweep is another formidable technique of the Single Knife. After deflecting a spear thrust, Sifu Wong grips the spear shaft and simultaneously horizontally sweep his Single Knife at his opponent, using a pattern called “Horizontally Sweeping a Thousand Armies”. 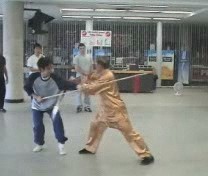 Matching the Single Knife against the Spear is an important and very interesting aspect in kungfu weapon training. The spear is light and long, making it extremely fast and versatile and its thrust a very deadly technique. In any attack against a spear holding opponent, it is essential to “cover” this deadly aspect of the spear. Sifu Wong demonstrates how this can be done. He also shows the danger one would expose himself to if he does not “cover” the spear adequately while moving in to attack. 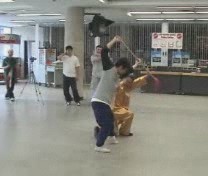 Besides the “thrust”, the next formidable technique of the spear is the “circle”. Hence, any exponent who wishes to counter a spear-holding opponent must know how to counter these two deadly techniques. This video clip, taken randomly at the Toronto Special Shaolin Kungfu Course in 2003, first shows how Michael Chow uses the “circle” to neutralize Sifu Wong's grip on his spear and injure the opponent in return. Then Sifu Wong demonstrates how to neutralize the “circle” technique of the spear, and counter-attack with a reserved slash of the Single Knife, using the pattern “Point at Star and Admire Moon”.

Single Knife against Spear from Wong Kiew Kit on Vimeo.