BRINGING OUT THE BEAUTY OF SHAOLIN KUNGFU IN COMBAT

Bringing Out the Beauty of Shaolin Kungfu in Combat

The real beauty of Shaolin Kungfu lies not in its demonstration, although it is actually beautiful to watch, but in its application, both for combat as well as non-combat purposes. Practicing Shaolin Kungfu correctly gives us good health and vitality enabling us to enjoy our work and play everyday of our life for a long, long time. At its higher level, it gives us spiritual joy.

Its functional beauty in combat is amazing, enthralling even the opponent. Unlike in many other martial arts where a victor has to hurt his opponent, often brutally, to secure victory, a high level Shaolin practitioner may defeat his opponent so convincingly but without hurting him that the defeated opponent often accepts his defeat willingly yet graciously.

Some of such beauty of Shaolin Kungfu in combat was brought out at the Special Shaolin Kungfu Course in September 2005 when Sifu Wong helped course participants to refine the efficiency of the combat sequences which they themselves composed from their specialized sets. Can these combat sequences which are pre-arranged to flow in a certain order as preparation to meet certain combat situations be used in real fights where attacks do not come in any fixed order?

The effectiveness of these combat sequences are tested out in free sparring shown in another series of video clips. Their effectiveness have also been confirmed by numerous members of our Shaolin Wahnam family in real fights.

This series of video clips show some lessons in Beauty of Shaolin Kungfu. As usual the video clips were taken impromptu and are released here without editing.

The Force and Technical Advantages of the Dragon Movement

This video clip shows Chris of Scotland, who specializes in the Monkey Set, poses as an opponent to help Sifu Markus of Finland to refine his combat sequences from his Dragon Form Set. Sifu Wong explains to Sifu Markus the use of the Dragon movement to enhance internal force and technical advantages.

Sparring in a Relaxing Manner

Sifu Jordan of Shaolin Wahnam England and Hendrik of Shaolin Wahnam Germany are refining their combat sequences from their Five-Animal Set. The uninitiated may wonder whether their being so relaxed and not using mechanical strength could be effective in a real fight, obviously not realizing that internal force can be exerted at the point of contact, and the more relaxed they are the more combat efficient they can be.

Moving Forward to Counter a Kick 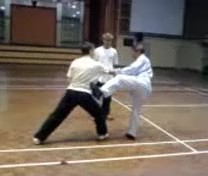 If you grip your opponent's arm while executing a monkey kick, he would be unable to move back to avoid your kick. You should grip him firmly first before applying the kick. But if you were in the receiving position, how would you counter the attack? You can counter the whirlwind kick by moving forward!

Internal Force is Generated from the Dan Tian 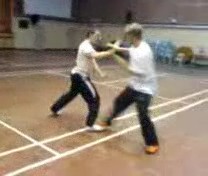 Sifu Wong shows Hendrik how to execute internal force from the dan tian with the twist of his body on a firm stance. The pattern used is called “Dark Dragon Draws Water”. This movement also avoids the opponent's attack while counter-attacking him.

The Tactic of Retreating to Attack 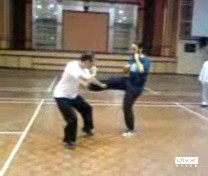 Sifu Tim of Shaolin Wahnam England and Joshua of Shaolin Wahnam USA are refining their combat sequences from their “Five-Animal Set”. Sifu Wong shows Joshua how to use the “thread” technique from “Golden Dragon Plays with Water” to neutralize the opponent's force. He also shows Sifu Tim how to retreat to attack, using the pattern “Single Plucking of Flowers”..

Slowing Down Movements to Examine Strength and Weakness

Hubert from Shaolin Wahnam England and Jonny from Shaolin Wahnam Scotland refine their combat sequences from the specialized set, “Dragon Form Set”. They purposely slow down their attack and defence so that they can better see the strength and weakness of their movements. This is also one of the reasons why Taijiquan is performed slowly in practice. Can they be fast in sparring or fighting if they practice slowly? Yes, if their training is systematic.

The Importance of Body-Movement in Combat 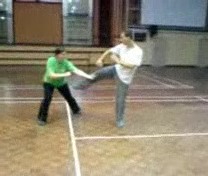 Nicky from Shaolin Wahnam England and Ronny from Shaolin Wahnam Switzerland are working out their combat sequences from their specialized set, “Dragon Form Set”. Sifu Wong demonstrates the use of body-work to implement the tactic of counter-attacking at the same time the opponent attacks.