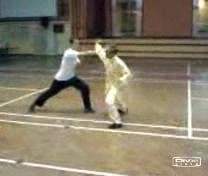 Have you ever wondered how kungfu sets were composed?

To remember these patterns and to pass them on to succeeding students, kungfu masters linked these patterns into sets. For convenience, we call these types of sets that are composed of individual patterns, “pattern-sets”. An example of a pattern-set is “Tiger-Crane”. Except for the starting and the concluding patterns, each of the 36 patterns in this set are different. Another example is “Dragon-Tiger”. While a few patterns are repeated, most of the patterns in this set are also different from one another.

Kungfu masters also discovered that if they linked certain patterns into a sequence and applied the sequence instead of individual patterns in combat, they would have various advantages. If they executed an attack using the pattern “Black Tiger Steals Heart”, for example, in theory their opponents could respond in countless, unpredictable ways. But in practice their responses were quite predictable, and would fall within a range of probable responses. Hence, masters could work out suitable combat sequences in anticipation of how their opponents would response.

It is pertinent to remember that these terms, “pattern sets” and “sequence-sets” are for convenience; they are not rigid definitions. It may not be easy, for example, to classify “Lohan Asks the Way” as a pattern-set or a sequence-set. We can call it a pattern-set because its basic unit is a pattern. A major purpose of the set is to enable us to know the four basic hand attacks and their four counters. It is different from “Black Tiger Steals Heart”, for instance, where the basic unit is a sequence, and a major purpose is to enable us to apply the sequences, rather than individual patterns, for combat.

However, if we use “Lohan Asks the Way” to practice breath-control, fluidity and speed, we would be using its four sequences rather than its 36 individual patterns. In this case, we may call it a sequence-set, but we could not call it a combat sequence set because the linking of the sequences is not for combat purposes.

We should also give a name to each of the children-sets. Again this is for convenience. Instead of saying “the children-set of the mother-set Dragon-Tiger collectively composed by Simon, Mark and Christ while they attended the Special Shaolin Kungfu Course in April 2005 in Malaysia”, we just say “Dragon and Tiger at Play” or something appropriate and, hopefully, poetic. Suggestions are welcome. Preference of choice will course be given to the relevant composers.

The video clips here show both the effort as well as the result of course participants working on their combat sequences for the Dragon Form Set and the Dragon-Tiger Set. Those for the Shaolin Monkey Set, the Tiger-Crane Set and the Five-Animal Set are listed in another webpage accessible here 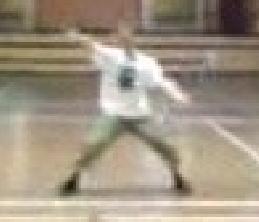 The Dragon Form Set is noted for its fluid body movement and internal force, which are well expressed by Sifu Markus of Shaolin Wahnam Finland in this Dragon Form Combat Set devised by him from his combat sequences. Notice also his agile footwork.

Swerving Movement of the Dragon

Sifu Wong demonstrates to Sifu Markus the swerving body movement of the Dragon in combat. Irrespective of whether the opponent strikes or kicks, a Dragon stylist swerves away from the attack and immediately swerves back to counter attack. 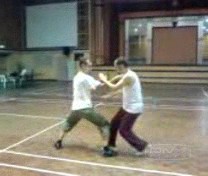 “Dragon Manifests Miraculous Power” (“Loong Yien Shen Wai”) is an important pattern in the Dragon Form Set for force training as well as combat application. Sifu Markus applies this pattern effectively in a few combat situations. He also demonstrates an effective pattern to break the opponent's leg. He explains the philosophy behind his choice of the patterns.

Effective Use of Body-Movement and Footwork 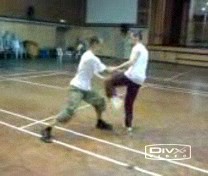 Sifu Markus demonstrates and explains the effective use of body-movement and footwork. He also shows different ways to moving in to attack as well as how to counter- strike as soon as the opponent attacks. All these are Sifu Markus' own composition from his specialized set, Dragon Form. 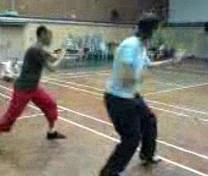 Hubert from France and Jonny from Scotland, who are both assistant instructors, perform their combat application set of Dragon Form based on the combat sequences they have worked out on their own. This set may not make much sense to some people now, but will become meaningful when its sequences are applied in combat shown in the following video clip

Striking the Opponent When he just Completes his Attacks 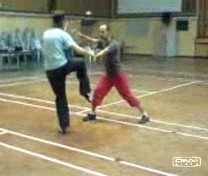 As Hubert and Jonny demonstrate the combat applications of their set, Hubert also explains the philosophy behind the choice of their techniques. They use a number of high level combat tactics, like “countering without defence”, striking the opponent just as he completes his attacks.

The Phoenix in the Dragon Form 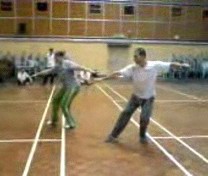 Many people may find it amazing that these kungfu sets were composed by the participants within the few days of the Special Shaolin Kungfu Course. They had to choose appropriate techniques from their specialized sets to meet various combat situations, explained the reasons for their choice, linked the sequences together and perform them fluidly as a set. It is a credit to all the participants that they have done very well. This video shows Nicky from England and Ronny from Switzerland performing the set that they have just composed..

When there is Form, Strike the Form 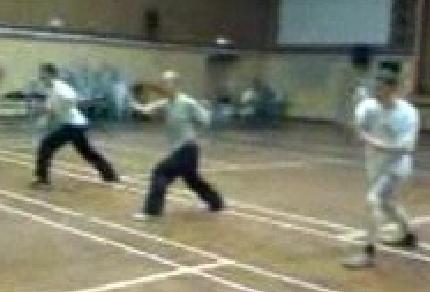 Many kungfu practitioners merely learn and perform sets after sets throughout their kungfu career, but never know how to apply them for combat nor understand the philosophy behind them. This beautiful set shown in the video clip is composed by Simon, Mark and Chris during the Special Kungfu Course itself. They know every pattern and movement well, as it is precisely for their functions or other useful purposes that the patterns and movements are chosen to form the set.

Essence of the Dragon and the Tiger

Sifu Wong demonstrates the difference between the form as well as the spirit of the Dragon and those of the Tiger. Interestingly, although the Dragon is “softer”, it is more powerful.