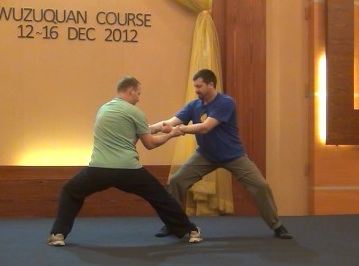 Kneading Hands, or Cuo Shou, is a special feature of Wuzuquan, or Five-Ancestor Kungfu. It corresponds with Pushing Hands in Taijiquan, Sticking Hands in Wing Choon Kungfu, and Asking Bridge in Hoong Ka Kungfu.

There is, however, a crucial difference. While the onus of the others is on training, the onus of Kneading Hands is on testing. Other people may not know what is meant here though the meaning is straight-forward, but those who attended the Wuzuquan Course held from 11th to 17th December 2012 in Penang understand the meaning clearly.

If you are wondering what it means, here is a clue. In the videos below you will find Sifu Jeffrey performs Double Blcok before Sifu Roland rams his arm on Sifu Jeffrey’s arms.

The videos were not especially recorded for demonstration. They were taken during the course without any editing. Indeed, Sifu Jeffrey, Sifu Roland and other course participants just learned Kneading Hands from Grandmaster Wong when these videos were recorded.

You can also view the complete set of Kneading Hands here