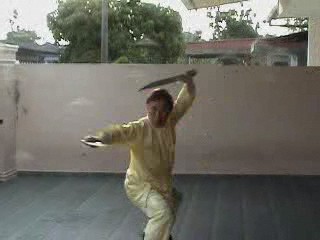 The Butterfly Knives or Double Southern Knives were very popular in South China where narrow streets and crowded environments favored such short, light weapons for combat.

The set below, called “Human-Character Double Southern Knives”, is composed from the essence of two sets — “Crossroad Double Southern Knives” of Uncle Righteousness of Southern Shaolin, and “Human-Character Knives” of Sifu Choe Hoong Choy of Choe Family Wing Choon. “Human-character” is so-named because the two knives are held like the Chinese character for “human”. This is an effective technique to dislodge an opponent's weapon. Do you know how this can be done by looking at the pictures of the relevant pattern?