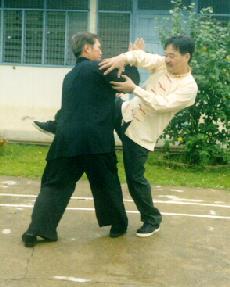 What could a Taijiquan master like Yang Lu Chan do if a Muai Thai fighter grabs his neck or head and throws continuous knees into his ribs?

If he is a modern Taiji dance instructor, there is nothing much he could do, as he neither has the internal force nor knows the techniques to defend against any attacks. He is often quite helpless even if a Taekwondo blue belt attacks him with a high kick or an ordinary untrained person rushes in with haphazard punches.

A Muai Thai kickboxer is a ferocious fighter, and his knee jabs, even a single one, can break the ribs of an ordinary person. When faced with continuous knee attacks from a Muai Thai fighter, the Taiji dance instructor as well as all his students will, unfortunately, become sitting ducks. This is inevitable because in all their training, they have never learnt and practised how to fight. 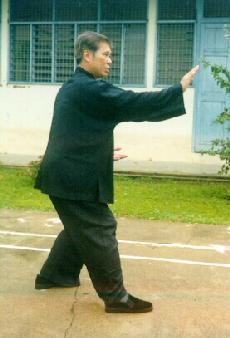 But a Taijiquan master is different. If he has practised Taijiquan as an internal martial art, which it is, he will have many options to use against Muai Thai knee attacks. One option, which may come as a surprise to Taiji dancers, is the Taijiquan pattern called "Repulse Monkey" as shown in the picture above.

In fact the name of the pattern "Repulse Monkey" is very apt. In kungfu, round-house kicks which are called whirl-wind kicks in kungfu terminology, and knee jabs are characteristic of the Monkey style. "Repulse Monkey" is an effective counter against such kicks. The sequence below shows an application of "Repulse Monkey" against knee attacks. 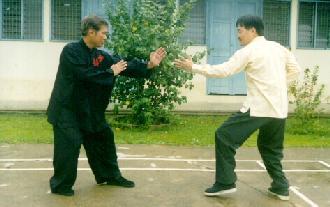 I use the Taijiquan poise pattern "Lifting Hands" to observe Goh Kok Hin. Goh moves in with a thrust punch, and I response with the typical Taijiquan counter, the "peng" technique of "Grasping Sparrow's Tail". The second picture above shows that I am in the process of moving my front leg backward to avoid the full force of Goh's attack. 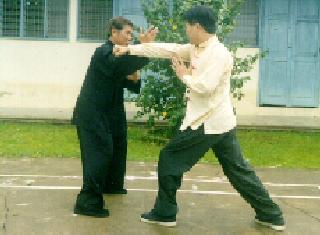 But Goh's initial attack is a feign move. As soon as I use the "peng" technique", he swiftly moves forward, pushes my head down towards his right, uses his left hand to guard against a possible counter attack of my right hand, and strikes my left ribs with his right knee.

If you have fought with Muai Thai fighters often, you would have noticed that they do not hold your head on both sides of your neck as they strike you with their knees, because as strangling is not permitted in Muai Thai rules, doing so would not give them any advantage. On the other hand, holding your head on one side and pulling it down towards the striking knee will cause you to loose balance, giving the Muai Thai fighters an advantage. 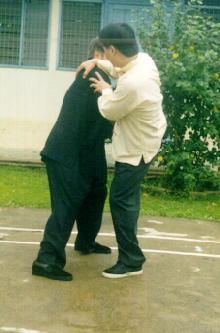 To counter Goh's knee attack, I continue moving my left leg but instead of moving it backward directly as initially intended, I move it in a big arc backward diagonally to my right so as to avoid the full force of the knee attack. At the same time I place my left arm, bent at the elbow, beneath his right thigh and pull his leg towards me, and use my right arm to push away his two arms and then push at his face. Continuing the combined actions, I fell Goh to the ground, still holding his right leg in my left bent arm.

If you successfully apply "Repulse Monkey" this way, even if your opponent intends to throw continuous knees into your ribs, he would be unable to do so now. You have a few ways to apply your coup de grace. You could, if you want to be nasty, step on his groins; but it would be sufficient if you just kick his left knee. 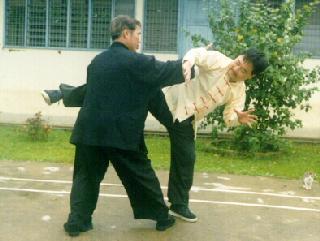 The pictures below show another sequence countering knee attacks. 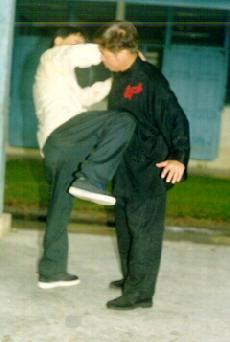 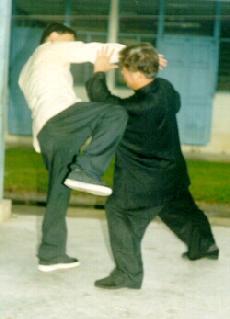 In the first picture above, Goh Kok Hin attacks me with a typical Muai Thai knee jab to my ribs. I move my right leg diagonally backward to avoid the full force of his knee jab, and simultaneously jerk down my left elbow to deflect his knee attack. Immediately I push away his right arm and strike his chest with my right palm. A palm strike packed with internal force by a Taijiquan master on the heart or lungs of an opponent could kill or maim him, giving him no chance to continue his numerous knee jabs.

Suppose a young child of five uses continuous Muai Thai knee jabs to attack a powerful adult. Suppose the adult is brutal and has no care for life. He needs not bother about the continuous knee jabs, which could not cause him much harm. All the brute has to do, though extremely cruel, is to give a powerful blow to the child's head, and this could kill or maim the child.

There is a tremendous gap between the standard of martial arts today when they are taken as sports, and that of the past when they were seriously used for life and death combat. In terms of power and combat efficiency, martial artists today, including ferocious Muai Thai fighters and myself, when compared to martial art masters of the past like Yang Lu Chan, are like children compared to powerful adults.

So if a modern fighter were so foolish as to grab Yang Lu Chan's neck or head and threw continuous knees into his ribs, the Taijiquan patriarch might not even bother to apply those counter techniques illustrated by Goh and me above, he would just give the attacker a powerful palm strike. Yang Lu Chan would not kill him, although he could, but he would send the attacker falling many feet away.

Hence, in life-death combat in the past no experienced fighters would grab his opponent's head or neck and throw continuous knees into his ribs. Not only such a mode of attack would render the attackers unprotected and therefore exposed to possible fatal counter strikes -- something no experienced kungfu fighters would ever do -- it was also not necessary.

If, for some reasons, the attacker wanted to break the opponent's ribs with knee jabs, considering the tremendous power past fighters had, just one or the most two jabs would do. If he could not bring the opponent down with one or two knee jabs, he would jump away or continue with other modes of combat. Continuing to throw ineffectual knee jabs would make himself vulnerable to deadly counter attacks.

Let us examine another counter a Taijiquan master could use against a Muai Thai knee attack. 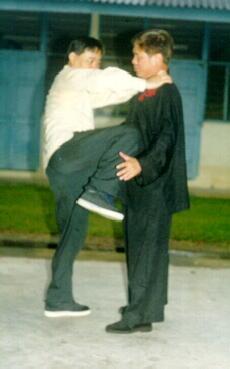 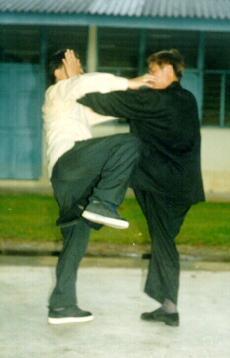 In the first picture above, Goh Kok Hin grabs my neck and strikes me with his right knee, using a pattern known in Shaolin Kungfu as "Jade Girl Kicks Shuttle". Please note that here Goh is holding my neck on both sides, and not on one side as in a typical Muai Thai knee jab. Such a way of holding an opponent's neck is often done by those not familiar with Muai Thai but imitate Muai Thai knee jabs.

Paradoxically, experienced kungfu fighters would also hold the opponent's neck in this way -- for a different reason. As kungfu is not limited by safety rules, the kungfu fighter not only holds the neck but also presses on vital points on the neck. Hence, his attack is not just from his knee but also from the thumbs and fingers of his both hands. The knee attack may be damaging, but the finger attacks can be fatal; that is why this is not allowed in the sport of Muai Thai.

In this "Jade Girl Kicks Shuttle" pattern Goh has to be careful of my possible counter-attack. Should I be foolhardy to ignore his attack and counter strike at the same time, he would be ready to neutralize my counter. For example, I may strike his chest with my right palm, in which case he would lower his left hand to brush away my palm strike, while continuing his right finger and knee attacks.

The Taijiquan pattern "Golden Cockerel Stands Alone" is excellent to counter this triple attack. I lift up both arms to jerk at Goh's elbows, thus dislodging his hold on my neck, and simultaneously lift up my left knee to deflect his right knee jab. Immediately I kick at his groins with my left shin.

But don't think that this "Golden Cockerel" will finish off Goh. As a properly trained Shaolin fighter, he would know the weakness of every attack pattern he uses, and would therefore be prepared for any eventualities. In this case he has a number of effective response to the Golden Cockerel counter attack. One way is to bring his right leg backward to a left Bow-Arrow Stance, and simultaneously strike my attacking shin with a left whip-fist.