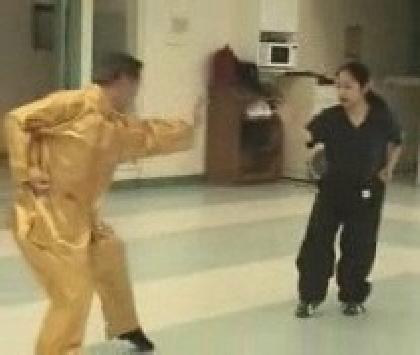 Years ago, I first heard of chi kung through my Chinese doctor, who told me of her master, a famous healer called Dr. Yan Xin. She told me of this strange phenomena called “distance chi transmission”. Though I did not discount it, I found the whole idea incredulous and a little frightening.

I went on to learn chi kung through other systems and schools, but never experienced any of the so-called wonders and benefits I was told I would receive. So, I came to think (erroneously) of chi kung as nothing more than a soothing exercise that was good preparatory work for hard athletic training and mental relaxation. I did not think it had the power to invoke actual physical transformation.

Little did I know that in December 2000, I would fly half-way across the world to study with another chi kung master (Grandmaster Wong Kiew Kit) who could also send chi long distance.

Thanks to him and his teachings, I was able to gain full recovery back to a life of “quality”. From time to time, I heard other students mention Sifu's long distance chi transmissions. I even read about them in his book “The Art of Chi Kung”. But I never dreamed that I would be so fortunate as to become a direct recipient of his transmissions, not just once, but four times.

Some might consider the recent surgery a life-changing experience, and indeed, it was. But these distance chi transmissions were even more significant and profound for me. With each transmission, my mental paradigm (the eyes through which I viewed the world), went through a transformation.

I would like to share what I received with those who would care to read of what it is like to receive long-distance chi transmission. But first, I would like to pause here and offer my thanks again to Sifu for his generosity and compassion. I know that my swift post-surgery recovery has been greatly influenced by these transmissions.

On the night of the first transmission (this was the night before the surgery), I was lying in bed, just as I had been instructed to by Sifu; I was relaxing, wondering what would happen. After some time, it became apparent that the quality of the air in the room was changing — somehow, everything was more spacious and open. My sense of barriers and boundaries fell away.

Then, I became aware of a deep beat, a very deep and rich pulse, much stronger and more profound than my own little heartbeat. It surrounded me completely and I was absorbed by it. I remained in this state for some time, till it seemed that I gained consciousness again (though I had never lost consciousness or fainted).

When I looked at the clock, a full hour had passed. As I rose up to finish medical preparations for the surgery, I realized, without a doubt, that we humans are deeply connected and that any sense of separation or isolation I had ever felt before was a result of the limitations of my mind. I was awed and amazed by the strength and warmth of the deep pulse, (which I intellectually concluded was but a small indication of Sifu's power).

I also came to see, in the days following the surgery, that, thanks to Sifu's transmission, I had crossed a 'point of no return': I could never go back to ever feeling as lonely or abandoned as I had in my childhood and, well, in the life before this first transmission.

Even now, as I write this account, all I have to do is pause and my being can recall the sensation of the deeper pulse. I am comforted by the fact that I have experienced it, and it sits in my memory, somewhere in the background of the regular comings and goings of my daily activities.

On this night, I was heavily sedated with morphine (this was the second night following the surgery), and so I was not aware enough to feel any deeper pulse. Yet, I was able to perceive that the quality of the room had changed again. Gradually, I became aware of the presence of golden light. It was wrapping itself, or rather weaving itself about my torso.

Soon, there was a web of golden light — a porous belt — glistening all the way from above my solar plexus down to the pubic bone. I felt points of light entering in and out of the abdominal area, almost as if I were being sewn back together again. It is hard to describe, but it felt like I was being sewn back into an invisible network of the Cosmos. The whole experience was very gentle and soothing.

The next day, I wondered if Sifu had been doing this consciously or whether he had just sent the chi and the Universe used it in whatever way best suited my needs. 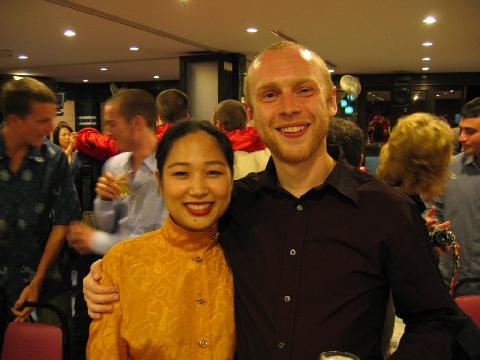 Emiko posing with Darryl, a brother from the Shaolin Wahnam Family while attending the wedding celebration of Sifu Wong's eldest daughter in December 2004 in Malaysia

Third Transmission — “Joy without an Opposite”

Though I was still on strong pain killers, I was a little more present, so I recognized the changing of the air in the room, and the deeper pulse when it arrived. As I lay there, I perceived resounding belly-like laughter swimming in waves all about me, and suddenly I was overcome by the presence of joy as I had never known it.

What I mean by this is that it was beyond emotionality, beyond opposites like ?small' vs. ?big'. It was my first taste of a Joy whose presence felt constant, not fleeting. For lack of a better description, this joy felt like it came from the very foundation of “is-ness”. I had thought that everything had to contain polar opposites in this world, but here I was, tasting and experiencing complete joy and freedom — a joy with no opposite!


Fourth Transmission — “In Spite of Myself”

Simply put, this transmission was nothing like the three that had preceded it. Prior to the designated transmission time, I had been suffering from severe, sharp knife-like pain. This was due to the fact that I had had a reaction to the pain killers and had had to stop taking them. So, I lay in bed, watching the clock, noting its approach towards the hour. I tried to relax, but could not.

My whole body was tensed from pain. I grew anxious as I kept struggling with not crying out or writhing about in my bed: I felt no pulse, no joy, no light. I felt nothing but pain.

In my mind, desperation arose and the thoughts “I'm wasting Sifu's transmission? I can't feel it” kept repeating themselves over and over. I could have cried from frustration and disappointment. As I lay there, the pain increased to such an intensity that I thought I would break. Then, there was a sudden unfurling of pain upwards towards my chest and head: it was no longer localized in the abdomen and thighs, but it had spread all over the body.

I was so worn out from the pain that my mind must have wandered off. By the time, I was resigned to the fact that I had “wasted Sifu's transmission”, about an hour-and-a-half had passed. Ashamed and dissatisfied, I crawled out of bed and shuffled to the bathroom.

It was only at this point that, in hindsight, I became aware of the fact that I had indeed received a transmission: somehow, through all the pain, a bubble of energy had emerged about my body, but I had been unable to perceive it; it was only in the act of rising out of bed, in the departure of the bubble, that I noticed it had been there. I reflected on when it had first emerged and was able to identify that it had appeared subsequent to the upward unfurling of the pain.

Later, I wept when I realized significance of what I had been given: the experiential knowledge that even when I am overcome by suffering and pain, even when I am blinded by my limited perceptions, as long as I ?show up and pay attention', the healing is always taking place. In other words, I am being taken care of and healed inspite of myself. The wonder of this truth still awes me and makes me speechless.

I think that for those of us who believe in chi kung and have benefited from it, my story is just another story of someone enjoying the wonders and gifts of the Shaolin arts.

However, for those who do not know of chi kung, and for those whose illnesses have caused them to lose hope regarding their right to quality of life, health, vitality and happiness, I am hopeful that my story will serve as a source of encouragement to them.

I believe that anyone who a) makes a deep wish to heal, b) is willing to pay the price (i.e. put in the effort to heal), can and will.

Sifu, I have received so much from you. Please accept this letter as a small token of my thanks for your kind investment in my life.

With lifelong gratitude, your student,


Heart's greetings and thanks to Sifu, the Shaolin ancestors, and all of those who have gone before me.