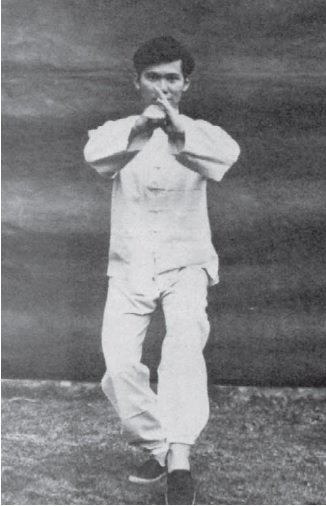 Grandmaster Wong in the 1970s

Kungfu, in the Cantonese dialect of the Chinese language, generally means martial art, though in its wide sense, the term may be used to mean any art. But amongst Chinese martial art experts, the term "kungfu" in its strict technical meaning, is actually used to refer to only one field or area of Chinese martial art, that of training skills or force. In the Chinese language the most equivalent term for "martial art" is "wushu". The transcription here and elsewhere in the book follows traditional Chinese (Mandarin) unless the transcribed term is already established. In Cantonese pronunciation, the transcription is "mou shirt".

For the convenience of practicing the art, "wushu" can be classified into seven major areas:

However, as the term "kungfu" has been generally accepted by Western readers to mean "Chinese martial art", it will be used in this meaning in this book.

A kungfu set is a series of pre-arranged kungfu patterns linked together with some specific purposes. In some styles of kungfu, like Hoong Family Kungfu, there are many kungfu sets, while in others, like Tai Chi Chuan, there is only one basic set. Set Practice is a fundamental element in kungfu training, but it is not the only important element, as many people erroneously believe. The primary aim of Set Practice is to enable students to know and perform correctly variously kungfu movements or patterns.

After knowing how to practise kungfu patterns correctly, students must learn how to use them for combat. It is not enough that the students merely learn the combat functions of kungfu patterns from oral explanation of an instructor. The students themselves must practise the uses many, many times so that they can apply the kungfu patterns flawlessly when needed. This can be realised through Combination Practice. Here two or more students practise together various techniques of attack and counters, and in order for the students to remember the movements and combinations well, the attack and defence techniques are logically arranged to form a Combination Set.

Force Training is a poor substitute for the Chinese term "kungfu". Technically, kungfu means an ability to perform a pattern or patterns excellently, usually with force and speed, and this ability is the result of prolonged, consistent and repeated practice. This ability is usually referred to as "kung", for example, iron palm kung, tiger-claw kung, chi kung, and ching kung. Thus, merely practising kungfu sets or knowing some specific techniques against certain combat situations, strictly speaking, is not kungfu.

Sparring is the logical sequence of Set Practice, Combination Practice and Specific Techniques, and is primarily aimed at preparing students for actual combat. Sparring can be pre-arranged or free, and can be between two persons or amongst many people. Sparring needs to be learnt and practised methodologically; a person without proper pre-requisite training will not be able to make effective use of the kungfu techniques he has previously learnt in sparring.

Practising with weapons is an important aspect of kungfu training. In the past, when weapons could be carried about freely and therefore frequently used in fighting, weapon training naturally was often given more emphasis than unarmed combat. Shaolin disciples, for example, were well known for their excellent use of the staff. Although carrying a weapon is now illegal, weapon training still has its functional value. The procedure in practising a weapon is generally the same as in unarmed kungfu: a student first learns a weapon set, and its uses, then practises Combination Set and Specific Techniques with the weapon, and finally trains force or kung using the weapon and practises sparring.

The practice and application of kungfu are guided by general as well as specific principles. And if we understand the underlying principles, we can not only perform kungfu with insight, but also achieve better result with less time and effort. Knowing the principles often makes the difference between a novice (no matter how long he may have practised the art) and a master. His knowledge of kungfu principles will enable the master to view with perception and appreciation any form of martial art he sees, although he may not have learnt it before.