BENEFITS OF TAIJIQUAN ON SHAOLIN KUNGFU

Dear Sifu, now that you have released the video and picture series for the San Feng Wudang Set, would now be a good time to ask what discoveries and 'ah ha' moments you have experienced during composing the set?

When I reconstructed Wudang Taijiquan from classical sources, I already have practiced and benefited from Taijiquan for quite some time. But what struck me impressively was that the Wudang Taijiquan Set was more like a Shaolin set than what many Taijiquan practitioners conceptualized Taijiquan to be.

Even at this early age I knew that Taijiquan had to be performed fast if it had to be used for combat. This was not a problem for me I just performed it like Shaolin Kungfu. I was able to apply all Taijiquan patterns for combat because of my training in Shaolin combat application. This was quite a aha experience as most Taijiquan practitioners did not know the martial aspect of Taijiquan.

I was quite good at Taijiquan but did not teach it despite many requests. I considered my best to be Shaolin Kungfu, and I wanted to teach my best. It was Rama who rightly commented to me that although my best was Shaolin Kungfu, many people preferred Taijiquan for some legitimate reasons, and it would be a great pity if I did not teach them, that I changed my mind.

It also led to my discovery and aha experience that Taijiquan itself was chi kung, and that it was unnecessary to incorporate other chi kung methods from elsewhere, like Lifting the Sky and Carrying the Moon from Eighteen Lohan Hands, into Taijiquan to develop internal force.

This discovery had far-reaching effects, and later contributed to the flow method and the otherwise ridiculous concept that making any movements, including comical or odd movements, in a chi kung state of mind, we could generate a chi flow or develop internal force! This was indeed amazing, considering that many masters had spent years chasing after internal force but to no avail.

I also discovered and had aha experiences how Taijiquan could enrich Shaolin Kungfu. If a student was rigid in his movement, by practicing his Shaolin sequences as if he was performing Taijiquan, he could not only overcome his rigid problem but make his movements flowing.

I discovered two important reasons why a small-sized Taijiquan exponent could defeat a bigger-sized opponent. One reason was internal force. The other reason was Taijiquan mechanics, and the core of Taijiquan mechanics was waist rotation. By rotating the waist, many Shaolin techniques that were otherwise difficult to perform, became easy.

Waist rotation led to fa-jing, or exploding force. The Taijiquan principle of “starting from the back leg, rotating the waist and ending at the hand” became very useful. By applying the principle of rotating the waist, I could help Shaolin students not only to explode spiral force, such as in “Black Tiger Steals Heart”, but make their palm strikes powerful, realizing the Shaolin principle that the palm was more powerful than the fist.

The San Feng Wudang Set is a welcomed creation. It shortens the Wudang Taijiquan Set without missing its philosophy, spirit and nature. 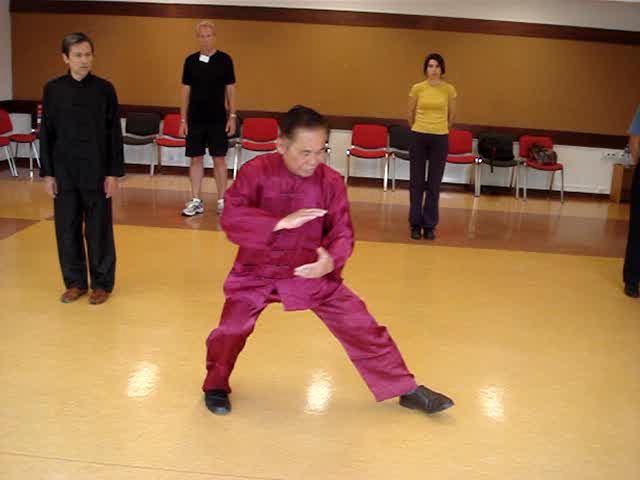 Rotating the waist is very important in Taijiquan