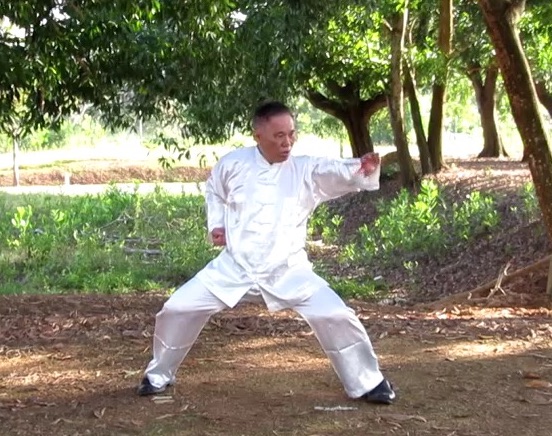 One was the famous Shaolin Elder, Pak Mei, of the Qing Dynasty. He was a kungfu genius, an all-rounder, but Cotton Palm was known to be one of his specialties, his other specialties were Child's Art, Golden Bell and dim mark specially with the phoenix-eye fist. It was reputed that if an opponent punched him, he would use his Cotton art to suck in the punch, then sent the opponent flying back many feet when he released the absorption.

The other Cotton Palm master was my second sifu, Sifu Chee Kim Thong, regarded during his lifetime as a living treasure of the People's Republic of China. I did not personally see him demonstrate the feats of Cotton Pam, but it was well known that an international martial art reporter who was also a Karate master chopped my sifu's head while my sifu sat in a Zen meditation posture.

A classmate also told me that once he accidentally entered my sifu's hotel room while they were traveling, and saw my sifu practicing his internal art. My sifu extinguished the flame of many candles except one in a line with a movement of his finger, then lighted up the candles again from the one burning candle with a reverse movement of his finger.

When I was learning from my first sifu, Uncle Righteousness, I learned a set of Cotton Palm from my sidai, or junior classmate, who learned it from another lineage, the Chin Woo Athletic Association, Penang, Malaysia. Later my sidai became the Grandmaster of Georgetown Chin Woo Association.

This Cotton Palm set, called Mien Chang in Chinese, is from Praying Mantis Kungfu. It is relatively "hard". I only learned the routine of the set, but not the art of Cotton Palm.

The benefits of Cotton Palm training are tremendous. Besides having powerful and flexible palms for combat, Cotton Palm contributes greatly to good health, vitality, longevity, peak performance and spiritual joys.