THE BENEFITS SHAOLIN PRACTITIONERS GET IN LEARNING TAI CHI CHUAN 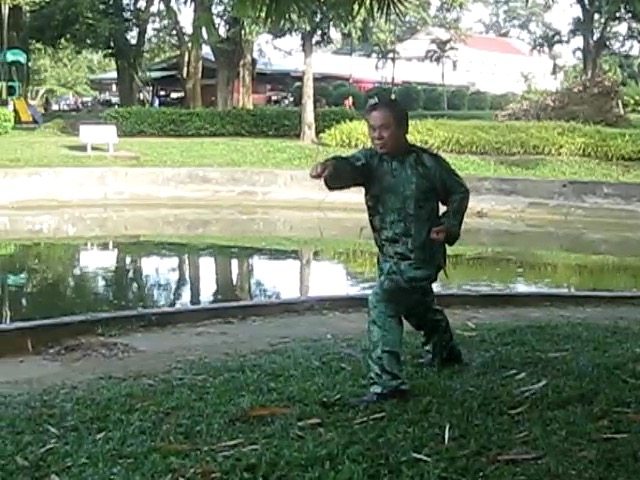 What are the benefits Shaolin practitioners can get from learning Tai Chi Chuan?

We can start with the two examples of waist rotation mentioned above.

Because of waist rotation and other typical Tai Chi Chuan movements, a Shaolin practitioner will be better able to use minimum force against maximum strength. This principle of minimum force against maximum strength is also found in Shaolin Kungfu, but is emphasized in Tai Chi Chuan, thus making the Shaolin practitioner more aware of it.

Hence, when an opponent executes a powerful punch at him, instead of warding it off with "Beauty Looks at Mirrow", which is a typical Shaolin response, he may use "Golden Dragon Plays with Water", which can deflect a similar punch with less force.

Waist rotation enables him to generate spiral force from his dan tian. When he executes a strike with his hand, instead of linear force flowing from his shoulder, now spiral force flows from his dan tian. This will speed up his attainment of exploding force from his palm. He may still attain this Shaolin skill if he has not learnt Tai Chi Chuan, but having learnt Tai Chi Chuan will enable him to attain it in shorter time.

Performing his Shaolin Kungfu slowly and gracefully enables him to round up his Shaolin movement and let it flow smoothly. If he performs the same movement in his normal way, it is often linear and staccato.

When his Shaolin movements flow smoothly, it helps him to generate energy flow. This will speed up the process of his internal force development. For example, because of this benefit form learning Tai Chi Chuan, when he performs Golden Bridge, which is a Shaolin force-development method, he will develop more force in shorter time.

Many Tai Chi Chuan principles, like "flowing with an opponent's momentum" and "starting later arriving earlier", which are found in most Tai Chi Chuan movements, will enable a Shaolin practitioner to enhance certain aspects of his Shaolin training. For example, if an opponent pushes at him, instead of resisting which an ordinary Shaolin practitioner would typically do, he may follow the opponent's pushing momentum and grip his arm using the Shaolin pattern, "Lead Horse Back to Stable".

Instead of rushing in with a Black Tiger, which an ordinary Shaolin practitioner would do, he may still move in but wait for his opponent to make a first attack, then brush aside the attack and simultaneously counter with a Black Tiger, implementing the principle of "starting later arriving earlier".

These useful principles can be applied in daily life. For example, instead of arguing with another person, like your boss, spouse or client, you can first follow his argument then turn it around on him or her. This is the principle of flowing with an opponent's momentum. Instead of accepting the first job or joining the first kungfu school that comes your way, you spend some time surveying the possibilities and only then take the best one available. This is starting later arriving earlier.

To sum up, Shaolin practitioners learning Tai Chi Chuan can have the following benefits

The above is taken from Question 2 October 2013 Part 1 of the Selection of Questions and Answers.