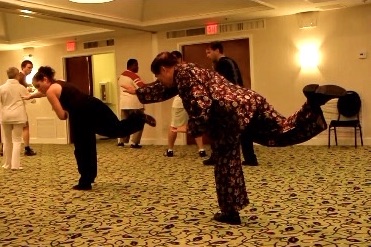 Let us take an example of rotating the waist. Waist rotation is a basic principle in Tai Chi Chuan, which means that any Tai Chi Chuan practitioner would know how to rotate his waist correctly when making a Tai Chi Chuan movement. If he does not know, it means that he has not been taught correctly.

On the other hand, waist rotation is not a basic principle in Shaolin Kungfu, which means that many Shaolin practitioners would not rotate their waist when making a Shaolin movement.

Why is it that Tai Chi practitioners have knee injuries and back pain but not Shaolin practitioners if they do not rotate their waist? It is because Tai Chi Chuan movements and Shaolin movements are different.

Actually all that is found in Tai Chi Chuan is also found in Shaolin Kungfu, but much of the material that concerns this question is usually found at an advanced stage. On the other hand, this material is found at the beginning of Tai Chi Chuan.

For example, waist rotation is not specially taught in Shaolin Kungfu until a practitioner has advanced enough to learn exploding internal force from his dan tian. At earlier stages he just uses physical strength. But as waist rotation is a basic principle in Tai Chi Chuan, which is applied in every Tai Chi Chuan movement, it is taught right at the beginning.

We are, of course, referring to genuine Shaolin Kungfu and genuine Tai Chi Chuan. If a person learns Tai Chi dance, he may not learn waist rotation regardless of how long he may have learnt. On the other hand, if a person learns from a school that teaches only external Shaolin Kungfu, which is the norm today, he will not have the opportunity to learn exploding internal force from the dan tian even if he has learnt for a long time.

The above is taken from Question 1 October 2013 Part 1 of the Selection of Questions and Answers.