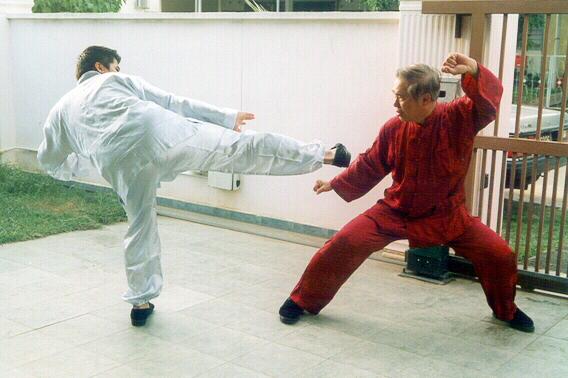 I will renew my practice of the 12 Wahnam Taijichuan combat sequences after having taken a break to learn the Cotton Palm Set.

You can first fight with mediocre Muay Thai fighters just to improve your skills of fighting. Gradually you can increase the levels of your opponents.

The 12 Wahnam Taijiquan combat sequences cover all forms of attack. Masters have classified all attacks into four main groups, namely striking, kicking, felling and chin-na (which is a special way of gripping).

Most martial arts, which are actually martial sports governed by safety rules, are incomplete. You cannot, for example, hit a boxer below his belt or behind his back. You cannot catch the leg of a Taekwondo exponent.

Hence, one needs to cross-train, i.e. train in many other martial arts, if he wants to be combat efficient. But he forgets that they are actually sports governed by safety rules.

In kungfu, any genuine types of kungfu, you don't have to cross-train. There are also no safety rules. If you are proficient in the 12 Wahnam Taijiquan combat sequences, you can handle any combatants.

Sifu, do I have an imprint from past-lives which effects my family relationships? I have always felt alone in my family-life growing up and also in the outside world. I don't know how to break my isolation.

How do we guard against the subconscious? While endeavouring always to have good thoughts, how do we avoid getting pulled in some direction by events materializing from thoughts which may not be beneficial?

Everyone has imprints from past lives. The imprints may surface when you are in a deep state of mind. But always have good thoughts, like enjoying yourself with your family.

Karma can be changed. Because of past karma, you may have a bad family relationship. But think of the good and happy times with your family. Thoughts are very important. They are the most important factor in deciding karma, the other two are speech and deeds.

It is not difficult to change your karma. If you feel lonely of your solitary existence, think of your happy family, and think of the girl you will meet, whom you must make her happy.

For example, if you meet someone who is sick, think that he will get well. If he gets worse, think that it is his karma, which may eventually work well for him.

Many chi kung and kungfu masters, for example, were sick before, but being sick eventually led them to become masters. A good example was the Venerable Hai Deng, who was the teacher of Sifu Yan Xin, whom I consider the greatest chi kung master alive today. The Venerable Hai Deng was so sick as a child that his parents named him "Wu Bin", which means "No Illness". 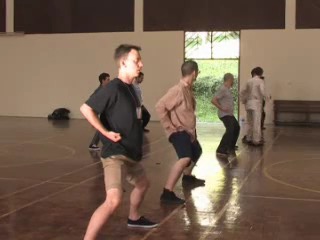 Regarding girls, I think after some introspective analysis, I was afraid of rejection for whatever reasons.

You have many benefits that others merely dream about. You have good health and vitality, and when you are old, you will have longevity. Sick people, especially those suffering from so-called incurable diseases, will give anything for good health.

When I was younger, at between 20 and 30, an auntie gave me some good advice. She said that girls could be easily won over. Actually, even in Western societies, girls have far less chance than boys to meet their partners. If you persist in your endeavour, which must of course be honorable, you will certainly win the girl you like.

The auntie advised that despite initial failures one must persist in his action if he wanted to succeed. Despite many years, I still remember her words. She advised that one must be "mien pei hou" which is in Cantonese Chinese, and which literally means "face-skin-thick", and can be translated as "thick-skinned" in English.

My auntie is one of the most beautiful women I have seen. I don't know about her romance, but her husband is not what I would say handsome. He must have "mien-pei-hou" during his courting.

A Wing Chun Kung Fu master from Hong Kong said many things that I found upsetting. Of course, out of politeness I did not mention anything to him at the time in order not to disturb his seminar which I attended.

He took many opportunities to disparage arts from Southern Shaolin (for example Hung Gar and Choy Lee Fut), while simultaneously saying that Wing Chun is superior to these other Southern Shaolin arts.

You may notice that I favour "Wing Choon" instead of "Wing Chun". It is a matter of opinion, and most people use "Wing Chun". 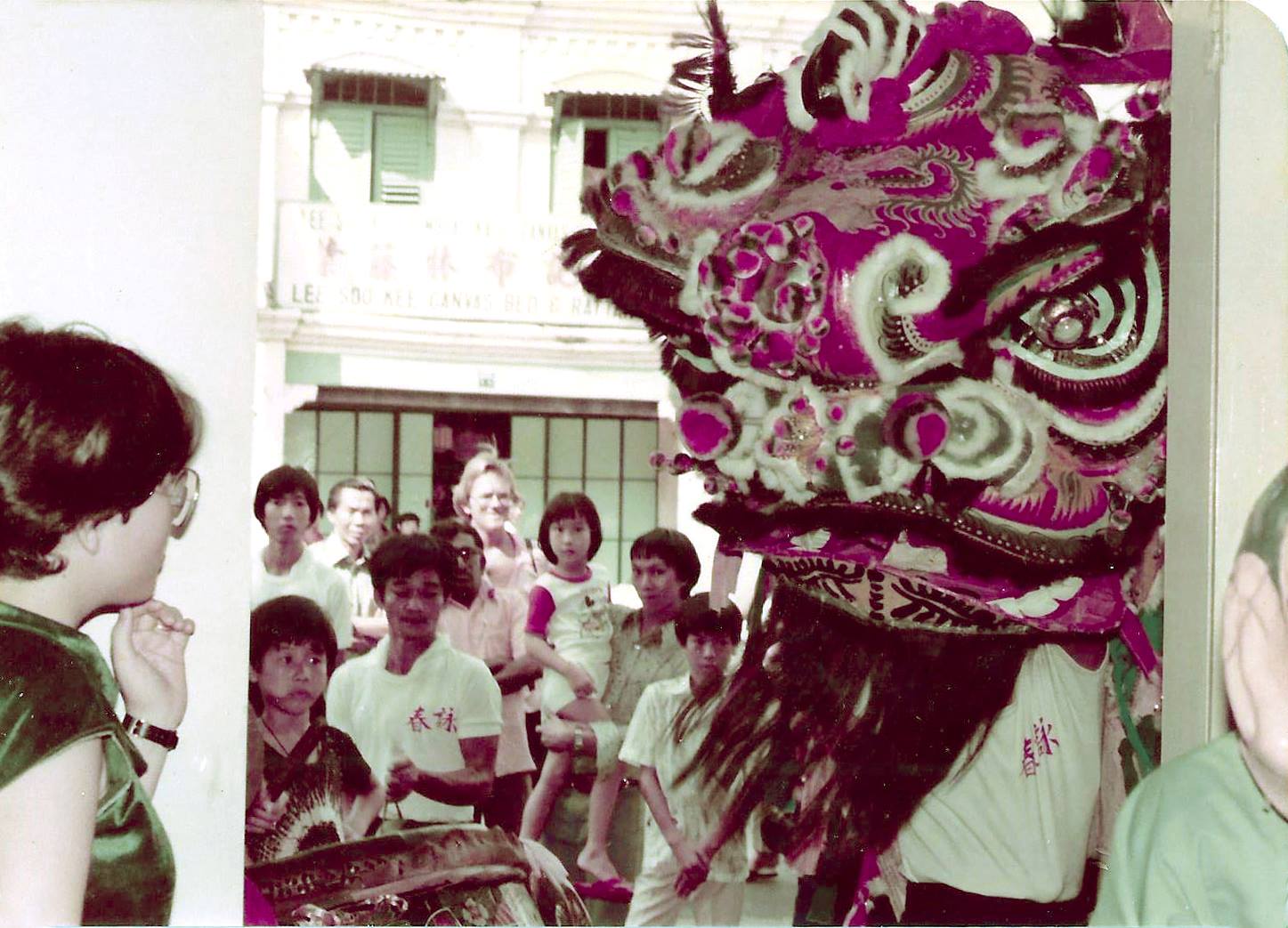 However, in specific conditions the Horse-Riding Stance may be used for fighting.

He said that Wing Chun principles are based on proven scientific principles whereas Southern Shaolin is not.

Kungfu evolved from actual fighting. If a person does not know its principles, it only means he does not know. Certainly it is not because the principles are not scientific proven.

Actually kungfu occurred long before science. There are many things in kungfu that science has not proven. For example, in Shaolin Wahnam just by flicking our fingers a few times, we can develop a lot of internal force. Modern science does not believe in internal force; it still believes in mass and motion, i.e. the bigger the mass, or the faster the motion, the more force it has.

But we in Shaolin Wahnam know that internal force contributes much to our daily living. We know from direct experience. 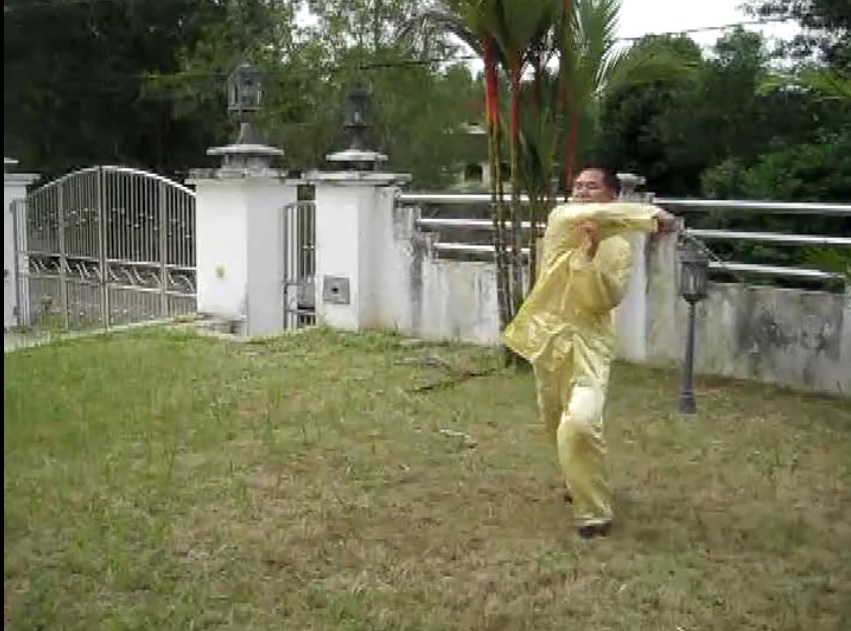 Whether to face the opponents face on or side on depends on numerous factors, which I believe the Wing Choon master does not know. There are patterns in Wing Choon Kungfu where a practitioner faces his opponents side on, for example in "bong sau" or guard-hand, "chiet cheong" or chop-palm, and "pak sau" or "slap palm".

He said that Southern Shaolin practitioners attempt to make money from unsuspecting members of the public by performing lion dance. He said that Wing Chun does not waste time with Lion Dance. They do not like Lion Dance as it's only for vanity and showing off and making money.

Many principles from Lion Dance can be applied to kungfu. For example, a Lion, while being majestic, is also very careful. It tests pillars and thresholds before entering a hall or a room. This is particularly helpful when many combatants exchange blows generously.

A Lion shares his treasure with the public. This is helpful when many kungfu practitioners practice kungfu not for fighting but as a hobby.

Lion Dance is not only agile but also demanding. It is excellent for training internal force.

Many years ago I taught Lion Dance at the Wing Choon School of Patriarch Choe Hoong Choy.

He said that Southern Shaolin has too many weapons which are only to please spectators and not of practical use, whereas Wing Chun only has two weapons and they are not for show but rather are practical in use.

The master probably does not know that Leong Chan, known as Wing Choon King during his time, fought his way out of an ambush with a soft-whip.