What are the best fundamental flowing force and consolidating force methods to teach beginners?

Cloud Hands and Lifting Water (from 108-Pattern Yang Style Set) are excellent methods to teach flowing force, and Single Dragon Emerges from Sea (from Triple Stretch) and Double Dragons Emerge from Sea (from Dragon-Tiger) are excellent for teaching consolidating force to both beginners and advanced practitioners.

Is this also true for internal force training?

What does that mean about how much time I should spend on them getting the form correct versus 'enjoying themselves' with a technique like Cloud Hands?

Is the balance different for flowing and consolidating force methods?

Yes, the same proportion applies to force training too. The time spent is the same.

The proportion, or balance, is the same for flowing force and consolidating force. 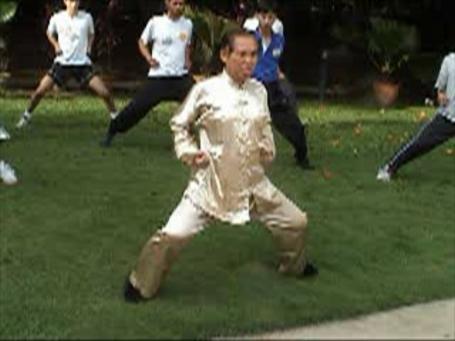 Is it important to include a static force training method for beginners?

It is not necessary but important to include static force training for both beginners and advanced students if they practice kungfu. If they do not practice kungfu, it is not important but helpful to speed up their force development if practiced correctly.

Examples of static force training are the stances, like the Horse-Riding Stance and the Three-Circle Stance. Examples of flowing force training is practicing any dynamic chi kung exercise, like Lifting the Sky and Cloud Hands.

Static force training increases internal force rapidly. It is for this reason that all kungfu training, including Taijiquan and Baguazhang, starts with stances. But modern kungfu practitioners do away with stance training. They probably do not realize this fact.

If it is not necessary to develop much internal force, flowing force training can replace static force training. This is the reason why chi kung practitioners need not practice stances.

Is there a difference between developing flowing and consolidated force and building internal force?

In Yang Style Taijiquan it is 100% flowing, and in Horse-Riding Stance it is 100% consolidated. Although Iron Wire uses movement, the force is also 100% consolidated in the orthodox method. The movement is physical and not flowing energy. However, because we know chi flow, we are able to perform Iron Wire with some flowing force. 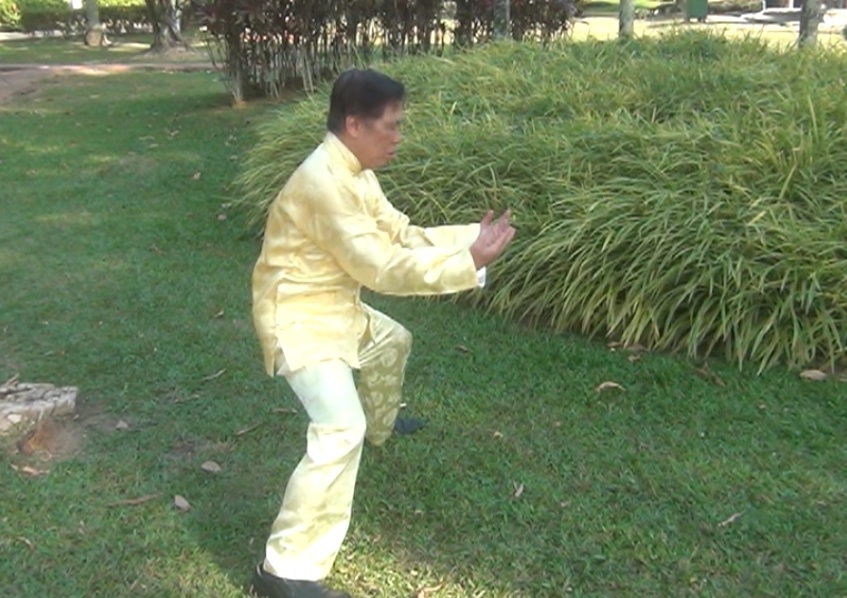 I noticed in the Dragon Strength Set, in the force building section there, it appears you have a slightly rounded back. I wanted to ask three questions:

Yes, your seeing my slightly rounded back was correct. It was spontaneous.

The rounding of my back facilitated better flow of chi.

The rounding of the back is spontaneous. It occurs as a result of powerful chi flow. There are no specific sections in the Taming Tiger Set, or any set, to purposely round the back.

Nevertheless, the rounding of the back may occur more readily in some patterns than in others. For example, at the start of the set after the greeting, when a practitioner lowers his two taming-hands while on a Horse-riding Stance, his back may be rounded due to strong chi flow from his back to his palms.

Over the past few days, I did not feel much third eye activity after practice. All of a sudden between yesterday and today, there has been slight pain and consistent pressure in the middle of my forehead. In fact, it has been so persistent throughout the day that I feel somewhat nauseous at work.

I have been trying to focus at my dan tian but that seems to make the third eye pressure worse.

Does Sigung have any advice to deal with this temporary discomfort?

Congratulations, it is an indication that your third eye is opening. Yours are characteristics of the opening of the third eye.

If the pain is tolerable, let it be. It is a little price to pay. If it is very painful, enjoy a gentle chi flow.

What is most important is that you must never abuse the amazing benefits of the third eye. 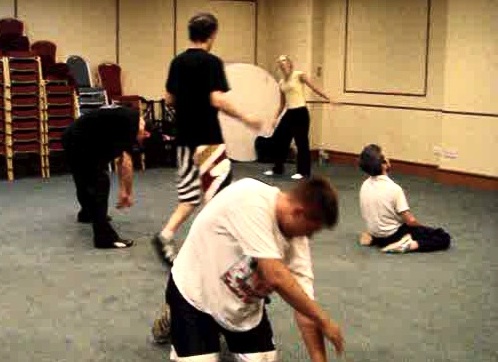 Chi flow after some kungfu performance

Sifu, have you ever heard of Hao Tang Lang Quan? It is a style of Kung Fu which I found here but I don't know if it is a good style and I haven't met the teacher yet.

Why is there more chi flow developed in kungfu training than in chi kung training?

It is because more energy is generated in kungfu training than in chi kung training.

The chi flow movements in our kungfu classes are vigorous, sometimes hilarious. An uninitiated observer could be excused if he thought he had entered a zoo when he came into our kungfu class.

Another reason why our kungfu practitioners have more vigorous chi flow movements than our chi kung practitioners is that the former are free from inhibition, whereas the latter, especially beginners, are inhibited and therefore do not let themselves go freely.

It is worthy of note that in our school, kungfu is chi kung. In other words when our Shaolin or Taijiquan practitioners perform their kungfu sets, combat sequences, force training or engage in free sparring, they train energy and experience chi flow. Nevertheless, here we use the terms "kungfu" and "chi lung" as what the general public conceptualize the terms to be. Hence, in this context, chi kung training refers to practitioners performing exercises like Eighteen Jewels, Eighteen Lohan Hands, and Bone Marrow Cleansing.