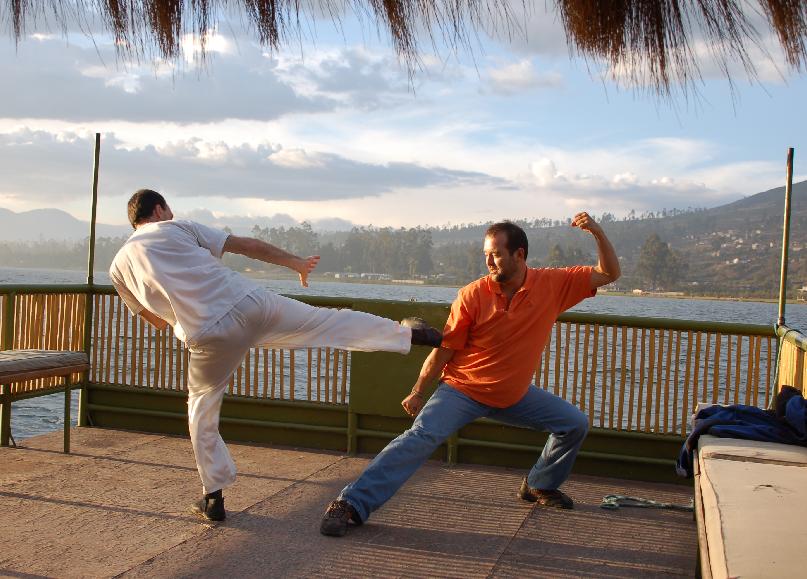 I have checked out your website. I love your videos and demonstrations of you and your students performing Southern Shaolin forms. I have noticed one particular thing about your teachings. It makes a lot more sense.

Those of us who have practiced real kung fu know that it is a lot of hard work, but it does not resemble the supposed kung fu that one sees in most schools or videos.

In real kung fu, as can be seen in your videos, practitioners are sure of their movements and do not bounce around. They do not attack senselessly. The movements are efficient and the footwork is always there and noticeable. It is so nice to see real kung fu again.

Your observation of kungfu today is revealing. Indeed, it is saddening to see most kungfu practitioners today throw away their stances and bounce around, and throw away their own safety and attack senselessly.

I clearly remember that when I first learned kungfu at the age of 10, many people said to me, "Boy, you are lucky to have a chance to learn kungfu. Don't forget to practice your stances. Stances are very important." These people did not practice kungfu themselves, yet they emphasized the importance of stances.

I also remember clearly that all my sifus reminded me to ensure my safety first, not only when I attacked but in all kungfu movements. If I lfted my arm a bit high, for example, my sifu would reprimand, "Don't expose yourself!" Now it is shocking to see martial artists move in to attack with total disregard of their own safety.

It is shocking that many martial artists today do not realize they are not getting the benefits they set out to achieve despite years of dedicated practice. Why do people practice a martial art? There are two main reasons, to be able to defend themselves, and to be healthy.

Most martial artists today cannot defend themselves! This may come as a big surprise to many people. Some martial artists are good at hitting people, especially their classmates, but most of them will be hit too in free sparring. In fact, the ability of self-defence has been lost to such an extent that some instructors tell their students that if they cannot withstand a few punches and kicks, how could they practice a martial art! This is ridiculous. The very reason anyone practices a martial art is not to be hit at all.

Instead of getting good health, most martial artists today are becoming more and more unhealthy as a direct result of their martial art training! Most of them are often in pain and are stressful. They have sustained a lot of internal injuries in free sparring that are routinely left unattended to. Even if they don't enage themselves in free sparring, the way they train causes a lot of energy blockage which is detrimental to health.

This is not OK. If you recall, at the Finale Ligure course, I strongly warned against over-trainig. I explained that different schools had different ways of practicing, but in our school practicing for just about 15 minutes a session, two sessions a day is more than sufficient.

I even went to the extent of saying that for those who were lazy, even one session of 15 minutes a day was enough. Practicing for an hour is over-training, and can be harmful.

Why is this so? It is because our chi kung is high-level and our method is cost-effective. As I have often mentioned, other people may not believe this fact, and some may become angry at what I have just said, but that is their problem, not ours.

It is the same in daily life. If you have a high-income job and you are cost-effective, you earn more working half an hour a day in six months than many people working the whole day at low-income jobs for three years. 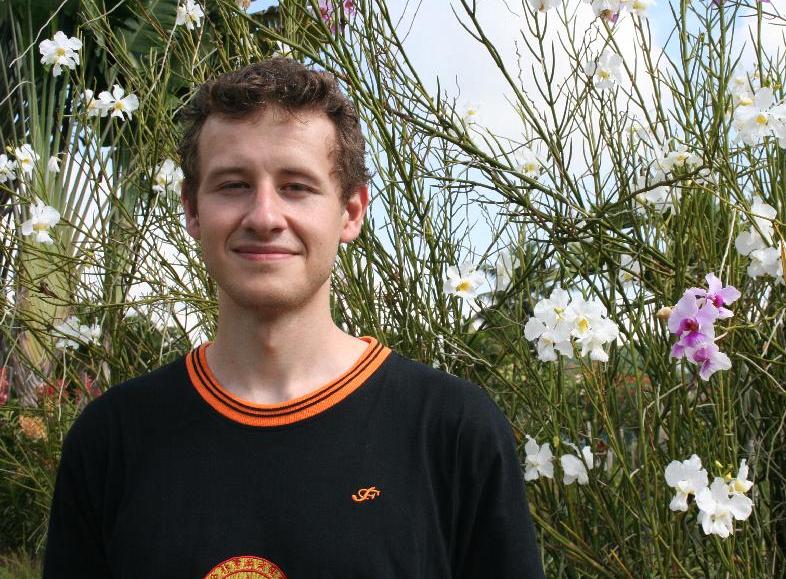 Practicing genuine kungfu should make you healthy, peaceful and happy

During these 6 months I have had a variety of spontaneous movements, which I suppose are due to chi flow. In general I naturally kept one (or more than one) for some weeks and then new one(s) took the place.

It is difficult for me describing these movements. In general they all involve the vertebral column and the hip. For example, in the one that appeared few days ago, movements were along the Ren and Du Meridians, which made the hips move and drove the feet inwards more and more.

In the previous manifestation movement was also linked to the Ren and Du Meridians and induced to bend the legs till the floor and squat. All these were accompanied with a noisy breathing or emission of sounds.

Sometimes I perspire a great deal during the practice, other times not so much.

You don't have to worry about the different types of energy flow as a result of your chi kung practice. This is following the first golden rule of practice, namely "Don't Worry".

You need not wonder why you have different chi flows. This is following the second golden rule of practice, namely "Don't Intellectualize".

This will lead you to the thrid golden rule of practice, namely "Enjoy your Practice". Obviously, if you worry and intellectualize, you won't enjoy your practice.

But for your intellectual curiosity, I shall explain why you have had different types of energy flow. It is due to various variables, especially the type of exercise you perform, your needs, and your thoughts. For example, if other factors were equal, when you have a back problem, the energy flow would flow to your back, when you have a knee problem, it would flow to your knees.

But you need not worry about where the energy would flow, or intellectualize on why it would flow there. Just relax and enjoy your practice. It is a natural characteristic of energy to flow to where it is needed most.

Congratulations. This is a good indication of your progress. 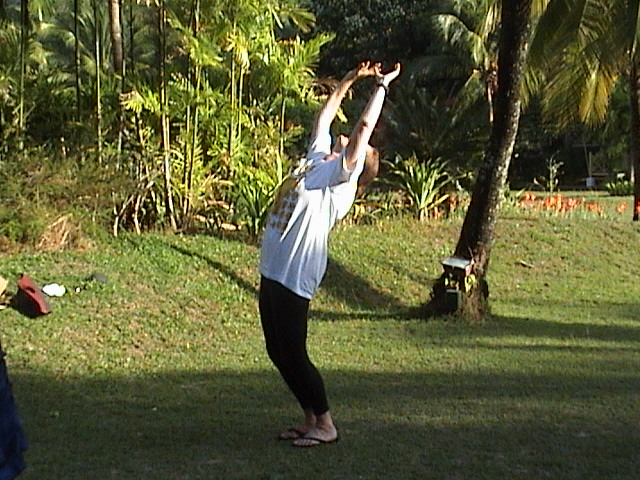 My problems are not only related to the knees but also to the hip joint. An analysis by magnetic resonance (about three years ago) showed that I suffered from beginning arthritis at the hip joint.

In fact in the last years I had several events of joint block at this site during which time I had to stop my Tai Chi practice learnt form another school, and walked with difficulty and great pain. Only acupuncture could remove the block and the inflammation. Significantly since I began Wahnam Chi Kung practice and stopped Tai Chi (June 2010 onward), this crippling blocks did not recur any more.

Moreover my hip changed its posture in that it is rotated onwards which is pleasing for me. These are encouraging effects but it remains that sometimes I have some diffuse pain when I walk on the back of the hip joint which appears for example after being seated for long time or also without apparent motive.

This type of pain is not crippling. How do I interpret all this? I remember your teaching: that recovery through chi kung can be a long process during which pain may appear in the diseased part as rubbish is eliminated from inside.

Let us play a game called "Let's Suppose". Let's suppose that there is a miraculous art. Irrespective of what health problems you may have, if you practice the art according to its rules, you will overcome all your health problems within a reasonable time, generally about nine months to a year.

Actually now you have learnt this miraculous art. It is Shaolin Cosmos Chi Kung taught in Shaolin Wahnam. If you take some effort to check, you will find that there are many, many people who have recovered from their previously so-called incurable diseases by practicing our chi kung.

The rules are simple. There are only three rules. One, don't worry. Two, don't intellectualize. Three, enjoy your practice. Of course you have to practice to enjoy it. And you practice just 15 minutes a session, twice a day.

Can I hope for a full recovery? Can chi kung be effective for the recovery of arthritis?

Of course you can recover fully -- if you follow the rules. 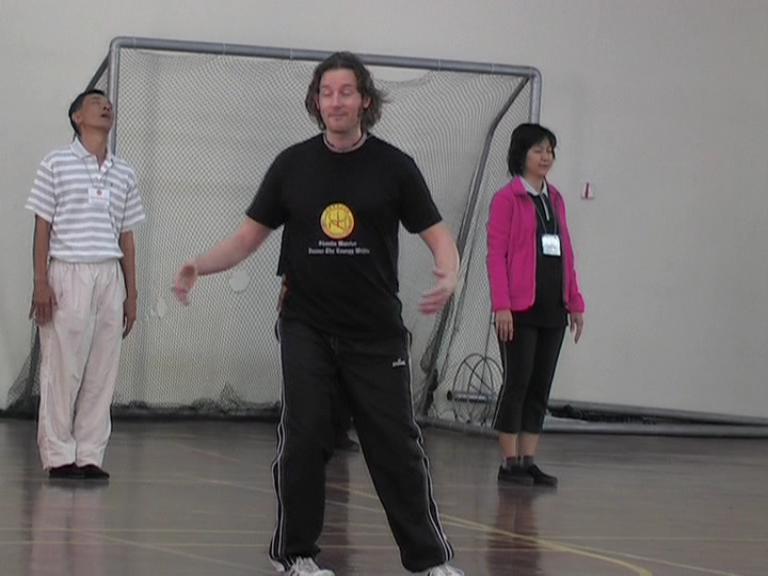 I also have two disc protrusions (not hernias) in the lumbar region which provoked me pain. This pain progressively disappeared in these last months. I suppose this is another benefit of chi kung practice I also suffer with a chronic thyroiditis, although not a severe form.

Perhaps you can indicate how to correct my practice or you can advise some chi kung exercises particularly suited for the above problems.

Don't try to be smarter than me. I have told you many times at the course as well as elsewhere that it does not matter what health problems you may have, but by practicing our chi kung according to the way I have taught you, you can overcome your problems.

As an analogy, it does not matter what economic problems you may have. If you can increase your cash flow remarkably, you can overcome your problems. If you like, read my article, Chi Flow and Cash Flow, for more details.

I have read your book "The Art of Chi Kung". In this book, in some case histories, it is reported that recovery from some diseases necessitates the direct intervention of a chi kung master for chi transmission and opening of energy channels. Do you think this is necessary in my case for a complete recovery?

If you like, you can arrange to have a personal consultation with me to have your blockage opened by me.

I normally do not give personal consultations nowadays because it is usually not necessary. And in your case, it is not necessary. You can overcome your health problems if you practice the chi kung you have learnt. It is important to follow the three golden rules of practice. It is also helpful if you take some courses again when I visit Finale Ligure in May.