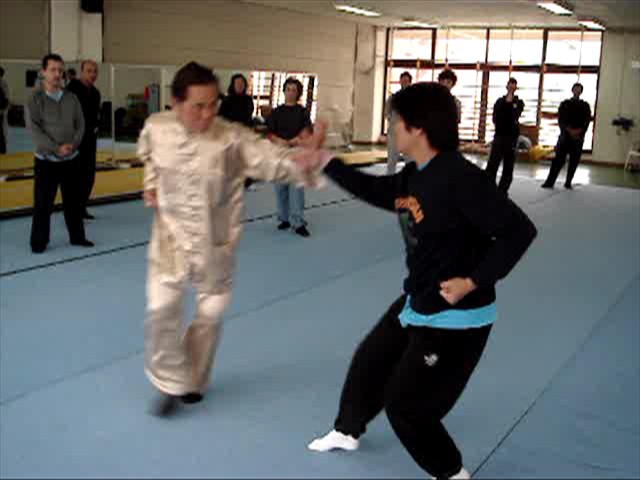 Please could you elaborate on the principles of "Gates" and meanings like Inside, Outside, Upper, Lower; and the rules regarding the use of them?

A general rule or principle is that if you are strong, you go through the central gate. For example, if your opponent attacks with a right "Black Tiger", you ward off the right attack with your left "Single Tiger", and counter-strike with your right "Black Tiger" to his solar plexus, as in our Combat Sequence 1.

If you are weaker than your opponent, you use a side gate. If your opponent attacks with a right "Black Tiger", you ward off with a right "Single Tiger", and counter-strike with your left "Dark Dragon" to his ribs, as in our Combat Sequence 5.

A Boxer habitually protects his top and middle levels well. Therefore, attacking his bottom level, that is hitting him below the belt, gives us a tactical advantage. Of course, we do not need to squat down to strike him. We can feint a top attack, then kick his shin.

Could you please elaborate on the principles of the Centre-Line, including Centre to Centre, Inside to Outside, and Outside to Inside.

The centre-line, or "choong seen", runs centrally from the crown of the head through the solar plexus to the external sex organs. The centre-line concept is related to, but not the same as, the concept of the central and side gates.

These concepts are meant to help us to be more combat-effective. They should not restrict us, enslaving us into rigid classification.

I recall that some years ago a Wing Choon practitioner consulted me on "tan sau" or "mirror-hand". He was taught that he must maintain the centre-line concept at all cost.

For example, to execute a right "tan sau", he placed his right palm (with the open palm facing skyward) at his solar plexus and moved it diagonally forward to his right side, but it must not pass his centre-line. To avoid his palm ever be on the left side of his body, he even pointed the fingers of his right palm straight forward, which made him quite awkward, instead of letting the fingers point diagonally to his left.

When I asked him why he made such an obviously awkward movement, he replied that it was to conform to the principle of moving from the centre-line to the right side, which was what the right "tan sau" movement was supposed to be. I told him that he had become a slave to the concept, which he didn't understand too, instead of applying the concept to be more combat effective.

I demonstrated to him that if an opponent attacked him with a right thrust punch to his face or chest, his "tan sau" which was supposed to defend against this form of attack, would be ineffective if he kept rigidly to the centre-line to right concept. But if he just moved his right palm slightly to his left side before executing the same movement, which would result in his palm passing his centre-line, he could easily ward of the attack.

Surprised at the big difference due to only a small change, he asked me whether the "tan sau" movement was still conforming to the centre-line to right principle. I told him that it didn’t matter; what was important was that it effectively defended against the attack. In this case, the movement was from left to centre-line or to right. But if he rotated his waist slightly to his left before making the movement, it could be from centre-line to right.

You must bear in mind that experience comes before principle when you attempt to devise a simplified formula. More importantly, the formula is meant to help us, not to enslave us.

In the examples above, irrespective of whether the "tan sau" movement was from centre-line to right or from left to centre-line, it was from outside to intside. It was also entering from a side gate.

But if the opponent attacked with his left hand, the same movements, again irrespective of whether the right "tan sau" was from centre-line to right or from left to centre-line, would be from inside to outside. It would be entering from the central gate. 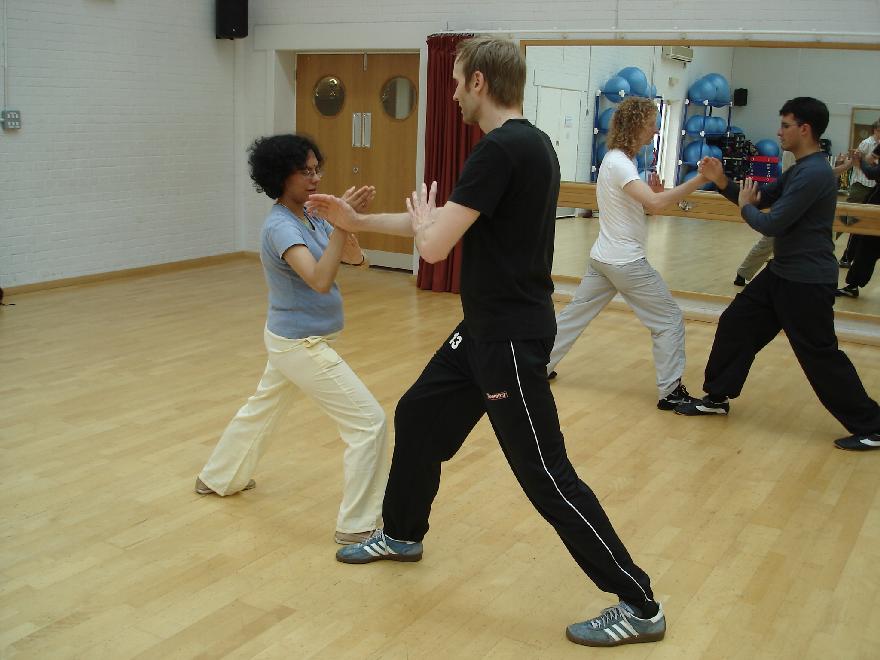 Priya, though much smaller in size, effectively uses a "mirrow-hand" at a side gate to ward of the attack of a much bigger-sized opponent

If one is a Shaolin 5th degree kong fu black belt, is he or she a Shaolin for life? Can a student choose not to be Shaolin practitioner once his or her master has passed from his physical being into the spirit world?

Firstly, there is no such a title as a Shaolin 5th degree kungfu black belt.

Unlike in Karate, Judo and Taekwondo, there is no belt-ranking system in traditional kungfu, including Shaolin.

However, some modern teachers teaching kungfu may introduce the belt-ranking system into their schools. Usually these schools teach some modernized forms of kungfu which resemble more of Karate or Taekwondo.

I was searching for a martial art that I could practice but not any martial art, one with the guidance of a true master, developing through intense training and concentration, and one that stays true to its original tradition and not tampered with Western influence.

Yours is an admirable statement.

If more martial artists pay attention to the four points you have mentioned in the statement above, they would have saved a lot of time and avoided a lot of harm!

Yes, one should not practice just any martial art, but choose one that will fulfil his needs and aspirations. Most people practice a martial art because they want to be healthy and to be able to defend themselves. But most of them end up being more unhealthy than when they started, and being unable to defend themselves to the extent that they regard (wrongly) sustaining punches and kicks as part of their training.

A student should seek the guidance of a true master, not just any instructor who himself has little knowledge and poor performance in the art.

One does not merely study a martial art, he practices it His development calls for much dedicated training and focus, without which he will never be proficient in his art even if he knows a lot of theory about it. 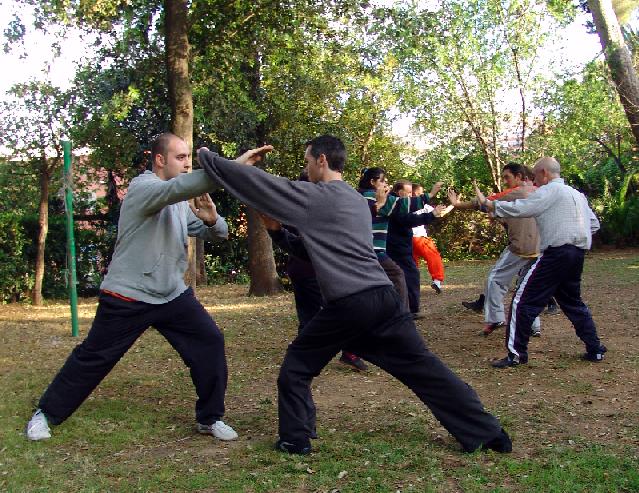 I aspire to becoming a great football player one day and I train myself each day to achieve that dream. I believe that a martial art could help me enhance my skills not only for football but also for self-defense and defense of younger ones, for a more clear and decided mind. One of my favorite subjects is qi or as I saw on your webpage chi kung.

The Shaolin Kungfu and Wahnam Taijiquan we teach in our school, which are very different from those taught in most other schools, are excellent for building great footballers or other sportsmen and women. Our crucial contribution is the training of qi, or chi kung, which will develop internal force and mental clarity.

With internal force, amongst other benefits, a top-class footballer or any sportsman (or woman) can be engaged in vigorous activities for more than an hour without feeling tired or panting for breaths. Should he sustains any injuries, using eneregy flow, he can recover at least two or three times faster. With mental clarity, he can see his opponents' movements clearly, and make wise decisions spontaneously.

As I saw the great variety of martial arts and their modern aspects (inadequate Western masters and low-class schools without proper formation) I knew it would take time to find a great and true art. I finally found your webpage and after careful reading I saw in you a great and true master with perfect and detailed knowledge of your art and its different aspects.

Thank you for your kind words about me and my school. We love our art so much that we do not want it to be lost to posterity. Therefore we are very happy to share its wonderful benefits with deserving people. 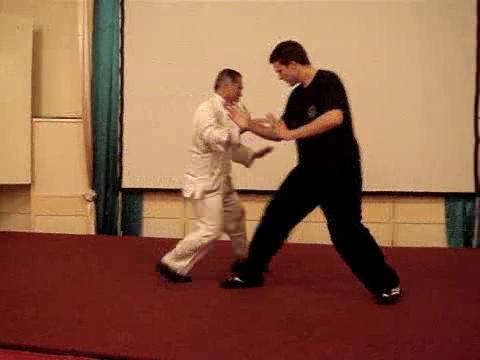 Yin-yang harmony is very important in Taijiquan and in life. A manifestation of yin-yang harmony as demonstrated here is he harmony of skills and techniques in this combat application

I train everyday from 5:00 to 7:00 a.m. in a field outside my town. I do normal football training (jogging, playing with the ball, sprints, push-ups, sit-ups, etc) but I also sit down in a meditative state so I can clear my mind.

I search to relax my body and breathe deeply but I was hoping also that I could enhance my senses doing this. I try to feel my surroundings (the wind blowing, the trees, the birds) with my eyes closed. My hearing and smell become more alert and hence more developed.

For someone devising a training programme on his own,.yours is an exvellent one. Congratulations for your good sense and judgment.

There are a few important points you have done, and which I would like to highlight

For success in any art, regular training is necessary. You have done well in this respect by training from 5 to 7 every morning.

For healthy progress, yin-yang harmony is highly recommended. This you have done well by balancing vigorous physical activities with mental relaxation.

You may not realize it but you also have yin-yang harmony in balancing skills and techniques. You not only train football techniques but also improve the skills in performing them by relaxing your body, deepening your breathing and enhancing your senses. Not many people realize the tremendous advantages in improving skills.

Though you may not have defined them consciously, you also have paid much attention to two very important factors for success in any sports, namely relaxation and mind. Many people pay attention only to techniques and physical prowess, but do not realize that frequently the factors that set champions apart from ordinary participants are the ability to relax and the presence of mind in highly combative situations. When you are relaxed, you are able to perform your best. When you have presence of mind, you aim for excellence.

I try to feel the energy from different beings around me ( plants, trees, animals, etc) and thus hoping to enhance the sense to feel the chi. I try also to feel the energy of my own body and at first I tried concentrating it in my hand to see if I could really control it. When I do this I feel my hand getting warmer and it becomes red. I also tried to gain energy in this meditative state from my surroundings.

What you do here is of an advanced level. It is a double-edged method. If you perform correctly, you have very good results. But if you perform wrongly, the adverse effects can be serious. As you don't have the personal guidance of a master, it is not advisable to attempt this high-level method. It is not worth the risk.

Editorial Note Andreas' other questions will be posted in the Question-Answer Series October 2009 Part 3 issue.