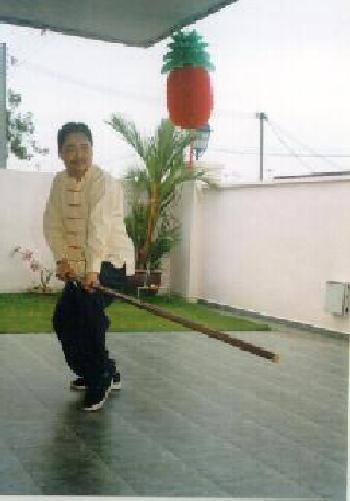 I have bought Sifu Wong's book, “The Art of Chi Kung”. I think it is a wonderful book about chi kung. Thank you very much for sharing the wonderful art of chi kung to people in general. I have a few questions about some of the chi kung exercises.

In Abdominal Breathing and Reverse Breathing, we perform both breathing in and breathing out. When an ordinary person breathes in, both good chi and bad chi flow in, but the amount of good chi is more. When he breathes out, both good chi and bad chi flow out, but the amount of bad chi is more. A chi kung practitioner enhances this natural breathing process by using appropriate breathing techniques and methods, such as Abdominal Breathing and Reversed Breathing. In other words, the proportion of good chi to bad chi while breathing in, and the proportion of bad chi to good chi while breathing out are greater. Hence he is more efficient than ordinary people in this respiratory process as well as in other physiological processes.

It is very important — I repeat, it is very important that this must be done gently, and that you must not intellectualize. You need not do this every time you breathe. In ten breathes, it is sufficient to think of the process gently about two or three times.

This does not necessarily mean that only Reserve Breathing is used in Taijiquan. Most schools use spontaneous breathing, many schools use Reversed Breathing, some use Abdominal Breathing, and a few, like ours, use whatever mode of breathing is best for the occasion.

For example, in Wahnam Taijiquan as well as Shaolin Kungfu, when we first learn some forms, we do not worry about our breathing, we just breathe spontaneously. Later, if we wish to conserve our energy for a long series of many movements, we use Abdominal Breathing. If we wish to strike with internal force, we use Reverse Breathing.

In “Nourishing Kidneys” you say to visualize chi at one's lao gong (centre of palms). Do you mean to simply visualize energy at the lao gong or do you mean to send the chi we had already sent to bai hui to the lao gong? When I breathe in when I'm raising I feel chi from my breathing flowing to my hands. Is this correct?

When doing “Pushing Mountains” you say that when pushing out to visualize chi flowing from the back to one's palms. Should one simply visualize the chi coming or should we visualize it coming from a specific point like from qihai?

As explained in the answer above, if it is necessary for you to visualize the chi coming from a specific point, it will be mentioned in the instruction. If it is not mentioned, that means you need not, and should not, do it or worry about it. 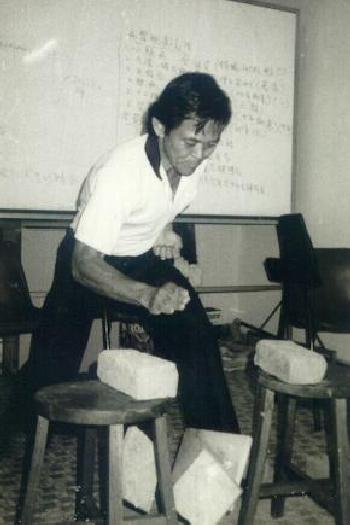 What should I do after I have developed the Cosmos Palm to break a brick? Channel chi into my relaxed palm to break the brick?

You should strike your Cosmos Palm on a brick to confirm that you could break a brick and not your hand. It would be helpful to choose a soft brick to start with to gain confidence. Gradually you can progress to harder bricks.

Yes, you channel your chi to your palm for the brick breaking. Your arm is relaxed but your palm is terse, due to your chi consolidated there. If your palm is relaxed, your flowing chi may not be sufficient to break the brick. This does not mean you tense the muscles of your palm.

Striking an opponent is different from breaking a brick. When a Cosmos Palm master strikes a person, it is not the momentum of his palm, but his flowing chi channeled by him into the opponent that causes serious injury. The master's chi distorts the energy network of the opponent, which results in upsetting the normal working of the person's organs or system. There may not be any external mark on the point of contact, yet the opponent can be seriously injured. Hence, the palm of a Cosmos Palm master may be soft and gentle, and he may be unable to break a brick, but he can cause serious damage to an opponent.

I am a Taijiquan practitioner and am capable of using fa-jing to send my opponents fly away with a palm strike. My desire is to learn Cosmos Palm as an addition to my other energy skills.

You have to learn it from a master who is willing to teach you. Of course, Cosmos Palm is not just for sending an opponent flying away. It can be used for healing, and it gives the exponent radiant health.

Is the fa jing (striking force) of Taijiquan equal or related to the Cosmos Palm? Can it also cause internal injury when used on ordinary people?

“Fa-jing” or explode force refers to techniques, whereas Cosmos Palm refers to force. One can use other forms of force, such as dan tian force and Small Universe, to “fa-jing”. On the other hand, besides being used for “fa-jing”, Cosmos Palm can be used for other purposes, such as opening energy blockage and massaging internal organs.

“Fa-jing” using Cosmos Palm or other forms of force normally can cause internal injury on ordinary people. But the “fa-jing” of ordinary Taijiquan practitioners, who usually use dan tian force, and the “fa-jing” of Iron Palm practitioners normally have no harmful effect on masters with Iron Shirt or Golden Bell. However Cosmos Palm masters as well as powerful Taijiquan masters and powerful Iron Palm masters may cause damage to Iron Shirt or even Golden Bell masters.

What is the skill that Shaolin fighters use to hit two bricks on top of one another and to break only the one at the bottom?

This art is called “Kak San Ta Ngow”, which literally means “Striking a Buffalo Beyond a Mountain”. The two skills involved are mental focus and internal force. 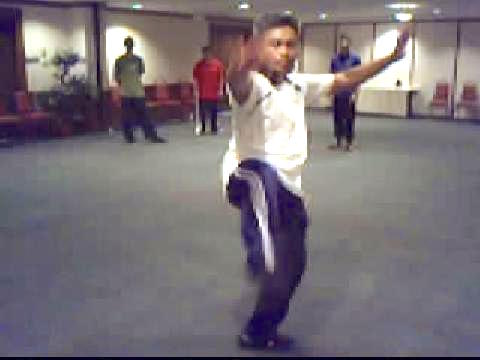 Joko using chi flow instead of muscles to perform a Taijiquan set at the Intensive Taijiquan Course of January 2006 in Malaysia. A video clip showing this performance will be released later.

I have learned fa-jing and da-jing in my Taijiquan training. Do your Taijiquan students learn more energy techniques besides these two?

Advanced students deepen these basic skills. They also learn advanced skills like using their energy flow (instead of muscles) to direct physical movements, and radiating their energy from their dan tian to merge with the Cosmos.

I had been researching the San Soo (Choi Li Ho Fut Hung) history for many years, and had just came across your Q/A in your website regarding the topic. I had found that my grandmaster trained under the Hung Sing Choy Lee Fut teacher Chan Sai Hung for a short time. So I believed that there's where four of the five words Choi Li Fut Hung came from. The only remaining “Ho” has always been the missing piece for the whole picture. You mentioned the “Ho” family could have come from Lan Tau Ho. Can you please share more about him?

Lan Tau Ho was a famous Shaolin master living about a hundred years ago in Guangdong in South China. “Lan Tau Ho” was actually his nickname, which means “Ho with a Sore Head”.

Lan Tau Ho's best arts were the Flowing Water Staff and the Tiger-Tail Kick. Once while he was sparring with his sifu using staffs, he was hit on his head by his sifu with the pattern called “Phoenix Dots Head”, which caused a sore. For some odd reason, this sore never healed, which led to his nickname.

It is interesting that the techniques in the Flowing Water Staff is very similar to those in the famous Six-and-Half-Point Staff (Lok Tim Phun Khuan) of Wing Choon Kungfu. It shouldn't be a surprise when we know that both sets came from the Venerable Chee Seen, the First Patriarch of Southern Shaolin. Chee Seen taught the same staff set to Sam Tuck and Leong Yi Tai, which are passed down to posterity as Flowing Water Staff and Six-and-Half-Point Staff respective. It is illuminating that the Six-and-Half-Point Staff is perfromed mainly in the wide Bow-Arrow Stance and False-Leg Stance, and not in the narrow Four-Six Stance characteristic of the fundamental Wing Choon set, Siu Lin Tau.

There was also another interesting story about Lan Tau Ho's Tiger-Tail Kick. His inner-chamber disciple, Thong Ka Lok, was dying to learn it, but his sifu did not teach him.

“I've got it,” Thong Ka Lok murmured weakly as he took out his mask to reveal who he was. It took Lan Tau Ho many days of Shaolin medical treatment to nurture Thong Ka Lok back to health.