GREAT KUNGFU IS A PROCESS OF SPIRITUAL CULTIVATION 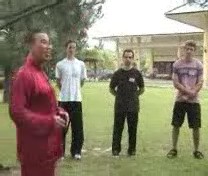 Great Kungfu is a Process of Spiritual Cultivation

It is fashionable for many martial artists today to say that their training involves spiritual cultivation. Even when their art is explicitly brutal and aggressive, they would still call it spiritual! Indeed it is hard to imagine how an art can be spiritual when the sole aim of its practitioners is to cause as much hurt to their opponents, often in a barbaric manner.

But what is spiritual cultivation? The meaning is actually straight-forward. It means the cultivation of the spirit.

Genuine traditional Shaolin Kungfu and genuine traditional Taijiquan are a class apart from all other martial arts, because originally they were practiced for spiritual cultivation, whereas all other martial arts were originally practiced for combat. When Bodhidharma first taught Shaolin Eighteen Lohan Hands, which later developed into Shaolin Kungfu, to Shaolin monks, it was to help them attain Enlightenment. When Zhang San Feng first taught Wudang Kungfu, which later developed into Taijiquan, to Taoist priests, it was to help them attain the Tao.

The video clips here and elsewhere in these series show some lessons of spiritual cultivation, as well as other aspects of kungfu training. As usual, the videos were taken impromptu, and are released here without editing.

This is the fourth part of the Series. The other parts can be accessed by clicking on the following: 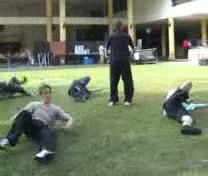 Some people may not realize that Shaolin Kungfu is also rich in throws. But before one practices throws, he should learn how to fall safely, otherwise he may hurt himself in his training. Breaking fall is a useful technique for this purpose. Untrained persons often try to stop their fall with their hand, which may result in fracturing the arm or dislocating the elbow. In breaking a fall, the hand should be the last part of the body to reach the ground. The head should hot hit the ground, or at least it should land on the practitioner's upper arm. The groin should be protected. However, when you know how to neutralize an opponent's throws, you will not need to use break-falls.

Felling Tree Together with Roots 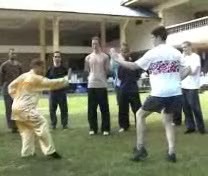 Normally it is not advisable for a smaller size exponent to throw a bigger-sized opponent. But here Grandmaster Wong purposely chooses Michael Ubel, who towers above him like a giant, to act as the opponent so as to demonstrate the effectiveness of the throwing technique called “Felling Tree Together with Roots”. Grandmaster Wong highlights the importance of ensuring the opponent cannot hit him (Grandmaster Wong) while he throws the opponent. He also demonstrate that a successful throw is not due to superior strength, but a skillful application of technique.

Confirming the Spiritual Teaching of Past Masters 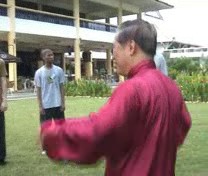 As usual, after the kungfu practice the participants go into chi flow and then enter Zen or meditation. After the standing meditation, Steve tells the class that he feels himself expanding beyond his physical body. Grandmaster Wong explains that it is spiritual expansion, and their experience confirms the spiritual teaching of past masters that our body is an illusion. He asks if anyone felt he did not have a body while in meditation just now. Leroy says that he did not feel this happened to his whole body, but he felt some parts of his body were not there.

Satori, a Glimpse of Cosmic Reality 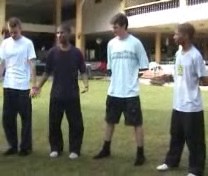 This is another extraordinary session where the participants have attained a very deep level of meditation. Leroy says that he found he did not have a physical body. Sifu Wong points out that this is a progression of his earlier attainment where he found some parts of his body were absent. Now the disillusion of the body is complete. Leroy directly experiences that his physical body is an illusion. This is a satori, a glimpse of Cosmis Reality.

Finer Points in Attack and Defence 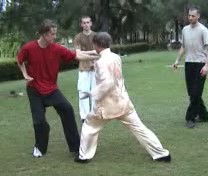 This video clip follows from the previous one where the course participants engaged in sparring. Sifu Wong observes them and highlights finer points to avoid weaknesses or to obtain advantages. He demonstrates the importance of “safety first” before moving in to attack. He also shows the advantages of using appropriate stances. Such fine points need to be demonstrated personally by a master; they are not feasible to be described in books. 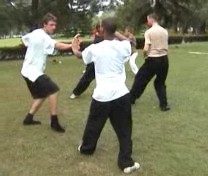 If we compare the sparring here with that shown in earlier videos taken at an early part of the course, we can see a tremendous improvement in the participants' combat efficiency. As shown in this video clip their movements are fast and spontaneous. None of the movements are pre-arranged, although for the purpose of this training session the participants' attacks are limited to hand strikes. 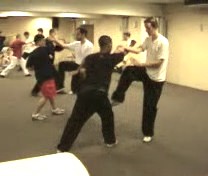 Many people have the mis-conception that kicks are unimportant in kungfu. In kungfu there are many different kicking techniques, which are often combat decisive. The Kicks are posefully inconspicuous but are very deadly. When faced with an upper and a lower attack simultaneously, the defender needs just to retreat to a False-Leg Stance to avoid the attacks, and strike the kicking leg using the tactic of “no defence direct counter”. 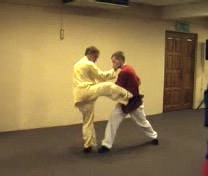 This kicking technique is called “whirlwind kick”. It looks like but is not the same as the round-house kick in Taekwondo. Unlike in Taekwondo, kicks in kungfu are purposely inconspicuous. It is very important to ensure one's safety before kicking. Notice how useful stances are. As Dave has controlled Grandmaster Wong's both hands, it appears that Grandmaster Wong has no way to block Dave's chop. Yet, by moving back into a False Leg Stance, Grandmaster Wong gets out of the difficult situation. Grandmaster Wong “threads” the chop. His defence is not a block. Had it been a block his arm could be broken by Dave's chop.

Understanding Principles of Attack and Defence 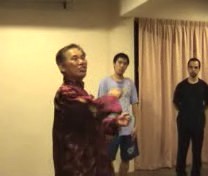 One important reason for the rapid progress of those attending the Intensive Shaolion Kungfu Course is that Grandmaster Wong explains to them how to make good use of combat principles. For example, instead of learning a counter for each and every attack, they learn the underlying principles of attack and defence, so that by applying the same basic principles but varying the responses to suit different situations, they can counter all attacks. 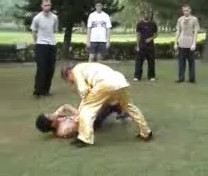 Shaolin Kungfu is also rich in throws. Here Grandmaster Wong shows a shoulder throw, called “Farmer Hoes Rice Field”. It is important to immobilize the opponent's hands before you throw him, otherwise he may gore out your eyes or tear out your throat! This throw is dangerous and may break the opponent's spine. Hence, in practice, and even in combat, we may let the opponent fall round our waist instead of over our shoulder so as to avoid serious injury on the opponent. This technique should be practiced under the supervision of a qualified instructor. 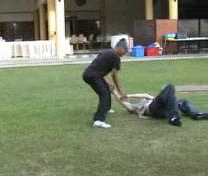 After Grandmaster Wong has highlighted a few crucial points of this technique, the course participants practice the shoulder throw. They take care to let the opponent roll over their waist instead of falling over their shoulder so as to avoid breaking the opponent's spine. 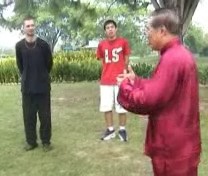 Charles gives an account of his wonderful experience. Chi flows up his spine and down the front part of his body, and his spirit expands into the universe. He feels tremendous joy and peace. Grandmaster Wong says that many people just read about spiritual expansion, but do not really know what it is because they do not have the actual experience.

To sum up the accounts of their spiritual experiences, Grandmaster Wong gives an invaluable explanation of the highest spiritual achievement. Originally we are one with Cosmic Reality, called variously by different people as the Buddha, God or other terms. Due to ignorance, we live in the illusion that we are separate entities instead of one continuous whole. The ultimate aim of spiritual cultivation is to free ourselves from this ignorance so that we will see our Original Face, or emancipate our spirit so that we will return to God.