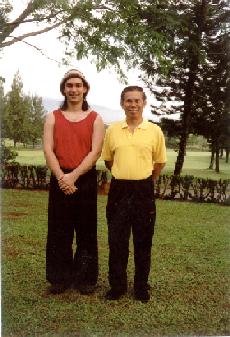 I am glad to hear back from you. I would like to relate a few stories I am working on after being inspired from your wonderful book of Zen.

This first story I wrote down after you had asked me my progress in an e-mail:

A monk was practicing in a forest when he came across four pieces of wood.
The first he recognized so he ate it.
The second he had only heard of so he placed it in his tunic.
The third he had never seen so he threw it as far as he could.
The fourth he could not see so the monk ignored it.

The monk was practicing in the forest when he came across the four pieces of wood yet again. This time he used them for kindling that which warmed his very heart. Who knew a piece of wood could be an empty mirror?


The second story, except for the last line, actually happened to me:

A teacher and his student were practicing in the forest when an old rotten tree came crashing down. "Wouldn't it be ironic if the tree had killed us while we were practicing?' asked the student.

'It would be good fortune!' replied the teacher.

'How would it be good fortune, honorable teacher?'

'If a tree fell in the woods and no one was there to hear it would it make a sound?', retorted the teacher. Just then a tree fell on him.


This last story was also inspired from real life.

It was the new year and Father gathered all his sons together.

'It is a new year, what plans do you have for the future, my sons?'

The third son spoke up first, "I will amass a store of gold and jade no one has ever seen father."

"I will build a pavilion in your honor, father" said the second son.

"I will rule the land with political savvy and diplomacy" replied the fourth son.

Everyone looked at the first son who said nothing, which was quite a surprise because usually you couldn't keep him quiet.

"What do you hope to do first son" repeated the father.

The first son smiled and proudly announced, "One day, I hope to have... a small wooden bowl!'

Thank you again Sifu for your infinite inspiration.