VIDEOS ON COUNTERS AGAINST WRESTLING -- OVERVIEW 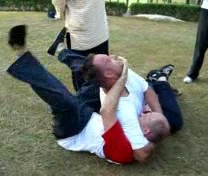 Sifu Kai demonstrating a counter against a Wrestling hold

A wrestler uses lifts or shoots to take his opponent down, then subdues the opponent with pin-downs. There are many Shaolin techniques to counter these Wrestling attacks.

Grandmaster Wong reminded the class that wrestling was a sport protected by safety rules. Without these safety rules, wrestlers would be exposed to dangerous counter-attacks.