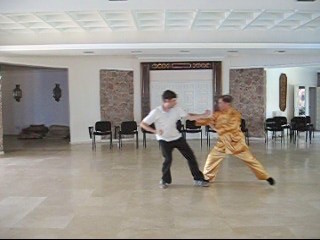 In this video clip, taken during a regional Taijiquan class in Spain in June 2005, shows Sifu Wong and Sifu Javier demonstrating how to move from “Playing the Lute” at left Four-Six Stance and at right Four-Six Stance to “Immortal Waves Sleeves” at right Bow-Arrow Stance.. This is a basic way of meeting an opponent moving in to attack. Notice that in the left-to-right mode, Sifu Wong first moves his front left leg backward, then moves his right leg forward to a desired position. In the right-to-right mode, Sifu Wong just moves his back left leg forward.