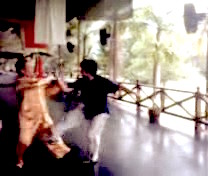 “Tan Tui” (pronounced like “th'an th'ui”) or “Spring-Kicks” is a well-known style of Northern Shaolin Kungfu famous for its kicks. After a training session during the Shaolin Review Course in December 2004 in Malaysia, Michael Chow from Shaolin Wahnam Canada who has won a few medals in international wushu competitions, asks Sifu Wong the combat applications of some Tan Tui techniques.

Sifu Wong explains that the strength of Tan Tui lies in its sequences rather than in its patterns, where a practitioner can attack an opponent using an appropriate sequence often regardless of the opponent's responses! First Sifu Wong asks Michael to demonstrate a Tan Tui sequence. Then he explains its combat application.