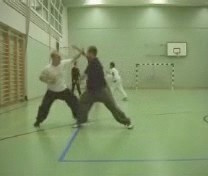 Here is another sparring session at Shaolin Wahnam Switzerland . Interestingly, this impromptu video clip filmed during a regular class taught by Sifu Andrew Barnett, exemplifies a fact that many kungfu students may have read but find it hard to believe, namely a master with internal force may floor an attacker simply by warding off his attack. At the start of the video clip, a female student attacks Sifu Andrew Barnett with ?Black Tiger Steals Heart?. Sifu Andrew Barnett responds with ?Dark Dragon Draws Water?, which is found in Sequence 6 of our Shaolin Wahnam Sparring Methodolgy. Although Sifu Andrew Barnett controls his attack, the attacker falls onto the ground, not due to his attack but due to the force of his other defending hand, albeit purposely reduced under his control.

The sparring shown in this video clip is similar to that shown in other video clips. This is because the practitioners train the same type of kungfu and employ the same sparring methodology. In other words, anyone using the Shaolin Wahnam Sparring Methodolgy correctly would be able to spar like those shown in the video clips, i.e. using typical kungfu techniques and skills — and not using Kickboxing techniques or bouncing about like Boxers. Similarly anyone using an appropriate sparring methodology in Taijiquan, Hoong Ka, Wing Choon, Praying Mantis or any kungfu style would be able to spar and fight using his own style. Such sparring methodologies were used in the past, but today they are extremely rare. So if you wish to spar using your own kungfu style, you have to find out an appropriate sparring methodology, or, albeit a poor alternative, work one out yourself. Hopefully, our video clips will provide you with some help.