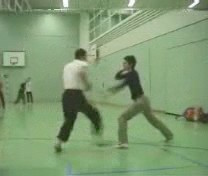 This is a sparring session at Shaolin Wahnam Switzerland , taught by Sifu Andrew Barnett. Those who have seen a few of our video clips on sparring may wonder why they look similar, regardless of whether they were taken in Switzerland, Ireland, Canada, Germany, Costa Rica or elsewhere. The answer is straight-forward. Of course they are similar because they all come from the Shaolin Wahnam Sparring Methodology. In fact this reflects an important point we have been advocating, i.e. those trained in kungfu should spar or fight using kungfu, not using Karate, Kickboxing or any other martial arts. To go a step deeper, those trained in Shaolin Kungfu or Taijiquan would spar or fight using Shaolin Kungfu or Taijiquan, not using Pak Mei Kungfu or Baguazhang.

To go even deeper, those trained in Shaolin Wahnam (whether in Shaolin or Taijiquan) would spar or fight using the skills and techniques learnt in Shaolin Wahnam. This leads to another question. Can those trained in other schools or systems benefit from watching video clips on Shaolin Wahnam Sparring Methodolgy? Of course they can. They may, for example, apply the principles explained or shown on our video clips to their own styles or systems. They may, for example, learn how to use their own techniques for defence, instead of merely punching and kicking wildly. The principles are the same, but the sparring will be different because they use the techniques of their own schools or systems.