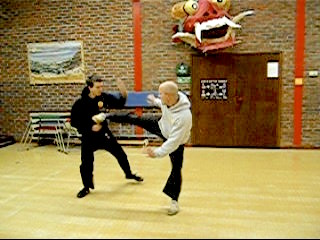 Some of those who watched Mark and Simon spar in the video clip Combat Sequence Training — Sequences 5 to 8 may wonder why they did not use any kicks. The reason was that that combat training session was meant to train hand attacks and defences. Then, how would one defend against kicks? A student at this stage would not be able to do so effectively because he has not been trained yet. Training in kicking attacks and defences is in the next stage, Combat Sequences 9 to 12, as shown in this video clip.

Here, as in the earlier Combat Sequences 5 to 8, all the moves are pre-arranged. Can these students defend themselves if their opponents attack them randomly? Not likely because again they have not been trained yet. Random attacks and defences will be trained at a later stage. Such stage by stage progression is a key factor in systematic combat training, which will eventually lead to effective free sparring and real fighting. Going straight to free sparring without systematic preparation is a sure way to fight like children.