A SNAKE, A KICK AND ANOTHER SNAKE 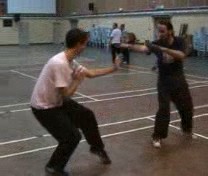 A Snake, a Kick and another Snake

Joshua who specializes in Shaolin Five Animals works on his Snake form against Mark who specializes in Dragon-Tiger. An effective combination of techniques Joshua has adopted is a Snake jab, a kick followed with another Snake jab. Mark deflects the first Snake jab, and grips the kicking leg. What would you do when your kicking leg is held. Joshua follows with his second Snake jab as planned. Mark is hit and learns from his mistake. When Joshua applies the same combination again, Mark is able to counter all the three attacks.

A Snake, a Kick and another Snake from Wong Kiew Kit on Vimeo.