HOW WOULD A SHAOLIN EXPONENT COUNTER AGAINST THE FOLLOWING KARATE ATTACKS 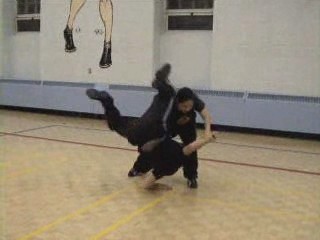 A reader from Germany, Sammet, asks Sifu Wong to explain how a Shaolin exponent would counter the attacks shown on the pictures below. Please see Question 1 of the November 2005 Part 3 Question-Answer Series.

Sifu Wong posted the question to his disciples attending the Special Shaolin Kungfu Course in Toronto in October 2005, and they responded with numerous counters. Some of these counters are presented below in video clips for those who wish to apply kungfu patterns for combat. 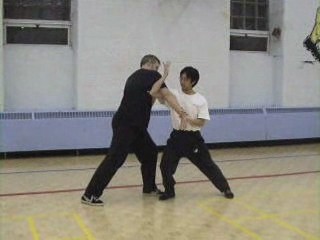 Sifu Gordon Pfeffer chops at Michael Chow's neck using a pattern called “Carp Skims through Water”, which is similar to “Devil King Waves Fan”, except that in the “Carp” pattern the attack is a palm chop whereas in the “Devil King” pattern it is a palm slap. Michael wards off the attack, immobilizes Gordon's attacking arm and throws him over the hip using the Shaolin pattern “Cross Hands Lock Arm”. Gordon is a Shaolin Wahnam kungfu instructor in Canada and Michael is a former international wushu champion.

Another effective counter against the head lock from behind is demonstrated in this video clip. David attacks Emiko with “Double Dragon Plays with Pearl”. Emiko retreats her leg to neutralize David's advantage, then throws David over the shoulder using “Farmer Hoes Field”. Take note that both the attack and the counter patterns shown here are deadly. The head lock may result in breaking the opponent's neck. The shoulder may result in breaking the opponent's spine. Either technique can kill or maim an opponent. These techniques must not be attempted by untrained persons. Here Emiko and David are not hurt because they are both well trained. Both of them are also former international wushu champions.. 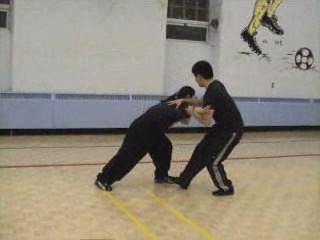 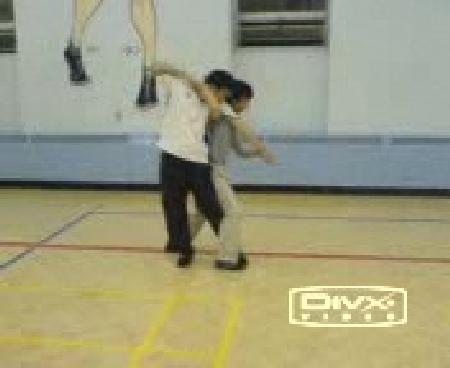 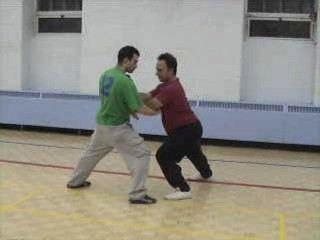 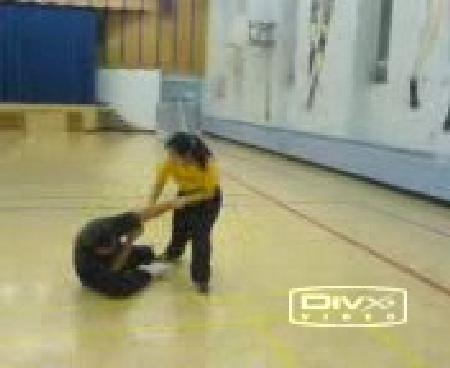 Another Shaolin counter against a horizontal chop to the throat is as follows. Anton sweeps at Emiko's neck with “Horizontally Sweeping a Thousand Soldiers”. Emiko moves a leg backward to reverse Anton's leverage advantage and presses him down with “Lohan Tames Tiger”, breaking Anton's arm if desired. A good stance and good footwork are necessary for this counter. 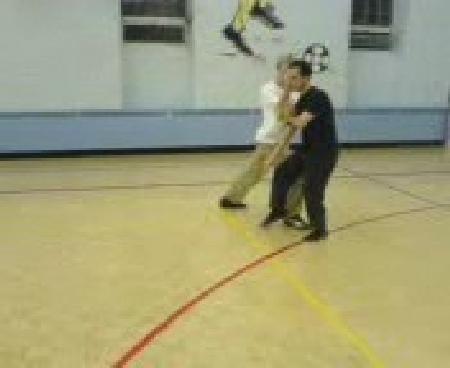 A simple, direct and effective counter against an attack at the groin with the pattern “Monkey Steals Peach” is shown by Alex. As Joe attacks Alex with “Monkey Steals Peach”, Alex “sinks” back to avoid the attack and counters with “Reverse Hanging of Golden Lotus”. Agile footwork is necessary for this counter. 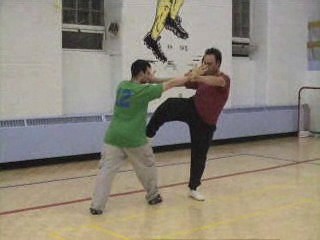 Sifu Anton Skafar demonstrates another simple, direct and effective counter against a horizontal palm chop known in Shaolin Kungfu as “Carb Skims through Water”. As Eugene attacks with the palm chop, Anton responds with “Single Leg Flying Crane”, warding of the attacker's two hands and simultaneously kicking his groin. Sifu Anton is a Shaolin Wahnam kungfu instructor in Canada, and Eugene is a Shaolin Wahnam organization of USA.

How would a Shaolin Exponent Counter against the Following Karate Attacks from Wong Kiew Kit on Vimeo.