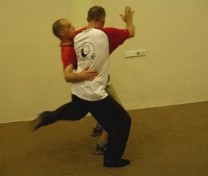 Sifu Kai applies the Shaolin pattern “Yun Tian Tames Tiger” to counter a hip throw attempted by Sifu Mark. (Yun Tian is one of the Chinese gods of wealth. He is a warrior and has a black face.) In Wahnam Taijiquan this counter can be effected by the pattern “Black Bear Sinks Hips”. Notice that Sifu Mark has locked both of Sifu Kai's hands, but Sifu Kai skillfully uses body movement to unbalance Sifu Mark.

Please click the picture or the caption to view the video