OVERVIEW OF WARRIOR PROJECT ON THE BLUE MOUNTAIN

In this respect we are very lucky as the Chairman of our Warrior Project Committee, Sifu Kai Uwe, being a master of many other martial styles and winner of more than 200 sparring competitions, has brought his rich experience into the Warrior Project courses.

On the first day of the Warrior Project on the Blue Mountain, course participants learn the four main Wrestling pin-downs and their counters. Video clips for most of these lessons, unfortunately, are not available.

Felling Techniques on Ground and Counters against Pin-Downs 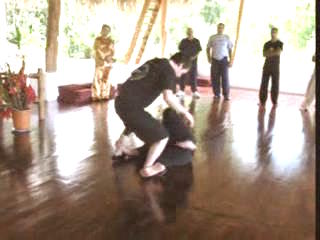 A main Wrestling pin-down, similar to the Shaolin pattern "Lohan Taking a Noon Nap", is shown. If you have one hand free, you can counter the pin-down using the pattern "Golden String Hands Gourd". If both your hands are locked while you are being pinned down, you can counter with "Gold Coin Spinning on Ground".

Having Fun with Throws, Pin-Downs and Counters 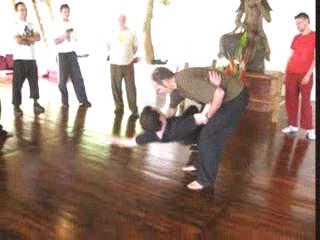 How do you apply a pin-down on an opponent? Firstly, you have to throw him onto the ground. The movement, especially the connection between the throw and the pin-down, should be smooth. Course participants have a lot of fun practicing the various pin-downs and their counters. In our school, gender is not a problem in countering a pin-down. It is heartening to see elegant ladies overthrowing hefty men who have successfully pinned them down.

Breaking Fall can be a Lot of Fun 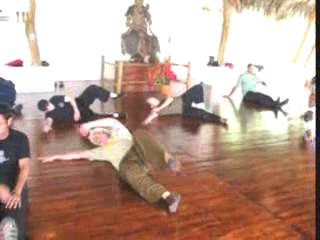 Depending on how you fall, falling down can be a lot of fun or result in a broken arm. Firstly, Grandmaster Kai Uwe explains how you should not fall, like hitting your elbow or ankle on hard ground. Then he explains how you can break your fall with your palm. Course participants enjoy the fun falling, progressively from sitting to standing at a fairly high position.

From Riding Dragon to Pushing Cart 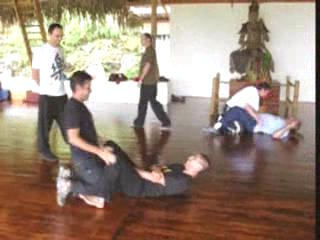 Counters against the Punches from a Mounted Opponent 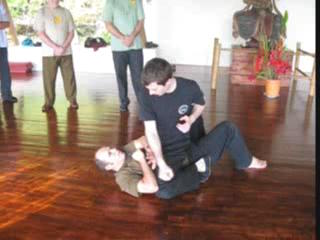 When an opponent mounts on you, frequently he will rains punches on your face. An effective defense is to use "Kitten Wipes Face" to brush off his punches. You need to co-ordinate your head movement with your hands to avoid his punches. Then you can grip his arm with a Tiger-Claw, and using the pattern "Beauty Turns Shuttle" flip him over 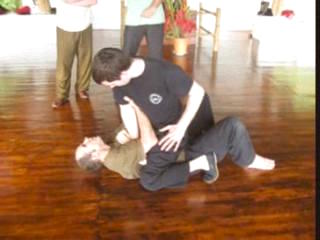 It is necessary to turn your head accordingly as you use the pattern “Kitten Wipes Face” to deflect the punches of a mounted opponent. Then you can grip his arm with a Tiger-Claw, using the pattern “Beauty Turns Shuttle”, and flip him over. It is recommended that you flip him over to the same side of his held arm so that he could not support his fall as his arm is being held by your Tiger-Claw. 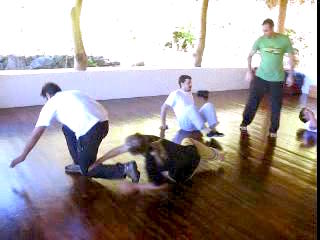 You would be pleased to know that all the fundamental Wrestling pin-down techniques are found in Shaolin Kungfu! They are in the patterns "Lohan Taking Noon Nap". "Frog Crouching on Ground", "Lohan Riding Dragon" and "Old Man Pushing Cart". You can also fell your opponent while you are on the ground. Effective techniques are “Lazy Monkey Breaks Branch", "Naughty Monkey Brushes Leaves" and "Golden Snake Creeps on Ground".

Felling Opponents while Still on the Ground 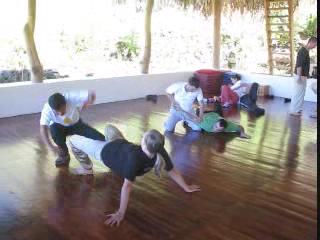 While you are lying on a beach, how would you fell a threatening opponent without you even getting up? You can use the Leg Shove, known in Shaolin Kungfu as "Lazy Monkey Looks at Sun", or the Creep, known as "Golden Snake Creeps on Ground". When you apply the Creep, ensure your head is on the outside so that your falling opponent cannot kick you accidentally.

All Fundamental Throws can be Found in Shaolin Kungfu 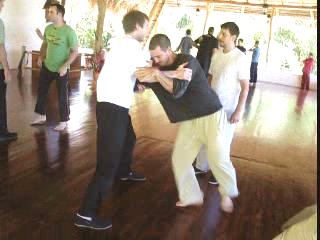 There are countless ways of throwing an opponent, but all these countless ways may be classified into four categories -- backward throws, forward throws, sideway throws and upward throws. All these fundamental throws are also found in Shaolin Kungfu. Interestingly, some kungfu practitioners (not Judo exponents) from other schools are angry when Grandmaster Wong makes this truthful statement. But as Grandmaster Wong has often said, this is their problem, not ours. Our "problem" is to benefit from this truth, so generously taught in our school.

Some Interesting Ways to Fell Opponents 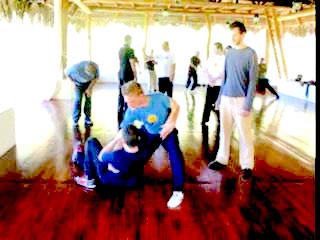 There are many interesting ways to fell your opponent. You may use your stances, for example, like the Horse-Riding and the Bow-Arrow. Or you may use your footwork, like merely moving a small step forward. The position of your dan tian is very important in effecting a successful throw.

Throwing an Opponent when he Tries to Throw You 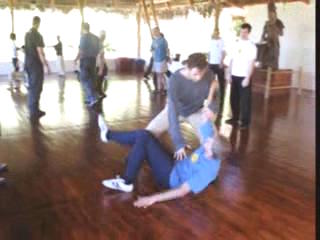 Isn't it interesting that when your opponent attempts to throw you, he finds himself being thrown onto the ground, often without knowing how you could do it? It is even more interesting that in our school the "opponent" finds it a lot of fun, instead of being frustrated at failing in an attack. An effective technique for this purpose is to apply the Shaolin pattern "Tame Tiger while Listening to Wind". Wahnam Taijiquan exponents will recognize this as "Black Bear Sinks Hips".

Covering your Opponents before Throwing Them 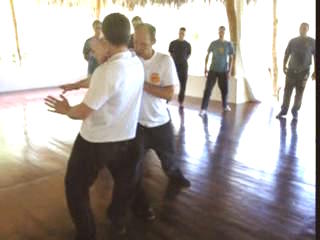 It is very important to cover your opponent adequately as you throw him. This precaution is often neglected in sports like Judo. But in a real fight, if you neglect this important kungfu principle of "safety first", you expose yourself to risky counters from your opponent. Grandmaster Kai Uwe demonstrates with an example from Mirror Hand.

Tame Tiger while Listening to Wind 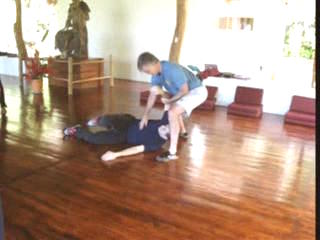 How would you release yourself and then fell your opponent when he has held your hands or grabbed your neck? Grandmaster Kai Uwe reveals some finer points in these counters known as "Tame Tiger while Listening to Wind", or "Black Bear Sinks Hips" in Taijiquan. Course participants have a lot of fun applying these techniques in combat.

Applying Throws in Combat - Irrespective of Age, Size and Gender 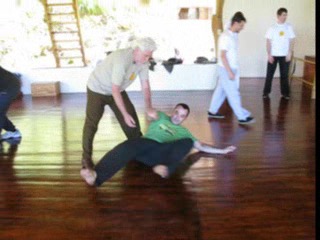 Course participants enjoy themselves applying felling techniques and their counters in sparring. In everyday situations, a strong man has many advantages over a dainty lady in combat. But, true to kungfu philosophy, if you have the appropriate techniques and skills, age, size and gender are not decisive factors. It is interesting to see exponents throw their opponents half their age or double their size. 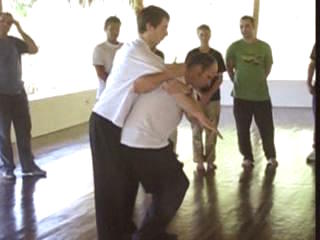 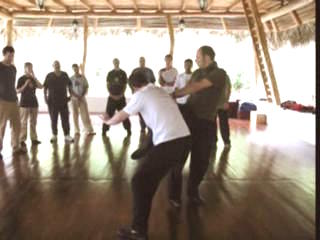 Course participants learn various counters against throws. One effective counter is the Shaolin pattern "Taming Tiger while Listening to Wind", which is similar to "Black Bear Sinks Hips" in Taijiquan. Next, they learn how to counter against the counter, like employing Butterfly Palms. Then, to continue the interesting combat application, the course participants counter against the second counter, like using "Golden Cockerel Stands Solitarily", manifesting the saying "Marvelous techniques beget marvelous techniques".

Different Types of Throws and their Counters 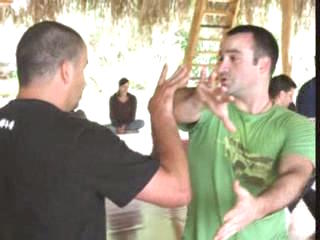 The many different types of throws can be classified into four main categories, namely forward throws, backward throws, sideway throws and upward throws. Upward throws are shown in another lesson. Here, participants practice the three kinds of throws and their counters. Forward throws can be executed by "Farmer Hoes Rice Field" and "White Ape Fells Tree", backward throw by "Bail Moon from Sea Bottom" and "Taming Tiger Listening to Wind", and sideway throws by "Move Unicorn Step".

Throwing the Thrower - Even When your Hands are Locked 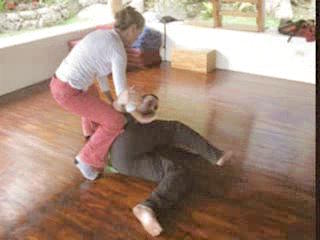 Isn't it interesting that when someone wants to throw you, at the time when he thinks he has successfully executed the throw, he finds himself being thrown onto the ground instead, often not knowing what has happened? It is even more interesting when the attacker is much bigger-sized than you. It does not matter even when both your hands are locked by the attempted thrower.

Size is Immaterial - Even in Throws 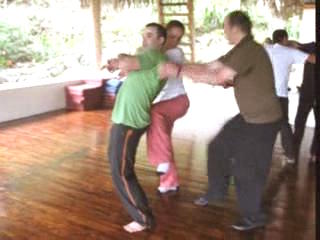 We often mention that in genuine kungfu size is immaterial, i.e. a small, elegant lady can defeat a big, hefty man. It is most illuminating to see the truth of this statement manifested in throws. Generally, a small lady would have little chance against a hefty man both in executing or defending against throws. But here we see our elegant ladies throwing giants about, even when their arms are locked. It is illuminating too to see throwers being thrown onto the ground, often without their knowing what has happened. An effective counter against sideway throws is also shown.

It is Often Kicks that Decide Combat 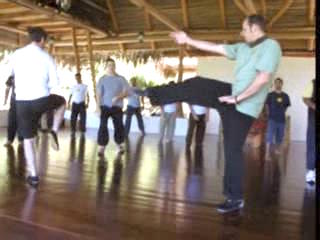 There is a kungfu saying that "The hands open the way, it is the kicks that decide combat". Nowadays, understanding kicks and being proficient in countering them are topical as many people, almost irrespective of what martial arts they practice, use Kick-Boxing in their sparring and fighting. The five major types of kicks are reviewed. They are sideway tiger-tail kicks, frontal thrust kicks, organ-seeking kicks, whirlwind kicks and high kicks. Two effective counters against kicks are Hiding Flowers in the Sleeves, which traps the kick, and Single Whip Saves Emperor, which strikes the kicking leg. (However, only a few videos on kicks are available.)

Brushing off Boxers' Attacks and Counter-Striking Them 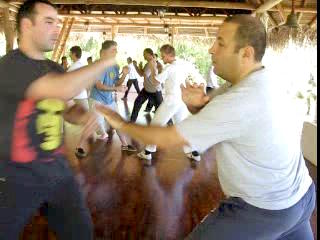 If you wish to be combat efficient, you need to be able to handle Boxers comfortably. This is because today most people, irrespective of the styles of martial art they practice, resort to Boxing in their sparring and fighting. Some effective ways to handle Boxers are shown here. Firstly, you need to be fluent in your footwork, so that you can roll back agilely with a Boxer's advance. Then you brush off his punches and counter-strikes him. "Double Bows Tame Tiger" and "Dark Dragon Draws Water" are excellent patterns to apply. 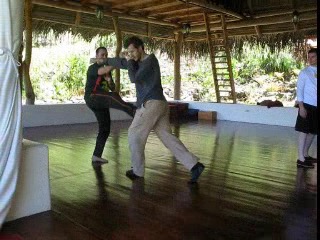 A strong point of a Boxer is his speed. You can minimize his strength by covering or dodging his strikes, and attacking his weakness, which is his limitation of techniques, such as against kicks. Intercepting his strikes and simultaneously counter-striking, like using Double Bows Tame Tiger is effective. Another effective counter is to tempt him to attack, then surprise him with an unexpected kick. 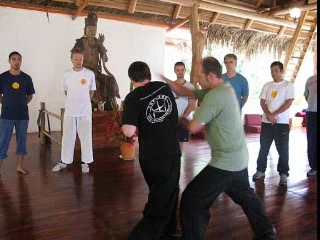 Although a Boxer is fast in his jabs and crosses, we can strike him often before he can realize it. This is achieved not by trying to be faster than him, but by a skillful use of tactics. In other words, we have faster tactical speed although the actual movements of techniques may be slower. Two examples are shown here. Do you know what they are? One way is to use "Double Bows Tame Tiger" and another is "Big Boss Offers Wine".

How are these Odd Patterns used in Combat? 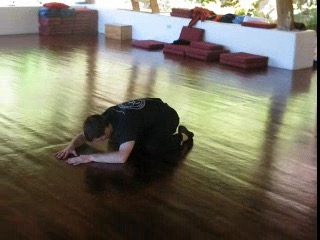 The many techniques learnt in the Warrior Project are now linked to form a set, Lohan Walks in the Garden of Timelessness. Many people would be surprised at some of the patterns and wonder if they have any combat functions. How do you think, for example, the patterns "Black Snake on Ground" and "Crouch to Open Door" are used in combat?

Lohan Walks in the Garden of Timelessness 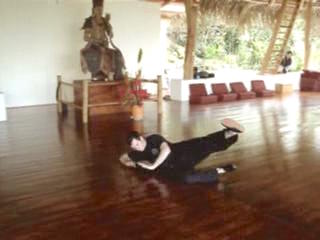 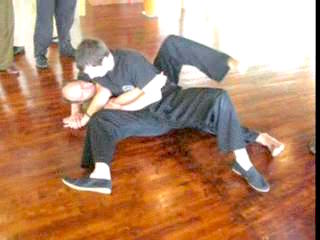 This is the second day of the Warrior Project on the Blue Mountain where Grandmaster Kai Uwe explains how to counter a Wrestling Pin-Down known in Shaolin Kungfu as "Lohan Taking a Noon Nap". (We are sorry that videos of the first day are not available.) It is heartening that with proper techniques, elegant ladies can release themselves from pin-downs of hefty men.

Warrior Project on the Blue Mountain 15th to 18th March 2009