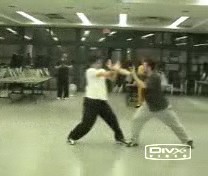 Eugene first thought of using a “hand sweep” to counter David's side kick, but changes his mind and uses “Dark Dragon Wags Tail” instead to tempt the attack to press on. David probably senses Eugene's trick, but decides to “play” along with it and press on with a “Leopard Punch”. As soon as Eugene responds to it, David turns this attack into a feign move and kicks at Eugene knee instead. Eugene responds with “Single Leg Hand Sweep” and presses back with a level punch.