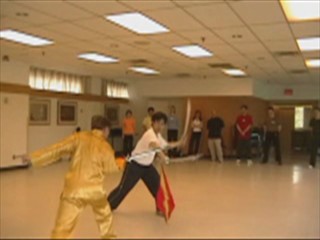 Applying the sword to handle a pair of sabers

Grandmaster Wong's application of the sword was so skillful that someone asked whether he practiced the sword very often. He surprised everyone present when he said that the last time he used the sword against another weapon was at a public demonstration at the Science University of Malaysia more than 20 years ago.

This shows that once you have understood the basic principles and have developed the fundamental skills, you can apply them to different techniques in different situations. In other words, had Grandmaster Wong used another weapon, like an axe or even a stick, he would still be able to use it effectively. This is an example of the superiority of “smart training” over “water-buffalo training”.

The course participants were so impressed with the amazing application of the sword that one of them asked whether the sword would beat any other weapons. Grandmaster Wong explained that it was the skills of the combatant rather than the techniques of his weapon that decided victory.

Grandmaster Wong may not have practiced the specific sword techniques he used in the combat, but he maintains his regular Shaolin practice in general, which improves his fundamental skills like mental clarity, quick decision making, being relaxed and focused at the same time, energy flow, internal force, agility and fluidity of movement — the very skills that many other kungfu practitioners neglect or are unaware of, and the very skills that not only enhances combat efficiency but also our daily life. This is another great secret of “smart training”.

One after Another, or Both Together

Overcoming the Speed of Double Attacks

A single saber is already fast. Using double sabers skillfully is like doubling the speed. When you are engaged with one saber, the other saber comes at you. When you disengage from the first saber to handle the second, the first saber attacks you again.

Even if your opponent's speed is the same as yours, you have to move doubly fast to meet his double attacks. But there are also other ways besides increasing speed to handle double sabers.

Skills are More Important than Techniques

Sifu Michael Chow now uses a sword against Grandmaster Wong's spear. Sifu Chow employs the same principles and techniques of the sword to counter a spear, like circling to control the spear, and slicing the spearman's hands.

But Grandmaster Wong neutralizes Sifu Chow's attacks and counter-attacks effectively, demonstrating that skills are more important than techniques in combat. Notice also that instead of thrusting the spear into an opponent, Grandmaster Wong uses the spearhead to slice him, which of course is more compassionate.

Notice that Grandmaster Wong changes his front-holding hand from left to right, and vice versa. By using footwork and the circling technique, Grandmaster Wong is able to keep Sifu Chow at bay, which is crucial because in close combat the sword is much more advantageous than a spear.

He also employs the circling technique skillfully to break into the sword defence, but he compassionately slices the spearman's arm instead of piercing the spear into him.