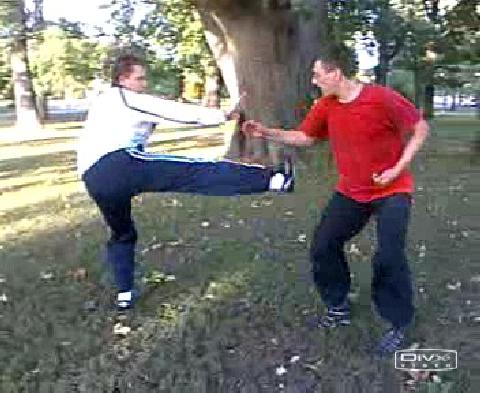 Would you believe that participants at the Finland Regional Shaolin Kungfu Course of September 2006 could spontaneously use kungfu patterns for free sparring after just three days of training?

That was what the course participants did. We did not purposely plan to record the free sparring to show outsiders, but Sifu Markus' father came to visit us with a camera and he took some video at random. The video clips below recorded the free sparring session towards the end of the three-day course, and are released here without editing.

As expected, some of those used to uncontrolled and often brutal exchanges of blows and kicks in free sparring will not be impressed with our way of free sparring, and may criticize it as being ineffective for real fighting. That is not our concern, and we also don't have to waste time arguing with them. As it is often said, we respect other people's ways of training in the manner they think it best for them.

Our concern is to provide a review of what we did so that we can improve on it. We also hope to inspire those who wish to use their kungfu patterns for free sparring instead of using Kick-Boxing or other martial techniques that it is certainly possible to do so if they know an appropriate sparring methodology.

All kungfu styles in the past had their own sparring methodologies, but for various reasons most schools today have lost theirs. This is a fact, otherwise they would be using kungfu patterns for sparring instead of Kick-Boxing. Records both in pictures and in writing of how kungfu practitioners of various styles in the past used kungfu patterns to fight are still extant today.

We have explained in some details in our various webpages our Shaolin Wahnam sparring methodology, as well as the instructional steps in preparing the participants in these regional Shaolin Kungfu courses for free sparring using kungfu patterns. Those who think our method may be useful to them are welcome to try them for themselves, irrespective of whether they learn personally from us, and irrespective of whether they acknowledge our source.

Of course it will be unrealistic and unreasonable for them to attain this in three days. But if they persist, they will eventually succeed — even after a few years. We shall be happy to know that by attempting to use kungfu for sparring they become part of the process in restoring the former glory and combat effectiveness of kungfu.

Our Shaolin Wahnam sparring methodology is strictly speaking not exclusively ours, just as the kungfu patterns we practice are not exclusively Shaolin Wahnam patterns. Although there were local or individual differences between schools, all kungfu schools generally used a similar approach in preparing their students to spar, namely learning the correct kungfu forms, applying the forms in pre-arranged sparring, then systematically progressing to free sparring.

While we are not interested in explaining or proving to those who doubt whether kungfu can be effective for fighting, it is helpful to address this question to our own students as well as those who share our philosophy. Of course the kungfu sparring methodology works. It worked for generations of kungfu practitioners in the past, and it has worked for us in the present. While we are idealistic in our aspiration, we are also very pragmatic in our training. If any exercise does not work, we would have discarded it, or more precisely our early masters would have discarded it. (Please note that this is a different situation from kungfu practitioners discarding kungfu forms for Kick-Boxing. In their case, it is not that their kungfu forms cannot work, but that they do not know how to make their forms work.)

Some of the participants in the free sparring video clips presented here and elsewhere are formidable fighters in other styles of martial arts or in free-style fighting. Actually, had they used their former ways of fighting instead of the kungfu patterns shown in the video clips, they would have more easily defeated their sparring partners. Then, why do they use the kungfu patterns?

It is because they know that this sparring methodology will bring them to higher levels which their random exchanging of blows and kicks would not. An analogy would make this clearer. Suppose you are used to typing with just two fingers. When you first learn to type with all your ten fingers, you will be less effective than with two fingers, but you know that with systematic training and practice you will surpass what just two fingers can do.

There are other more important and more meaningful benefits. The free sparring recorded here was practiced by the participants after a few hours of other types of training. Yet, they were still mentally fresh and not tired. Had they sparred the way they used to do, they would be panting for breath after fifteen minutes and would have hurt one another. Here, free sparring like any other aspects of our kungfu training, is a training of energy and mind. It is certainly better than punishing your sparring partners and yourselves with a generous exchange of blows.

We would like to thank Mr Kahila senior for recording the videos.