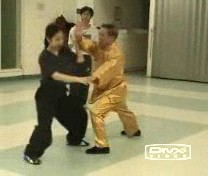 As Emiko and Michael work on the sequences, Sifu Wong shows how they can improve both the techniques as well as the tactics in combat. An example each can be found in Part 2 and Part 3 of this Dragon Style series.

In this video clip Sifu Wong shows the progression from big movements in practice to small movements in combat using the pattern “Green Dragon Shoots Pearl” as an example, and how a skillful exponent may exploit the weakness of an opponent making a big movement.

Hence, by working on the combat sequences which they themselves have composed from their specialized set, Emiko and Michael have progressed remarkably from the basic level of combat sequences 1 to 16, to more advanced levels where a greater variety of skills and techniques are used.